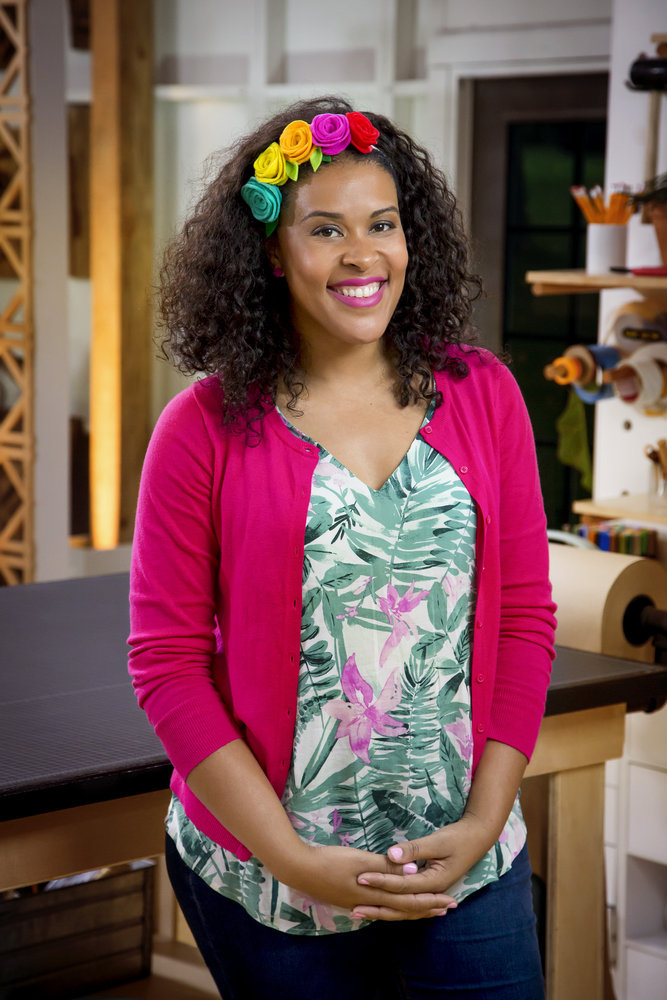 Amber Kemp-Gerstel is super enthusiastic. In conversation, she has the humorous timing of a stand-up comic, but she is not. The Miami, Florida resident is a former clinical psychologist-turned-maker, blogger, influencer and now TV star when Making It debuts on TV on NBC, Tuesday, July 31. The show goes deep into the world of crafters as they make and compete against each other in this six-episode series.

Kemp-Gerstel talked to BGN about her life-changing “aha moment” when she went from professional psychologist to professional maker, the importance of crafting, and just what it takes to make it, all in her own naturally funny, frank way.

BGN: Weren’t “Makers” referred to as crafts artists or even craftsmen just a short while ago, what do you think changed?

Kemp-Gerstel: I think people go by different names depending on what they do. So you might call yourself an artist, a crafter, a knitter, a seamstress. I think “maker” was the term used because it’s all-encompassing. The show really does encompass all sorts of crafting, so I think that covers everything.

BGN: Why do you think a show like this is ready to come to the forefront?

Kemp-Gerstel: I’m an interesting person to ask about it. This is the show that I’ve been wanting to happen forever! As someone who’s creative and always has been, I’ve always wished there was a reality show for crafting. There’s a reality show for home decor, there’s been fashion, but there’s never been straight-up crafting done in a really refined way. So I’ve always wanted the show to exist.

Beyond that, if you are not a maker, it’s just a positive. It is a positive show. Something that families can watch together and feel like they can lead from that. And, like they can do something. If you watch a fashion show, it does not mean you’re going to go and pick up a needle and thread and make a dress. I think from this show, you really will leave feeling empowered and want to break into your own thing.

BGN: How many years have you been crafting?

Kemp-Gerstel: I’ve been crafting, in some regard, all my life. I left my job as a child psychologist to pursue life as a crafter, blogger, influencer, and television personality; and through my business, probably over the last three years, is when it all came to a head and allowed me to pursue it full time. Before that, I was doing it more as a hobby. But it’s been about three years. But truly, it’s been a lifetime of making in some way.

BGN: You quit your career as a psychologist to do this and your husband was very supportive. Tell us about that.

Kemp-Gerstel: He was right there along with me. There was certainly no point in which I made this decision by myself, to leave my career to pursue blogging. He’s been with me ever since I started my blog as a hobby. And everyone else around me, including him, probably thought, ‘well, it’s a hobby, it’ll come, it’ll pass.’

I think he saw the passion and the dedication that I put into it, and the way I treated it like a business. I think he knew, if given the opportunity to pursue it full time, that I would treat it like a business and really pursue it and grow it to its highest potential. He saw that in me and knew that if we could have the opportunity for me to leave my job, that it would make sense.

We talked a lot about it. I struggled with it and he also saw how stressed I was working full time as a psychologist and full time as a crafter and a blogger, so he knew that something had to give. So we gave it a plan.

I saved up a year’s salary before I left my job. At least I knew I had a year to give it a shot and if it didn’t work, I’d go back to work. I took a year to build my business and it was successful and it kept growing from there. He is, hands down, my biggest supporter. Anyone else who was that big of a supporter would have to be a stalker because it would be weird.

BGN: I assume, people in your local area (Miami, Florida) know you well for doing this by now?

Kemp-Gerstel: There is an audience here, but the people who follow me are all over the world. I’d be shocked if people in Miami know me, … actually, that’s a lie. Let me not be lying to you (laughs). This happens infrequently, but last week I was at Ikea and someone came up to me and said she recognized me. It’s usually at a crafts store or a hardware store where people will recognize me, but it’s not common.

Kemp-Gerstel: I can leave my house and most people do not care who I am, that’s for sure.

BGN: What, in particular, do you think viewers will get a chance to see that they haven’t with any other show of this type?

Kemp-Gerstel: This is a show that is fully dedicated to being uplifting and showing creativity. There are morning shows where you might see a crafting segment. We are going full in on making and that is what you are going to get for an hour every Tuesday.

It is unlike anything that has ever been out there, even in the past where there’s been crafting shows. This show is not only about crafting, but the products they make are really good. They’re high quality. They’re stuff that you would want to have.

I think it’s going to take away the misconception that crafting has to be junk. It’s beautiful stuff. It’s things you want to know how to make yourself, so that’s as good as it gets.

BGN: What kind of person gravitates towards making, either as a hobby or a career?

Kemp-Gerstel: Consider who you are asking. In my line of work, I truly believe that everyone has a creative streak. The worst thing you could say to me is, ‘I am not creative,’ because I will spend the next 20 minutes telling you otherwise.

Not everybody has to be well-versed in a bunch of techniques. They just have to be creative. The person who can be a maker is every single person you ever met in your life. It’s just, are they willing to give it a shot?

BGN: How prepared were you for the competition drills that they put on each show, making makers race the clock to create the best presentation?

Kemp-Gerstel: I am not used to crafting against the clock at all! I’m not the type of person who’s going to be super-competitive with anyone but myself. I went in there wanting to really make things that I would be proud of—something that I would proud of for my own website and the time limit … you know I’m in the business of making things that feel doable. So the time limit didn’t, for me, seem super stretched.

The biggest challenge is being creative on such a big platform consistently and delivering consistently. You get to a point where, ‘ok, I’m fresh out of ideas. I don’t have anything else to show you, I don’t know what else you want me to do.’

BGN: What do you think the contestants will take away from the show, either way?

Kemp-Gerstel: I think that varies so much. A big part of the show is watching our journey. I came out of the show a different business owner, maker, and influencer than I went in. It changed the way I think about what I can do and what I am capable of.

If I can do what we were asked to do, there’s really no creative challenge that I can’t tackle. I now believe that. You can’t shake me with a challenge at this point because you’ll see that there is some stuff that they throw at us that we’ve all never done before.

So if I can do that on a television show, then I can basically do anything.

Making It premieres July 31 on NBC.