It’s always interesting to interview an interviewer. Not because they’re cagey—quite the opposite. They’re too relaxed. Anna Deavere Smith is gratefully accepting an espresso as I sit down and ask if it’s okay to open my laptop for my notes. She’s seated across from me, maintains excellent eye contact, a formal but gracious presence, with a fierce and searching intelligence which actually prompts me to talk much more than any other interview I’ve ever conducted.

Ms. Smith’s production Notes From The Field, adapted from her one-woman, many-voiced show for HBO, airs tomorrow (you can read the BGN review right here). The previous night found her sharing the stage with Valerie Jarrett and Van Jones at 92Y, two notable personalities who came to honor her as a guest and take part in a Q&A. I was not familiar with Smith, in my own ignorance (which is far-reaching), but her production captivated and moved me. She clearly has an attention to detail and the nuances of people, which made me feel constantly “read” as I spoke with her, though arguably this was all in my head.

I could’ve spoken for an hour, easily, even though, from our first question, she had the reins. In the following interview we would somehow effortlessly thread avant-garde minimalist music with hip-hop, rain dances, and Shakespeare. And words, the magic of words, something consistently present and central to her unique artform.

I have a feeling much more of the world will know Anna Deavere Smith by 8pm tomorrow, when Notes From The Field airs on HBO. For now, let’s listen and learn from this brilliant artist and performer in American theater.

Leonardo Faierman: Probably one of the first things that jumped into my head when I saw Notes From The Field was something about it being like sampling in hip-hop. I was wondering if that was a connection you make, or if you had any kind of relationship to hip-hop in this way.

Anna Deavere Smith: Well, no. I was working like this well before hip-hop was hip-hop.

Leonardo: So hold on. Wait, maybe I should ask: have you inspired sampling in hip-hop? [laughs] Maybe I should reverse the question a bit…

Leonardo: I think this was happening at the exact same time…Maybe there’s something magical here.

Leonardo: As hip-hop. I mean, post-Grandmaster Flash…that would’ve been like, 1978 or so? That’s interesting.

Anna: I think, for sure, I couldn’t do what I do if the tape recorder hadn’t been invented. The one I used was much bigger then, though.

Yeah, well…that’s interesting. So, what does that mean? What would lead me to what I’m doing, and what led others to hip-hop?

And so, in Notes From The Field, you’ve honed it, and you are a sampler, in a way. It’s filtered through you and made different, changed. But I think there’s a type of magical understanding that comes of that.

Anna: Okay. So I might have something useful to say, which also might shed some light on hip-hop.

Now, I was just trying to solve, to understand, Shakespeare. What I understood was that what we expect in Shakespeare is a certain rhythm, which is iambic pentameter. “duhDA duhDA duhDA duhDA duhDA”. I had this very unusual teacher who suggested that, if that changes, particularly in the second beat—if it goes “duhDA DADA, duhDA duhDa duhDa”—it’s a signal that the character is going through some type of emotional stress. She gave us, as an example, a moment in King Lear when everything is upside down, and he says, “Never, NEVER, never, never, never.” All of it is upside down.

I was so intrigued by that. One class, one day. I was so intrigued by it, that I really spent three years trying to understand everything I could about rhythm and meaning, and rhythm and feeling. So that meant that I did everything from going to churches, to listening to speeches by Fidel Castro and Che Guevara in Spanish—which I did not speak—to going to longshoreman’s meetings. Just wanting to go wherever language was powerful, to see if I could understand something about the sounds—not just the meaning—if the sounds made it powerful.

Now, what’s interesting about what you just said, is that when I got to New York City—I was previously at a conservatory in San Francisco—I arrived here in ‘76, ‘77. Now, what’s happening in New York when I get here? What had already been happening, but what do I catch the tail-end of? The minimalist movement in music, the avant-garde. Which is [for instance] Steve Reich, with this incredible piece, if you haven’t heard it, called, “It’s Gonna Rain,” which to this day I use in my class, which is him taking a Pentecostal preacher and sampling it over and over again, into this thing. If you ever came into my class, all I do is put it on and say, “Okay, move.” They work themselves. They don’t know anything yet, they don’t know me, all they know is that they pay $90,000 a year and they want to get an A.

They work themselves up into this frenzy, it’s like a rain dance, and they collapse on the ground. They start being communal, hugging each other, [even] though they’re still strangers. And all it is, is this preacher, going “It’s gonna rain, knock on the door, etc etc.” John Adams does a similar thing with a Pentecostal preacher. So that type of sampling—Meredith Monk also—this avant-garde, which is almost entirely white people, that affected me, not hip-hop.

But I was interested in all of them—Robert Ashley—because they were deconstructing language. And I was not interested at all in the kind of plays that I had to study when I was learning to be an actress, other than Shakespeare. I was interested in Shakespeare, but I was not interested in the “great gods.” [Like,] Arthur Miller, where everything makes sense and every sentence is perfectly ended. I found that really oppressive, and if I could say, I was the only Black person around, and was getting a lot of rewards by being obedient. [note: this made me laugh pretty hard, but Anna glibly dropped this nugget straight-faced]

But I really found that I wanted to see what else language could do. So I’m learning something talking to you. Nobody has caused me to think about, what, you call it hip-hop, but for me, it was white avant-garde artists.

Leonardo: But that’s such an amazing convergence! The meeting point of the white avant-garde and hip-hop.

Anna: It’s all happening! The hip-hop people maybe need to take a little listen. Even if you think about songs that weren’t even considered the avant-garde, but [appeared] at the end of the revolution in the 60s, they would say, “All we’re saying is give peace a chance.” You just sing it over and over again with this hope, that you’re going to make peace come, it becomes like a rain dance.

Leonardo: Yeah, it’s like a chant. There’s magic in there. There’s something that is returned.

Anna: There’s a lot of magic. I believe words are magical.

Leonardo: As do I!

Anna: I think I read this in a book of Native American poems: “The word, the word above all, is truly magical, not only by its meaning, but by its artful manipulation.” When I try to talk to kids from Abu Dhabi about what I do—sparked by my grandfather’s saying that if you say a word often enough, it becomes you—I didn’t have to get very far into the discussion before someone raised their hand [and said]: “It’s like prayer!”

Leonardo: I remember you quoting him yesterday at the event.

Anna: I always quote my grandfather! 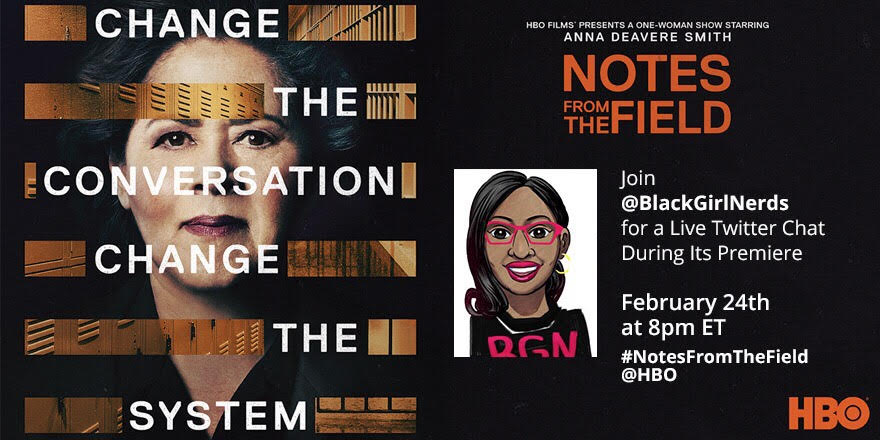 Leonardo: Okay, probably a stupid observation: nobody in Notes From The Field is white? Is that accurate?

Anna: That’s incorrect. But, there are usually more white people in my plays. And there was some white people who were in it who “bit the dust” [so-to-speak]. Two very, very important white people who were in it for a long long time, but were not in this version, or in the New York [-performed] version. But, Amanda Ripley is white. When I’m telling the story of what happens to young Shakara being thrown across the room. Amanda Ripley is a journalist who works for The Atlantic—she’s white.

Leonardo: Okay, apologies. I was wondering about that. I didn’t think that was the case, necessarily, but then I was thinking whether there were any white people in the 250 who might’ve been removed, or didn’t “make the grade?”

Anna: There was one that I had to lose only because we couldn’t get the rights to part of something very important about it. There were many white people in the whole “catalog.”

Leonardo: White people are definitely part of the conversation and message that the film communicates, of course.

Anna: By the way: my audience is almost always, very, white. And as I said last night, in two of the productions, me and Marcus [Shelby, accompanying Anna on upright bass in Notes From The Field] stopped the show in the middle and said, “Okay, you’re the second act.” And they had to go out in groups of 20 and talk with the facilitator—there was a lot of white people in those audiences. That’s who comes to the theater…at least, that type of theater, the theater that I do. 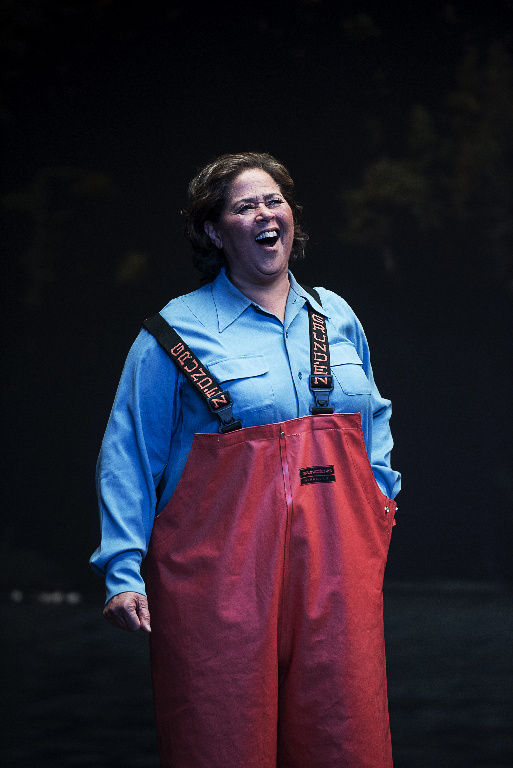 Leonardo: Last question: do you think that we, as Americans, need some kind of grand social and political reset? Do you think such a thing is even possible or viable or wanted?

Anna: Don’t you think we’re in the midst of one right now?

Leonardo: Well that’s what I was kind of wondering. Do you think that?

Anna: Well, it’s not a revolution. But it’s a reset. I just hope that it also has cultural impact, and valued impact. It’s very well for us to focus on Trump, but I wrote a whole play about our presidents, traveled with Clinton and Dole on their campaigns in ‘96, hung out with the press. Did 520 interviews.

Some smart person wrote that we get the president we deserve, some iconic journalist wrote that. And I think that’s right.

We’re also in a values crisis. It’s not just about Washington, it’s about values. And I think we’re in a moral crisis. I think the question is, who’s going to be the leader? We don’t have a moral leader that everybody can respond to. Nobody likes religion.

Like I said last night, I’m all for “radical kindness.” I think it’s the only religion we could sign up for, across all of our tribes.