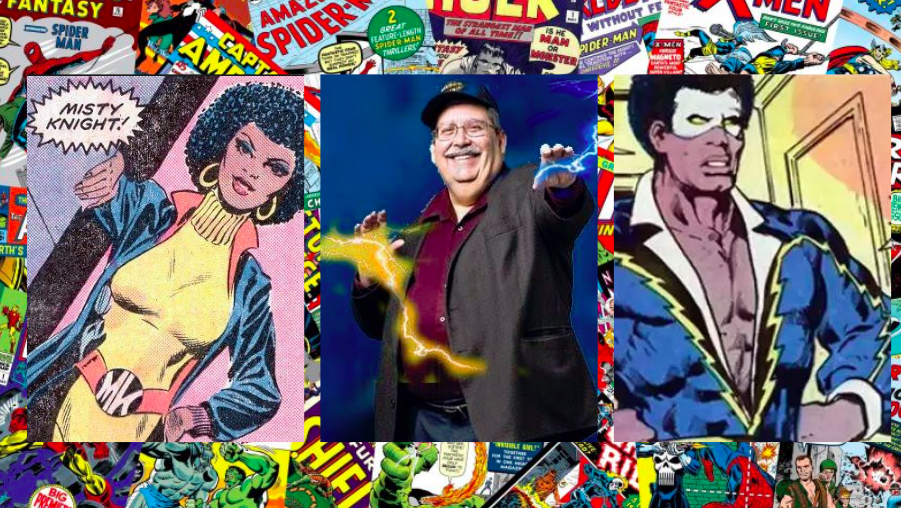 If you don’t know already, Tony Isabella is the creator of two of the most eminent Black characters in comics. Marvel’s Misty Knight, whom most of you know from the Luke Cage and Iron Fist series, and DC’s Black Lightning, who currently has his own live-action TV show of the same name on the CW network.

Eva sat down with the comic book creator to chat about the how these characters developed decades ago are now coming back to life on the small screen.

How did you get started writing comics?

Those are the one where you submit it for a contest?

Tony Isabella: No, no. These were like fanzines done on ditto machines and mimeograph machines, long before the internet. I got to know some of the writers and editors and artists. I was working at the Cleveland Claim Dealer. We went on strike. I was not happy with the paper anyway. I called up Marvel Comics I was friends with Roy Thomas, and they had an entry level position for someone to work with Stan Lee doing magazines for Great Britain.

What was the first title you wrote for?

Tony Isabella: My first published comic was actually in a non-marvel tabloid newspaper called “The Monster Times.” It was a little two-page script.

How did the idea of “Black Lightning” come about?

Tony Isabella: Well my outline with “Black Lightning” was a journey. When I lived in Cleveland it was very segregated. My first Black friends were three comic book fans who came from the east side of Cleveland to the west side of Cleveland to attend the Comic Books club I ran. I thought that it was unfair that my friends didn’t have more characters like them. So I always told myself, if I got into comics I would try to work with characters of color and create characters of color. So at Marvel, I did “Luke Cage.” I worked on “Captain America and Falcon.” I created Misty Knight while I was writing “Iron Fist.” When I got over to DC I had a chance to create a new character that could pretty much be whatever I wanted.

I set out to create a very positive character. He’s a reluctant hero. He’d rather be a teacher but he has these powers and he knows they come with a responsibility to his community. 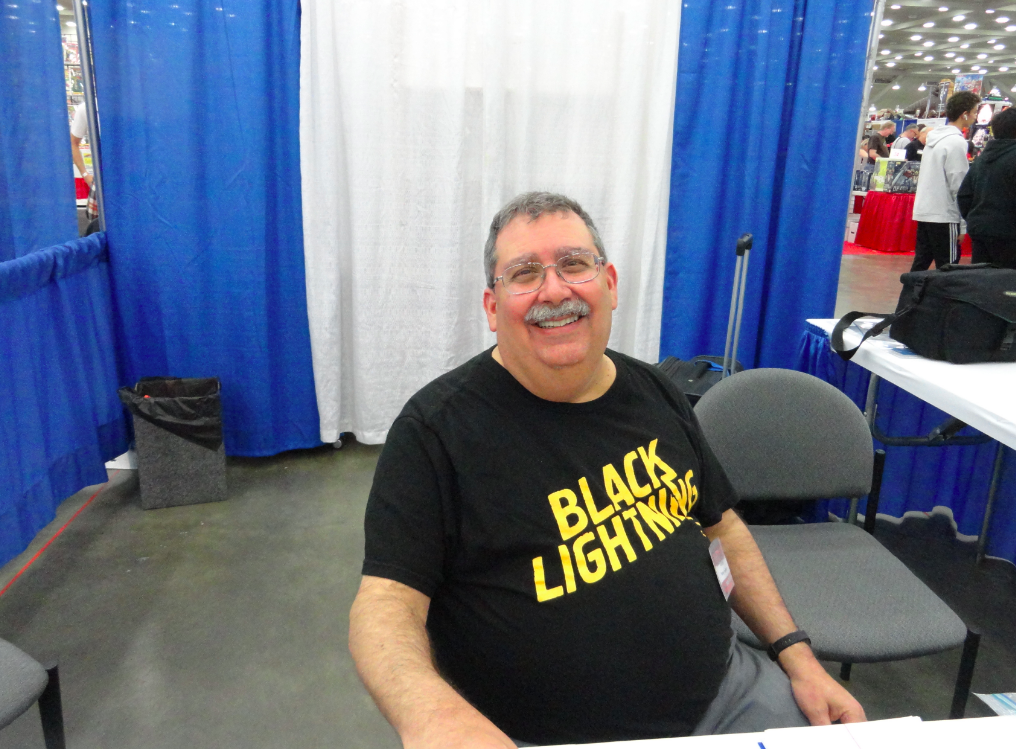 I think that’s what really appeals to people is his dedication to the community and you’ve always had that in the story. I like that it’s coming out well also in the television series as well.

Tony Isabella: I wrote a core values statement at DC’s request before they ever hired anybody to do the show and both my comic book “Black Lightning” And the TV show Black Lightning share these core values. What’s most important to Jefferson is family, students, community and city. Those are shared by both shows. I see a lot of me on the show. They’ve added a lot of cool stuff. I answered a lot of questions for the showrunners when they were hired. I spent a day with the writers. I corresponded with just about the entire cast and then met them all at the premiere. I feel really good about the show. I love it.

Tell us about the origin of Misty Knight.

Tony Isabella: Well I was writing “Iron Fist” and I didn’t know if I was going to write more than three issues, as it turned out that’s all I did. “Iron Fist” had all these second person captions. “You are Iron Fist,” “You’ve just been hit in the face with a fish,” “You are Iron Fish you just did a turkey punch.” I hated those. I hated writing those. I wanted to give “Iron Fist” someone to talk to. Arvell Jones and I and a lot of young Black artists, Ron Wilson, Dee Howard, we were going to all the Black action movies and we saw this really not very good movie called “Black Belt Jones,” that had a female martial artist. Really kick ass. As we came out of the theater I told [Arvell] “I’m going to create a character like that to be in “Iron Fist.”

I based her on Pam Grier but Arvell actually realized that she was Pam Grier. She was supposed to be kind of a snotty big sister to Danny Rand, “Iron Fist.” She would mock him for his naivety but she’d always have his back. I created her to be a sister figure and a partner to Danny. I only wrote her into one issue. Chris Claremont did all the heavy lifting on the character and did a great job with it. She was intended to be Danny’s sidekick.

Did you get any pushback from Marvel about Misty?

Tony Isabella: Never. Never. Never. The Marvel editors and writers of my generation, we were all young. We were mostly progressive liberals, as quite frankly the comics industry has always been progressive. No, none of us at all had any problems with characters of color. If we thought we could’ve gotten away with it we would have had gay characters even back then. No that was never a problem.

Has the portrayal of Misty on the various Netflix shows, altered the way you look at Misty now as a character?

Tony Isabella: I think the TV version is the best version ever. I love Simone Missick. Arvell and I met her at the Luke Cage premiere. There’s a great shot of us on the red carpet with her, which I titled, “Misty has two dads.” Clearly if you’ve ever seen Arvell, he’s a very tall distinguished guy and clearly, I gave birth because I have the hips for it. No, I love the show. I love what they do with Misty. There’s a handful of characters I either created or liked a lot. I would love to write a Misty series again.

Being one of the few Black females in the Marvel universe, Misty has been romantically linked to several characters, who do you think her real love is?

Tony Isabella: That’s hard to say.  I think if I were to suddenly say okay here’s Misty she’s your baby, you control her fate, she wouldn’t be dating superheroes. She’d be dating somebody outside her superhero workplace.

I believe you have a trade paperback about to go out or just hitting the shelves. What is it and why should people pick up a copy?

Tony Isabella: “Black Lightning: Cold Dead Hands” will be out any day now. It’s a collection of the six-issue series I just finished writing. It is a younger “Black Lightning.” I rebooted him. He’s not married yet. It’s very contemporary. It deals with a lot of social issues. It’s set in my hometown of Cleveland. It deals with gun violence. It deals with police malfeasance. It deals with the disconnect between the police and the community. Some people have said it’s an anti-cop book. It’s not. There are good cops like his best friend detective Tommy Colavito. There are bad cops and there are cops in between.

It’s got a lot of really hard stuff in it and DC Comics never flinched. Some of the scenes that are in there, I’m so amazed that I got to do them. I think it’s my best work ever. I’m hoping that a lot of people buy it because the more people buy this trade paperback, the better the chances are of me writing more “Black Lightning” stories.

What’s your next upcoming project? Can you tell us?

Tony Isabella: I’m working on a book called “Black Lightning and My Road To Diversity.” It is a non-fiction book about how I came to work with characters of color. Talking about some of the early African American creators that no one knows about. My history writing “Luke Cage,” and Misty and the whole “Black Lightning” story. Then it will close with my comments with on diversity and everything. My definition of diversity is that if we have readers big or tall, black or white, gay or straight, conservative or liberal, religious or not, they should see themselves in our comics. To me, I’m enjoying comic books more than I ever have in my life and it’s because of the diversity and inclusion. So many great new characters. So many new voices.

“Ms. Marvel,” written by an American Muslim woman, one of favorite comics. If you had told me that I would be saying that even six years ago I don’t think I would have believed you.

What about Thunder? I like where they’re going with her in the series and it seems like a good opportunity to explore Black female homosexuality.

Tony Isabella: We have two Black female gay characters in “Cold Dead Hands.” Tommy Colavito’s partner, Demise Simms and Thunder. Because Jefferson Pierce is not married in my new series I couldn’t use his daughters but he’s got cousins.

Thank you so much for your time.

We love you so much at Black Girl Nerds.

Tony Isabella: I love Black Girl Nerds so much.

Luke Cage season 2 is currently streaming on Netflix and Black Lightning airs Tuesdays at 9pm ET on the CW network.

Simone Missick Discusses The Season Finale of ‘All Rise’