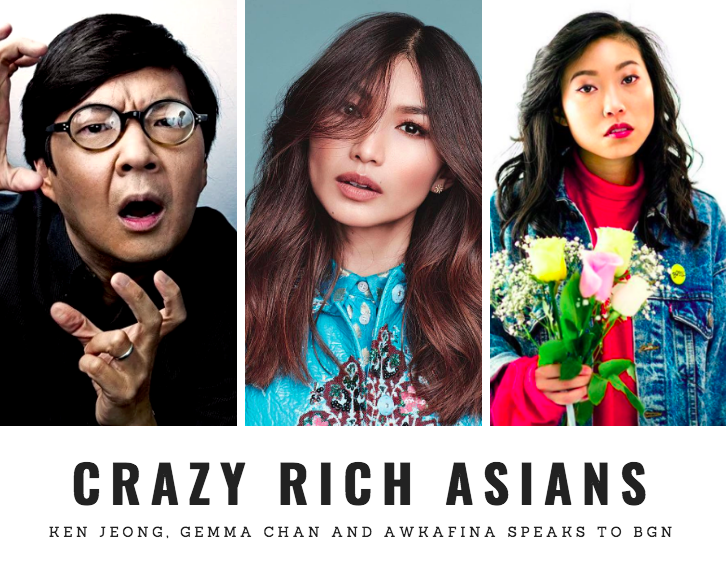 In a few days, one of the most anticipated movies of the summer, Warner Bros’ Crazy Rich Asians, premieres in theaters nationwide. This film could quite possibly be a game-changer based on how successful and well-received its release will be for audiences. While many fans both Asians and non-Asians alike are excited about the impending film—the fact that an all-Asian cast in a large studio picture is an anomaly; illustrates that Hollywood has a lot more work to do. Not since The Joy Luck Club in 1993, have we seen a big budget studio picture with a predominantly Asian cast in non-stereotypical roles.

Crazy Rich Asians is based on the Kevin Kwan novel of the same name set in contemporary day Singapore.  The story follows New Yorker Rachel Chu (Constance Wu) as she accompanies her longtime boyfriend, Nick Young (Henry Golding), to his best friend’s wedding in Singapore.

Rachel is nervous to meet Nick’s family while excited to visit Asia for the first time. However, things get a little complicated when Nick neglects to tell Rachel details about his family’s wealth and social status—as well as being one of the most sought-after bachelors.  Rachel soon becomes the target of scrutiny and vitriol among some envious socialites. And taking the lead amongst them who disapprove of their relationship, is Nick’s own mother Eleanor Sung-Young (Michelle Yeoh).

BGN chatted with some of the cast of the film to discuss not only the concerns about the lack of Asian leads in big studio movies; but also how this is a universal story that anyone can relate to.

Ken Jeong is a comedian we are all familiar with. He’s appeared in such films as The Hangover, Pain and Gain and Pineapple Express. He was the star of his own TV series Dr. Ken and we know him as Dr. Yap on Bob’s Burgers. In the movie, he plays Goh Wye Mun, Peik Lin’s off-the-wall, new-money, father with a U.S.-bred education.

Ken describes Goh Wye Mun as a man with new money as opposed to Nick Young who’s old money. “[The Mun family] are kind of the modern-day dynasty in Singapore, in terms of old, traditional family money. My family is very much, very tacky new money.”

Ken Jeong also states there is a lot of heart and a lot of love with this family. He also shares how his character meets the film’s protagonist.  “Rachel is distressed and she feels alone in Singapore, and she goes to my household to be with her best friend, played by Awkwafina.”

BGN also chatted with rapper/actor Awkwafina who plays Goh Wye Mun’s daughter Peik Lin. She’s Rachel’s best friend from college and acts as a go-between culturally on both East and West. Awkwafina describes her as a character to help explain to the audience “what the hell is going on”. Peik Lin is brashly honest and a loyal friend. Awkwafina shared insights about working on the set with an all-Asian cast and crew.

“I think that as an Asian-American actress in 2018 times are changing drastically, and I think that if I was an Asian-American actress that had been working in the industry for 50 years; and I was on that Crazy Rich Asians set, it would’ve been mind-blowing. You know my last movie was Ocean’s 8, with an all-female cast [and] minorities thrown in there too. And all of the movies that I’ve done have been open and very accepting of the fact, I’ve never played stereotypical characters. In a way, I am very fulfilled. So, I think filming Crazy Rich Asians, it was never spoken about and there was an instant bond that we had as actors. Not only that we were Asian-American actors that probably endured similar struggles coming up, but that also we were brought up in a certain way.”

Awkwafina also told us that while watching dailies of various scenes along with filmmaker Jon M. Chu, she cried she was so overwhelmed with emotion.

“I really didn’t get to see a movie like this ever. So, I can’t understand where the emotion comes in if it’s because I’m an actress or just from someone who’s lived in this country with very little representation. So, it’s a very emotional experience.”

She also adds that Peik Lin is the least Asian character she’s ever played.

“All of the movies that I’ve played I’ve never extenuated playing Asian, so I just find it ironic that in a movie [called] Crazy Rich Asians, Peik Lin is not Asian at all. It just doesn’t define her. So, it’s just ironic. There wasn’t a need to play that up even in a movie with Asians in the title. I’ve been really lucky in this industry to play roles that literally allow myself to be myself.”

The lack of opportunity for Asian-led films that aren’t a racist stereotype is a conversation happening more now than ever.  With social media tags like #WhiteWashedOUT and #StarringJohnCho, the industry is finally paying attention to this marginalized group that rarely see themselves reflected. When I asked if this film will open more doors of opportunity for Asian actors, Ken Jeong says:

“I think that there is a big potential to have the doors open for other talented Asian filmmakers to have their voices heard, and I think that’s why there is so much excitement, not only because it’s a great movie told by a great director, and the books that are written by a great author—Kevin Kwan, which at the end of the day, it starts with that source material. I’m a huge a fan of Kevin Kwan’s books. My wife and I read Crazy Rich Asians years before it was green-lit into a movie. To have this impact, it’s become something that’s bigger than all of us, and I think all of us recognize that. So, as we are kind of on the eve of the film’s wide release, it gets emotional. You realize there’s a ripple effect that’s coming out of it, and it’s exciting.”

Fans are pretty excited about this film and some decided to take it a step further like digital media entrepreneur Bing Chen, an avid supporter of the #GoldOpen movement. He’s on an initiative to buy out theaters to encourage more Asians and Asian-Americans to see this monumental movie.

Director @jonmchu: “Crazy Rich Asians is more than just a movie, it’s a movement.” But EVERY MOVEMENT NEEDS ITS MAFIA. That’s why 100+ of us have bought out theatres to give #CrazyRichAsians a #GoldOpen. Join us and buy your tickets NOW for opening week on @Fandango.com pic.twitter.com/rvYayv1GkV

This is similar to what other fans have done like what Frederick Joseph did for the #BlackPantherChallenge to buy out theaters for kids to see Marvel’s Black Panther or what Taylor Richardson who raised over $20K to allow 1,000 girls to see the film A Wrinkle In Time. Fans have now become activists in their own right and allowing others to gain access to see themselves reflected on the big screen.

Disney’s A Wrinkle In Time is similar to that of Crazy Rich Asians in the fact that it also is a film adapted from a popular best-selling book.

Gemma Chan who plays Astrid Leong also read the book. Book purists may be curious to know if the film will stick closely to the source material.

“There’s definitely been changes in the adaptation, out of necessity because you’re talking about adapting a 400-page book into a film that’s 1 hour and 45 minutes. So there are storylines that have been left out or streamlined,” Gemma says.

Gemma describes her character Astrid as a bit of an enigma.

“I think it’s always important to identify with your character or at least be able to see things from their point of view. It doesn’t mean you always have to play characters that are necessarily just like yourself but I think you have to be able to see it from their point of view. And [with] Astrid, there are definitely some parallels. I certainly identify with the fact that she’s a character that probably finds it difficult to ask for help. I can see that.”

As it was mentioned earlier, we haven’t seen a large studio film with an all-Asian cast since The Joy Luck Club in 1993. However, Ken Jeong is hopeful that because of television—film will eventually catch up and we will see more Asian representation on the big screen.

“I think that right now we’re part of a bigger movement. If you look deeper into the context of this, Fresh Off The Boat has been around for the last four or five years, and that has really pioneered. I think have been witness to the progress that has been made for Asians in film and TV, and right now it’s starting with film, if that makes sense. So, I think there’s been a continuum over the past four years, where even I’ve had my own show, Dr. Ken for two years, because of the success of Fresh Off The Boat. I firsthand know what it means and feels like to be the beneficiary of that, and right now we’re seeing [this] in the film world, except on a bigger, bigger scale.”

Speaking of scale and the word “big”, the bank accounts of many of these characters are in the billions! We’re not talking millions, but BILLIONS!

If you had a billion dollars deposited into your bank account right now, what would you do with it?

“I would try not to buy anything. I think that I’m already happy with what I have, so I’m of the mindset where you want to save it for the family and the world if that makes sense. I think there can be such a thing as too much money,” says Ken.

Ken later changed his mind and says he would purchase Adidas Climacools and eight private jets.

“I would start some kind of foundation for the children for the next generation. I’m very passionate about that. How do you spend that level of money? I think once you’re kind of relatively comfortable that’s what you’d want to do with the excess wealth. You put into medical research or education,” says Gemma.

“Oh man. You know what in a perfect world, I’d probably like invest. I’d probably open up a Roth IRA. But realistically, I’d probably just put it into an account and that accrues interest and let it just sit there for a while and just draw from it to use, you know what I mean? I probably wouldn’t know what to do with it,” says Awkwafina.

Perhaps Crazy Rich Asians will make a billion dollars at the box office? Only time will tell.

This interview has been condensed and edited for clarity.