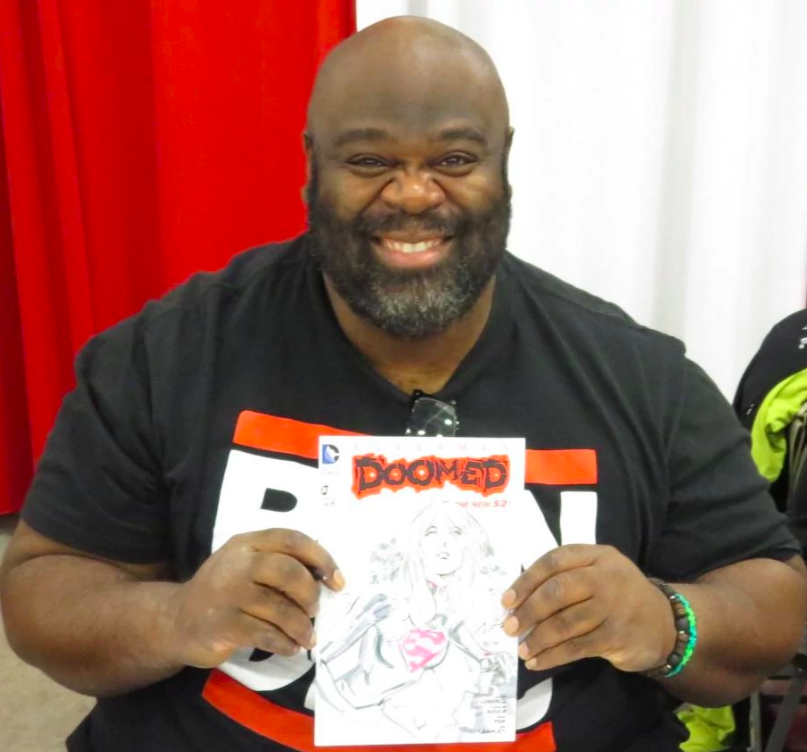 For a long time, my love and appreciation of comic books focused solely on the joyous merger between writer, artist, and inker.  Like many, I often did not pay real attention to their names as it related to the stories I liked.  My focus was on my interest or lack thereof for a specific character or team.  As my comic tastes expanded, I started to realize that with the amount of money I was spending each week buying titles that I didn’t like, an irrelevant one-shot or some 6-issue story arc were stories that resolved itself.

At the time, I was not an avid reader of Superman.  There were four or five titles with the Man of Steel in it.  One book that caught my eye was for me the pure embodiment of the title Superman: Doomed.  I was just coming back to comics, and the prevalence of variant covers was a relatively new thing for me.  The cover really grabbed me — this was the story of one of Superman’s most powerful enemies — Doomsday.  I was curious who did the cover?  Turns out it was Ken Lashley.  In my mind, this was my first introduction to his work. Looking back, I had migrated to a great deal of his work throughout my collecting years, which included cover runs on Batwing, Suicide Six, Uncanny X-Men, X-Men Gold, and Superwoman.  Of course, you can’t talk about Ken Lashley and not mention his run in 2009 on Black Panther with Reginald Hudlin.  My first meeting with him was in 2015 at the New York Comic Con (NYCC), where he signed my copy of Superman: Doomed.  I would see him over the next few years in Baltimore and New York and various conventions.  One of my next meetings, he did a quick sketch for me of Black Panther.  This year, I purchased a couple of pages of original art from another artist who had inked the page, Robert Stull.  He told me that Ken was at the convention and that he would be surprised to see the pages.  He was right and once again at his table I was introduced to the intelligent, talented, and outright comical Ken Lashley.

What is the first comic book you read?

Did it influence your future career choice?

Ken Lashley: I would probably say so. Looking back, it probably wasn’t as cool as I remember it to be, but yeah. I just loved comics in general and I loved the medium. I love this kind of stuff. 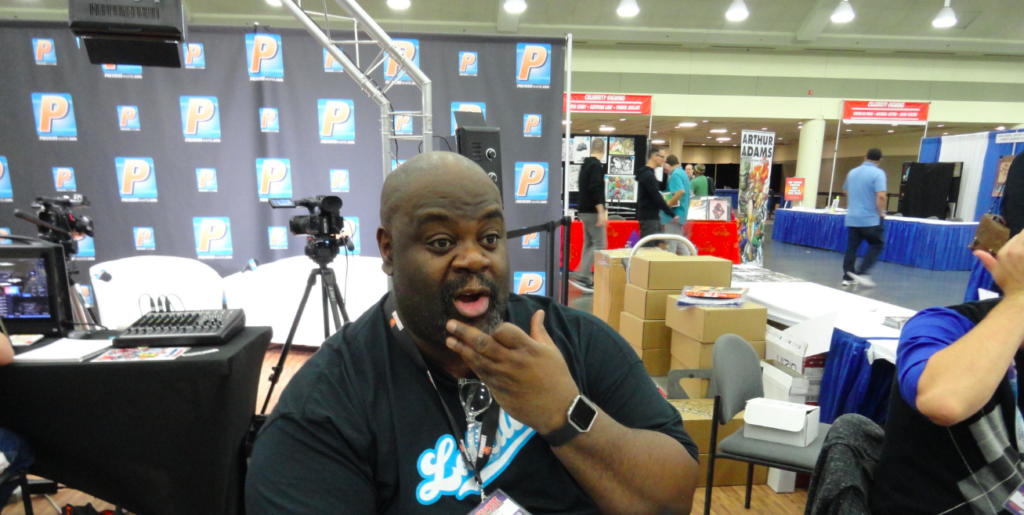 Did being Canadian make it harder for you breaking into comics?

Ken Lashley: I guess so. You know, I didn’t really know the difference. Probably there was some kind of barrier but I don’t think it’s really that much of a barrier. I think the work really stands for itself. You can either do it or you can’t. I don’t think they really care if you’re green or blue or from Canada or whatever. They don’t care. It really isn’t that big of a deal I don’t think anymore.

How long have you been drawing comics professionally?

Ken Lashley: I’ve been drawing comics since 1993. It’s when I got my first job in comics and I’ve been fortunate to be working ever since. 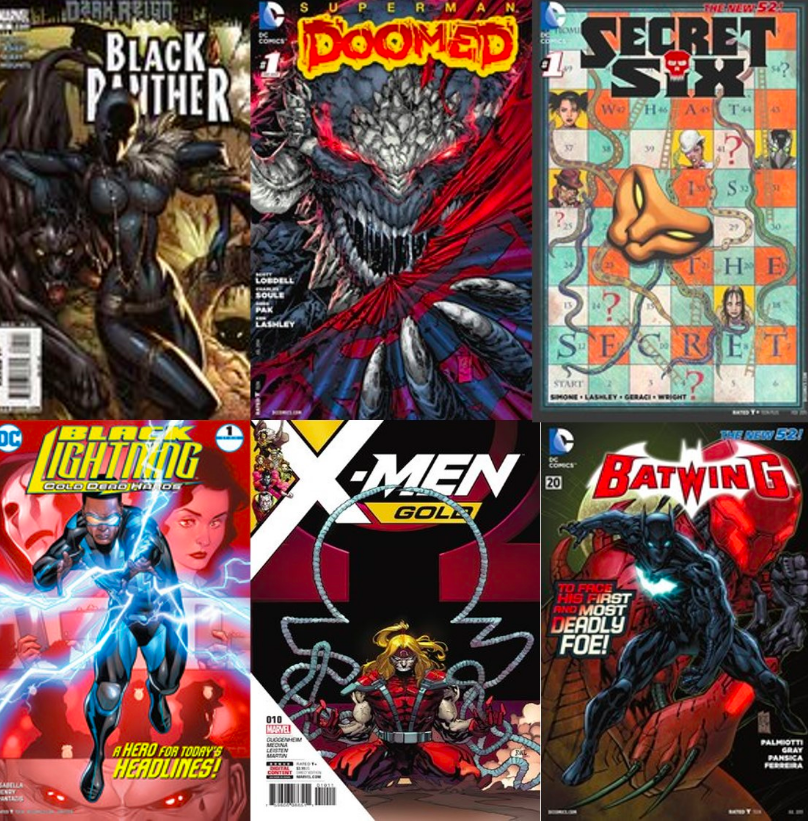 What has been your best job or title to work on so far?

Ken Lashley: For me, personally, I really like the X-Men stuff I worked on. I mean, drawing X-Men is really wicked, but also drawing Superman. I was never a big Superman fan growing up. It just wasn’t my thing, but getting a chance to draw it was really interesting, because you don’t think about certain titles. I say, “I’m drawing Superman.” She’s like, “Oh of course. I know who Superman is.” And it changes how you think of things. At first, I didn’t think about it — but it changed how I worked.

How does the portrayal of some of the characters that you draw, changed or altered since they’ve appeared in cartoons or the movies?

Ken Lashley: Oh my goodness. That’s a loaded question. I mean, it’s changed a lot. It’s just changed by the world we live in. The world has changed so they change, right. I don’t know. I think a lot of people get upset about the openness of what’s going on in the world right now. People talking about race and religion and sexual orientation and all those things and those are things that were very rarely spoken about in comic books, but I think we live in a world now where it’s…I love it.  I love how people can be honest and be themselves. And I think that’s amazing. We see some of these commercials that are on TV that are same-sex marriages, biracial couples. I mean, that’s the world we live in. They were always part of who we are but they never showcased on television or in our entertainment, not as much anyway, and I’m glad we live in a world where I can see a GM commercial for a gay couple and they’re buying their car and they have a biracial kid in the back, and I love it. Those are our neighbors. Those are real people, right?  So I think that’s cool. And I think entertainment should definitely reflect the times that it was created.

What is the book or title that got away from you or you wish you had drawn?

Ken Lashley: Oh geesh. This is like the sad wish list. There’s lots. There are lots of things that you get offered an opportunity to draw and you don’t end up doing it. I don’t feel sad about it. I just feel like someday I’ll do it or whatever but I don’t feel bad about it because I’ve had a pretty interesting career. I’ve done some really cool stuff. I never feel like that got away. I just feel like not yet, not yet.

Ken Lashley: I meet a lot of really cool people. I’ve met some amazing people over the years. Just putting a face to a lot of the people who contact you. People who get artwork from inkers who come up and see you and ask you for stuff and sign it and stuff. Those people are sometimes very nice …But I really enjoy meeting the fans, to be honest with you. I really enjoy it.  I’m still a fan of this stuff. I work professionally, yeah, sure, and I do some stuff but I’m still a fan walking around and I see somebody cool and I’m like “oh my God, here’s what’s his name”?

So what’s the most embarrassing fanboy meeting that you’ve had?

Ken Lashley: Are you kidding me? Are you kidding me? I’ve done it. I’ve had a ton. I can’t even tell you one or two. I’ve got lots. And when I met Erin Gray,  as a Buck Rodgers fan…I was like oh my goodness. You know what I mean? Such a crush on her. That was my first real crush when I was a kid.

We don’t have to worry about you having a Batman Damned moment?

Ken Lashley: That’s not going to happen to me.

Well, we appreciate that. All right, thank you

As an artist, cover artist, and inker for both major publishers, you can find listings of Lashley’s work on either publishers’ web/wiki pages.  Some of his most recent work can be found on issues of X-Men Gold.