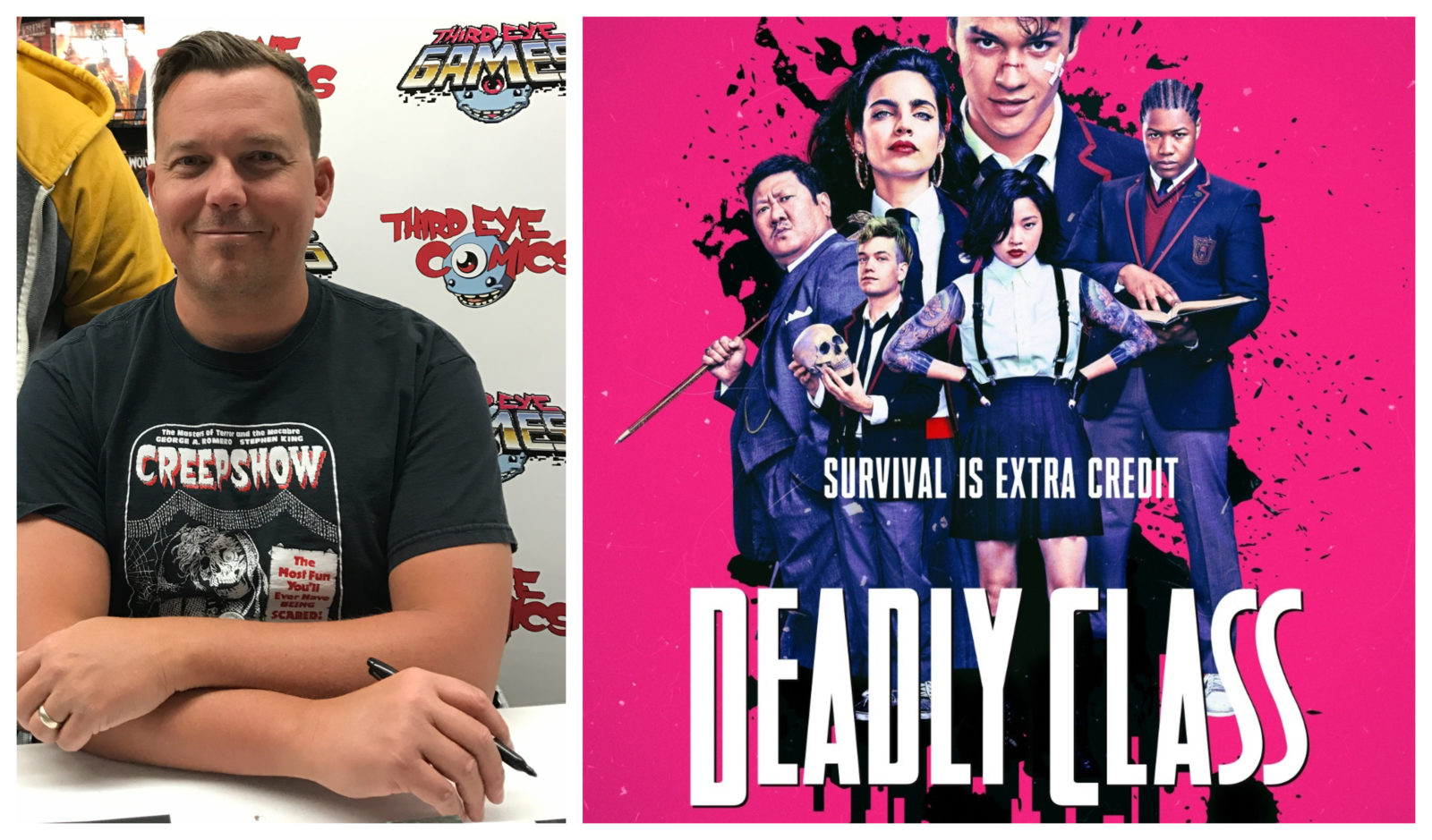 On set in Vancouver, BGN got to sit down with Rick Remender, the creator of SYFY’s new show Deadly Class. The show, based on the graphic novel, follows homeless teen Marcus Lopez as he is recruited into a high school for assassins. Set in the ‘80s, it’s a coming-of-age story with attitude. Creator and executive producer, Rick Remender was more than willing to tease some character moments and explain how it all came to be.

We ventured back to 1997, the origin of it all, when Rick was an animator on the film Anastasia.

Rick, like any writer, kept tons and tons of journals. “I wrote ‘Deadly Class’ down in the journal, and then forgot about it,” he said. “Years later, I was trying to develop things to reignite my desire to wake up in the morning. I was working on a project called Reagan Youth about me and all of my friends in the 80s and the shenanigans we got into. It was just sort of for me.”

Working on his own project, Rick didn’t take into consideration a potential audience. During the development process, he thought of his own experiences. “I had compiled weeks and weeks of notes and landed on this idea of trying to take the authentic look at the teenage years, and not polish it with the veneer of wanting to make it prettier, or to try to let the adult version of me put it through that prism. As I was digging through that, I landed on this page where I had written down ‘Deadly Class’,” he said.

Rick continued to explain what propelled him forward with the project. “So, I took that title and I said, ‘well, maybe there’s something there.’ I started to explore the notion that there was something interesting in a high school for assassins, because it seemed like a really nice elevated metaphor for how important and awful all of those years can seem, or at least they did for me.”

One of the things that stands out with this version of a high school show, is the use of all sorts of ancient weapons with the main exclusion being guns. “When I first cooked this up six or seven years ago, the amount of school shootings, whatever is going on in our society, whatever this fucking meltdown is, makes it abundantly clear to me, as we’re developing this, that I don’t want to see a gun in a school. Fortunately that really works in helping to heighten the reality, because it becomes something where the metaphors for the violence in these things are heightened. And that they’re using maces, and ninja swords, and katanas, and things like this, which allows you then to immerse in it, as it’s a separate reality from our own.”

On that note, reality is a different world than what is written in Deadly Class. It’s clear that other updates and changes were made for the TV show because of the world we live in today. “Have racist gone away?” he asked. Of course, that is a resounding no. “What’s changed,” Rick continues, “is that we’re all very frightened to talk about it. As far as I’m concerned, I grew up in a place where I was surrounded by racists. My parents moved me when I was a dirty punk-rock grommet living in downtown Phoenix. My parents moved me into a town in the middle of the desert, which was literally like the 1950s. It was crazy!” he exclaimed. “A lot of the cast, a lot of the people in this story, are built on people that I knew there.”

Racism is big part of the world today. It is interesting to see how a show set in the ‘80s will tackle such relevant themes. “I think the responsibility you have is to hear that sort of stupid ideology, and then to put a spotlight on it and melt it away,” Rick adds. “The character of Brandy Lynn is based on people that I was around during those years that were really ugly and just sort of backwards, just sort of cooked in an ideology where their world view became xenophobic, because they lived in this nothing.

I was interested to know where the line between reality and cultural stereotypes lies. Rick jumps in, “All I can do is build characters based on people that I knew and try to put into them what was honest and real about who they were in the era in which we were living as teenagers.”

One of the characters in Deadly Class is a young Black man named Willie Lewis. He’s in a gang led by his mother. There’s this stereotype of Black males in gangs, being good at nothing but sports like football and basketball, while being placed at the bottom of society’s totem pole. “Willie is the personification of the mask that people wear,” said Rick. “Willie is based on an actual human being who was in that situation. He was a good kid who just liked Public Enemy and reading Spider-Man comic books.”

Willie is not the only character who encompasses the stereotypes of their race. “[Willie’s] circumstances were very much, very similar to what’s in the book, with some shading issues. And so, what he had to do was present something that he wasn’t. Frankly, I think that’s what they’re all doing in different ways. The more I dig into that, I think that’s sort of what all young adults are doing. They’re figuring out who they are, wearing a mask to protect themselves from the outside world, and to try to find their tribe, ultimately.”

Rick continues, “It’s a dicey topic. You’re also dealing with it in a very different era. I think that you have to look at it through the prism of the school, but I think that ultimately, what you get out the other side if it’s done correctly, none of the kids are who you imagine they are. Any sort of stereotype you apply to any of the kids, I hope, I really hope by the end of the first season, or if you’re reading the comic book, you realize the idea there is that I strip the layers away, layer by layer, and show that that’s not who they are, actually.