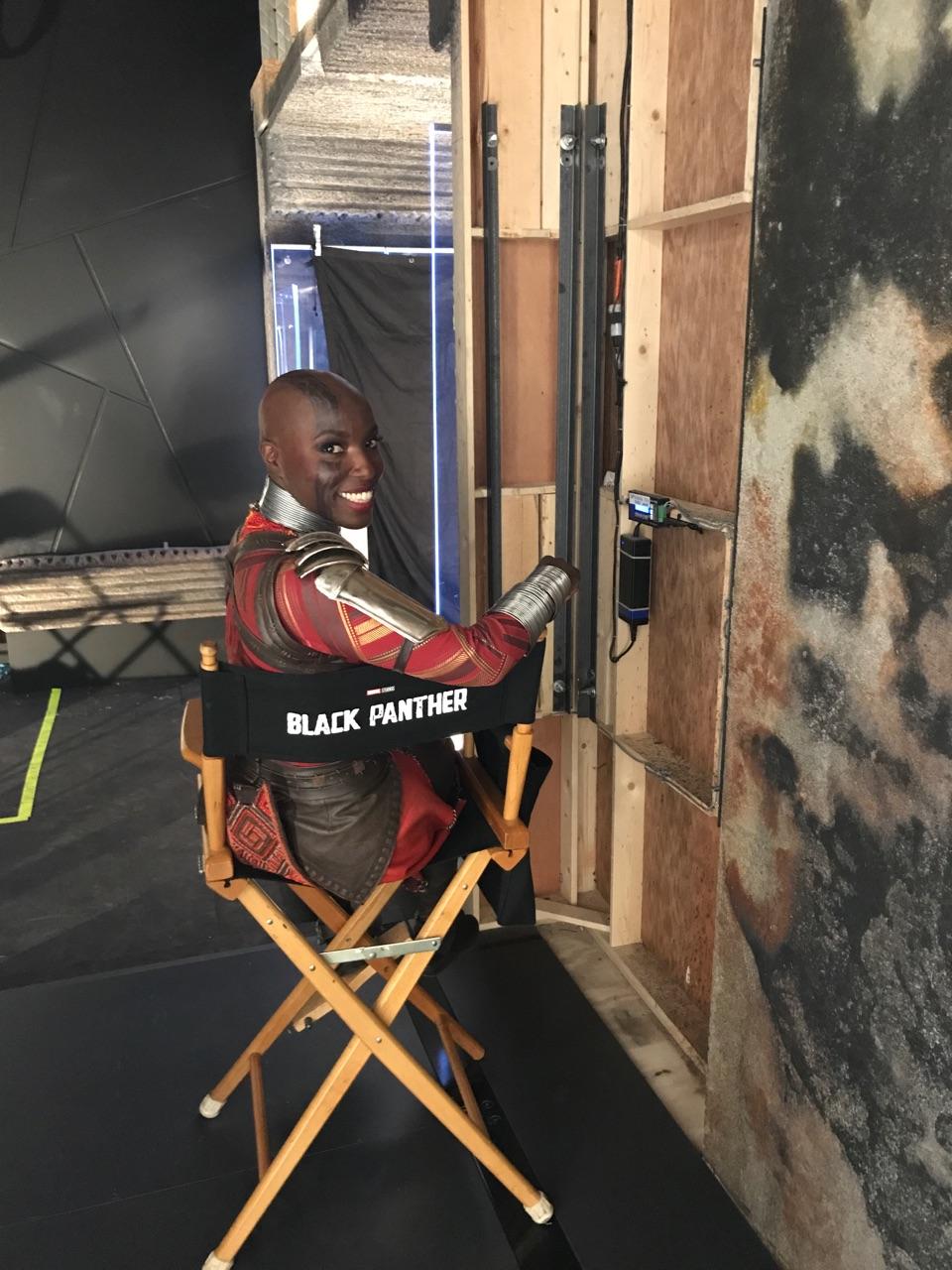 2016 saw Janeshia Adam-Ginsyard cast as one of the Adored Ones, a/k/a the Dora Milaje, as well as Danai Gurira‘s stunt double in Marvel’s Black Panther. More recently, Janeshia received a lot of social media attention when she attended the Hollywood premiere of Black Panther in an outfit designed and made by Tamara Cobus with accessories by Tonymech Acosta, both part of the film’s costume team.

Before becoming a professional stunt woman in 2010, Janeshia was an award-winning athlete in college. She even had the honor of being the brakewoman of the first ever all-Black female American National bobsled team from 2006 to 2007. Since transitioning to stunts she’s doubled for actresses like Angela Basset and Aisha Hinds on American Horror Story, True Blood, and now Fox’s hit drama 9-1-1, not to mention her featured role in the recent Lexus Super Bowl commercial. With the theatrical release of Black Panther approaching, I was fortunate to have the opportunity to speak with Janeshia about her role as a member of the Dora Milaje and her Hollywood stuntwork.

Carolyn Hinds: Hi Janeshia! Thank you so much for talking with me, and I’m very happy to have the opportunity to speak with you. I have to admit I’m very geeked out to be talking with a member of the Dora Milaje herself. To start, what can you tell me about the character you played, such as: what is her name, and is there a rank that she has within the Dora Milaje?

Janeshia Adams-Ginyard: So the Dora Milaje are the all female body guards and special forces to the Black Panther, and there’s eight main Doras: our general is Okoye, played by Danai Gurira. I’m one of the eight main Doras, and we are identified through our facial tattoos. I have a facial tattoo, and my tattoo is over the right side of my face, over my eye down to my cheek and a little bit over the top of my head. Not everybody has a facial tattoo, but I have one, and I think maybe three or four of the others do too.

Carolyn: I find it interesting that you didn’t have names, but I guess, in a way, it makes the unit more cohesive, because you are one.

Janeshia: Right, exactly. If you could think of an army or even marching bands, you know in how they move in cadence and in unison together, we’re unified. We take our orders from our leader, she gives us our command, and we all respond at the same time, you know what I mean? She touches her spear down on the ground and whatever our command is we immediately move together.

Carolyn: Can you tell me what the training was like for Black Panther?

Janeshia: Our fight team and stunt teams and fight choreographers did a great job. The fight coordinator did an amazing job with the choreography and all the fight scenes that you see throughout the movie, not just with the Doras, but with the other characters. As far as the Doras and our training, we all came from different athletic backgrounds, you know. Stunts, clearly, but some of us were into Taekwondo and all these different things.

What we didn’t have was training in bo staff, so our training consisted of eight hours a day training in bo staff, because our weapons—for the Dora Milaje we use spears to fight, and when you see even in the trailer how those spears are twirling, they have to be precise when we’re attacking our enemies. That training was very important, because it helped us transition smoothly to film once we got on camera and had to do take after take after take.

So we had to get used to that because it’s our tool. We trained with our right hand and our non-dominant left hand, and we’re twirling it forwards and backwards; we learned different tricks. We had really intense training but I loved it, I loved it. It was great to pick up that skill, you start developing muscles that you didn’t know you had in your shoulders [laughs], and building up wrist strength. Yeah, it was cool!

Carolyn: Regarding stuntwork: once you’re aware of who you’re going to be doubling for, do you study their movements ahead of time by watching videos, or only during rehearsals on set? For example, on 9-1-1 you double for both Aisha Hinds and Angela Basset—how do work through stunting for two different individuals?

Janeshia: You know that is a really good question, for someone who’s outside of the stunt department. So, for Black Panther, I was not told that I was going to be doubling the Okoye character before I got there, I just knew that I was going to be one of the Dora Milaje and one of the main girls. However, I think the reason they had some of us come early was so that they could see who they would use as doubles, and they kind of wanted to give us extra training in advance.

So when I was told I was going to be doubling Danai, I thought, “This is great, this is what I’ve been praying for”, because my faith is a very big thing in my life, and everything kind of worked and I [made] a really good double for her. I had been there three weeks in advance and we had all been training together and, in training, you can kind of see how a person moves and what works for them and what doesn’t work for them, so it all worked out.

As for the other characters that I double for on TV, its different, because you get booked for a day here, a day there, two days maybe three, max, so you don’t have that time to actually build a relationship with them because it’s moving much faster, whereas with the movie I was there for 18-20 weeks. That’s a long time to learn a person—you get to see them in action, you’re on set with them for hours and hours.

So with Aisha and Angela and other women that I’ve doubled for TV, its just kind of been like a fast thing, where you just have to learn what you have to do for that particular scene, and you just have to make it work. You still are paying attention and watching them to see what hand they use, what foot they lead with, because you still have to match them. At the end of the day you need to look like them in all of their actions and all of their movements.

Carolyn: Recently, one of the ladies of BGN, Kayla Sutton, created the #WhatBlackPantherMeansTo Me hashtag, and people from all over responded. So, I have to ask, what does Black Panther mean to you?

Janeshia: What Black Panther means to me is that there are some African-American young girls and young boys who look like me, and can see people who speak and look like them on the screen as a superhero. What Black Panther means to me is that it also showcasing that women of all shapes and sizes can embrace their beauty whether they are dark skinned, light skinned, or have no hair, because as African-American women we are so attached to our hair. But Black Panther has shown that you don’t need your hair, it does not define your beauty.

Carolyn: I’m so happy your career is progressing and that you’re getting the opportunity to work with people like Danai and Ryan Coogler.

Janeshia: Thank you, I always try to make sure, if anything, that I can inspire somebody not to give up, because you never know whats going on in a person’s head, [with] their self-esteem, what somebody has told them. Sometimes it’s the closest people to you who tell you some off-the-wall crazy crap that almost makes you want to take a detour and a quick left off the path to success, your dreams and aspirations. I want to make sure that I am a walking inspiration, a walking testimony to somebody to be like, “No, I can’t stop, I gotta keep going, because if I stop, I do know that tomorrow won’t be better.”

I was doing stunts since 2010. I did Black Panther in 2016. That’s six years. Now, in those six years, I was working on TV and doing commercials here and there, but it has always been a dream to work on a Marvel film. I would see friends of mine, then they were gone shooting six and seven months, working on Iron Man, working on all of these movies. I always wanted to double and [act] for a significant amount of time, it was on my vision board…nobody knows that. So I think it’s really important for people to know to keep going. I don’t care who the person is, if they say some negative stuff to you, get rid of them, disengage and don’t entertain that.

The fact that I was able to be in Avengers: Infinity War, and then be doubling and get to do some action—cause I love to do hard-hitting stuff. I love to do the ground-and-pound—that’s what I do—so I like that and it’s just been a blessing, and I hope it encourages somebody to keep going.

Janeshia reprises her role as Danai’s stunt double in the upcoming Avengers: Infinity War, which releases into theaters May 4th, 2018, and will also be doubling for Aisha Hinds in next year in Godzilla: King of Monsters.