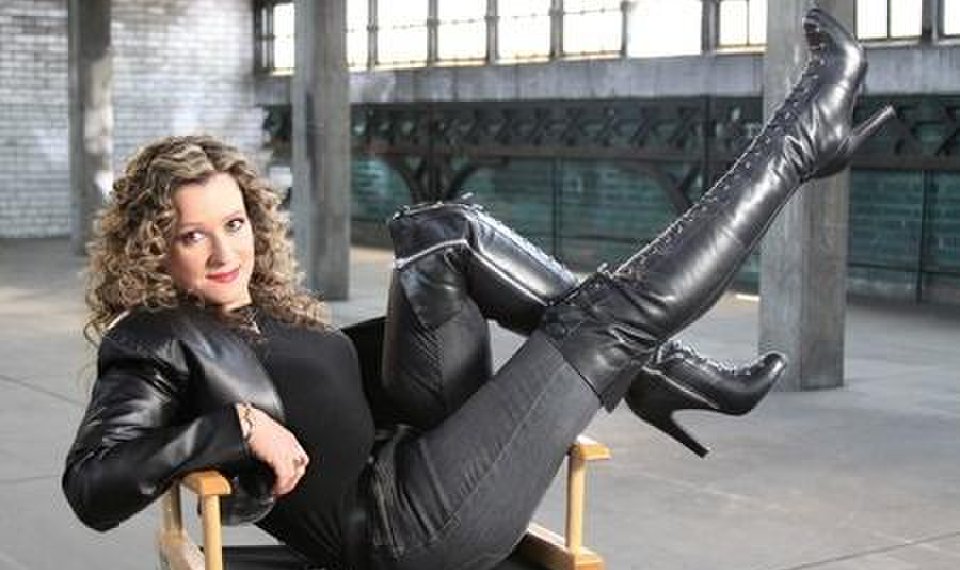 On August 7, Laurell K. Hamilton released the 26th installment to her best-selling romantic fantasy series, Serpentine, to great fanfare and a top spot on the book sales charts. It’s the latest on her character Anita Blake–a necromancer, a vampire hunter, and a federal agent tasked with regulating the country’s “monsters”.

I got to ask Hamilton about her writing, her background and how it all comes together to make her famous stories about faerie queens, vampire hunters, and more.

Jonita Davis: The intimate scenes in the Meredith Gentry (the main character in Hamilton’s faerie series) and Anita Blake books are incredibly vivid. 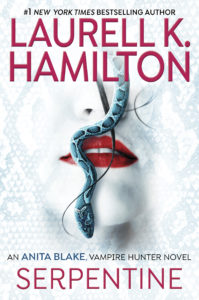 They might even be vivid enough to trigger aspects of a reader’s sexuality that they didn’t realize were there. Is this a result you take into consideration when you’re writing?

When I first started writing the Anita Blake and Meredith Gentry novels, it never occurred to me that my readers might be so deeply touched by what I wrote. I was just trying to write the best book I could, scene by scene. I know now that the sex in my books have touched people deeply, even profoundly, because they have told me so. But before readers told me this was happening, I had no idea that I was doing more than creating a good story.

Jonita: When you’re writing sensuous material, do you ever intend to have an effect on the sexual norms of your readers?

Laurell: Absolutely not! In fact, when I had to finally write that first full-blown sex scene on paper, I found myself very uncomfortable with it. My original idea was to make every kiss and caress so sensual, so amazing, that I wouldn’t need to go that extra mile. 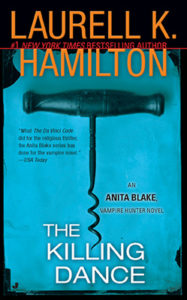 It worked for five books. And then book six, The Killing Dance, came and I’d written myself into a corner. If just a kiss was that amazing in my books, then the rest had to be even more amazing. I wasn’t sure how to do that on paper, but more than that, it made me very uncomfortable at not being able to do that 1950s pan to the sky [referring to the way older movies turned the cameras upward to the sky when a couple was going to have sex].

I did not want to keep my first person narrative camera on the complete act. I’d written about violent crime scenes and fight scenes and never hesitated. Violence hadn’t made me flinch, but sex between two people that loved each other–that made me squeamish. I thought, what is wrong with me? Why does tender, loving sex make me flinch and brutal crime scenes didn’t?

I was happily married and had a child by that time. I knew a lot more about loving sex than violent murder, but it was still the sex that made me uncomfortable. Once I realized just how uncomfortable it made me I determined to write the best sex scene I could and to work through my discomfort. I’m not sure I’d ever rewritten a scene as often as that first intimate scene, but in the end, I was happy with it and so were my characters, because after all, it was their sex scene, not mine really.  I don’t write to push other people’s boundaries, I write to push mine.

[Hamilton later wrote to me to add the following statement to this answer.] 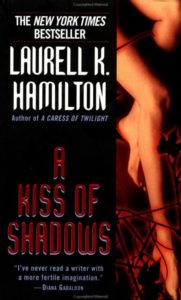 It wasn’t The Killing Dance that opened the floodgates. I think it was a combination of the first Merry book, A Kiss of Shadows, and the 10th Anita novel, Narcissus in a Chains. My plan was to have a character that didn’t argue with me at every turn like Anita. Merry was also more comfortable with sensuality and sexuality than Anita.
I’d planned to put all of the majority of the sexual content in the Merry books, so Anita and I could stop debating the issue. So, I wrote A Kiss Of Shadows then I wrote Narcissus in Chains. That’s when the floodgates seemed to open. It’s as if giving up fighting Anita about sexuality and just writing Merry freed my muse and me. The rest, as they say, is history.

Jonita: When I started reading your books in my mid-20s, I was in therapy dealing with PTSD from sexual assault. I found the descriptions in your sensual scenes incredibly eye-opening, and they helped me become more sexually untethered and open with my husband at the time. Did you think your books could have such a therapeutic effect on a person?

Laurell: My empathies for your trauma, but congratulations on seeking help and taking control of your life through therapy. I am a huge believer in good therapy and the skills you learn there, regardless of the reason for our trauma. I entered therapy in my twenties and have been going off and on since then. All of us have our ghosts and demons. I am so glad that my writing could be a part of your therapy because I believe whatever helps us heal is part of our therapy not just the hour we spend with our therapist.

I had no idea when I was first writing my two series that they would be able to help so many people, but you are not the first [person] to say that the sensuality and positivity about sex in my books have helped them. It is an unforeseen blessing that my journey in exploring my own issues on paper has helped others on their own inner journey.

I understand coming from a background where sex was treated as a negative. I was raised 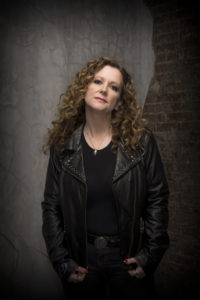 by my grandmother, and her attitude towards sex and men [were] extremely negative. I got almost no information about sex and so began to research it for myself by going to the library. This was before the internet, so [the] library was the only option I knew. This was the beginning of me learning how to research topics from nonfiction sources, accurate sources, or as accurate as I could find.

My librarians were great about it and didn’t censor what I found, because I wasn’t looking for “smut,” I was looking for real answers. By the end of high school, I had a couple of girls who had already had sex come to me with questions, because I had better information than they did, though I hadn’t had sex yet. I’d had to research other things over the years that my grandmother told me that turned out not to be true from the Copernican theory of the universe to why Helen Keller went blind. So I knew she wasn’t always accurate before I started trying to find my own book answers about sex.

I think knowing she was inaccurate about other things helped me not incorporate her unhappy view of men and sex. If I hadn’t been able to work through the early messages and experiences in my life, I don’t know if I would have survived to be thirty, let alone been the writer and person that I am today.

Jonita: How and/or where do you manage to paint such vivid scenery that fully engages readers? Yes, this is the obligatory “what is your secret” question. I have to ask.

Laurell: I touched on it earlier with the sensory detail. I try to appeal to a minimum of two senses per scene, and I usually try for three or more. In real life, you can touch someone’s skin, or grip a gun, but on paper, all I have is words that seem very flat and visual only. I feel you must engage your readers’ other senses to overcome that. Also, you must have the reader emotionally invested as soon as possible. If the reader doesn’t care about the characters then no amount of pretty writing will carry the book. 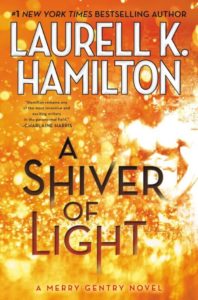 Jonita: What do you think of the idea of adult women having to learn about sexuality and the female body through your books?

Laurell: I was shocked the first few times that women told me how eye-opening my books were to them. I found it especially poignant how many women didn’t understand that sex could be enjoyable for them before they read my books. I’ve even had some women be angry with me, and tell me that sex isn’t like that, that it doesn’t feel like that ever and I’m just making it all up. So far, each woman that’s been that upset has had friends with them to reassure them that, no sex can be that good. All the women that have gotten angry have been wearing wedding rings, which makes it even sadder.

I believe that part of my grandmother’s hatred of men and disgust with sex was because she never experienced pleasure from it. She had five children in primitive conditions with no pain meds, and the sex wasn’t enjoyable; no wonder she hated sex and men. Sex is one of the blessings of being a woman, and to think that there are still women today that are having the same joyless experience that my grandmother had just makes me sad.

By the way its always been younger women who have gotten angry about sex not being like I write it, never older ones. Women in their thirties [who] don’t believe sex can ever be good. I’m also hearing from women in their twenties that aren’t enjoying sex. I thought the “sexual revolution” of decades past was supposed to help us heal ourselves, but apparently, the sexual issues haven’t gone away, at all. The reasons for women having the issues may have changed, but the struggle to have a loving relationship with yourself and your body continues.

Jonita: Would you call yourself an expert on sex? A guru maybe? Do you think your readers get more out of your books than just a good read?

Laurell: Am I [an] expert on sex? A guru to me means a teacher and I don’t knowingly 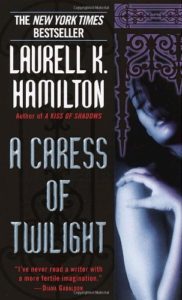 teach about sex. In exploring my and my character’s issues on paper, I seem to have helped people, which is wonderful, but I certainly never thought it made me an expert on sexuality. I don’t have a degree in sexual psychology or sexual physiology. I am not a trained or certified sexual therapist.

So, am I a sex expert?  No, I don’t think so.  I am an expert on how my own body reacts to sex and what I enjoy, I try to continually improve my skills for my wonderful committed partners, including my husband. I make sex a priority, because great sex is rarely accidental, and great sex in a long-term relationship must always be purposeful. I ask for what I want in my life and that includes sex.

Serpentine is on shelves now and available through your favorite online retailer. You can also find copies in the brick and mortar stores that sell new releases.