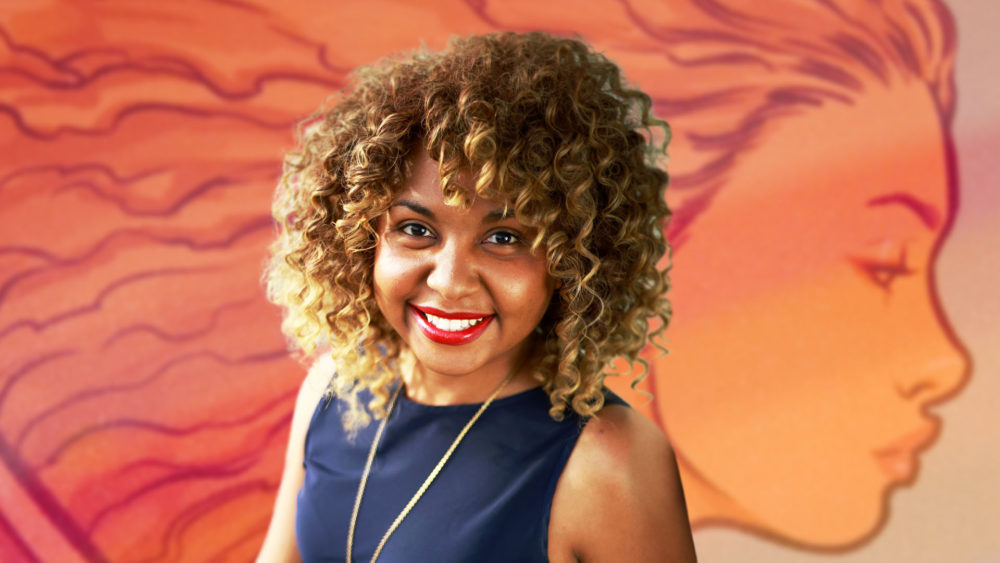 I met Markeia McCarty on the junket for the Jurassic World: Fallen Kingdom film. We geeked out over getting to play with the newest toys released from the movie and a new gaming app. I immediately knew that I had found a kindred spirit or a “kindred nerd”.

Since then, Markeia has been letting her little inner Black geek shine as a host on a handful of projects, as a voiceover artist, and as a film critic. She even occupies the commentator seat on DC Daily the talk show on the DC Universe platform. I caught up with her to chat about her newest show Ask Your Black Geek Friend and about her rising star in the blerd community.

So, tell us a little about the show, Ask Your Black Geek Friend.

Well, on Ask Your Black Geek Friend, we get really real about geek issues, but then also on sensitive race issues that come up in the geek world. And I’m not talking just comic books, we’re talking movies, we’re talking other geek spheres. It could be like fabricators, makeup artists. And we’ve had cosplayers. We’ve had voice-over actresses on. We had a Black Panther — as in the movie — special where we celebrated all things, Black Panther.

Yeah, it’s a show that has the time for those questions. 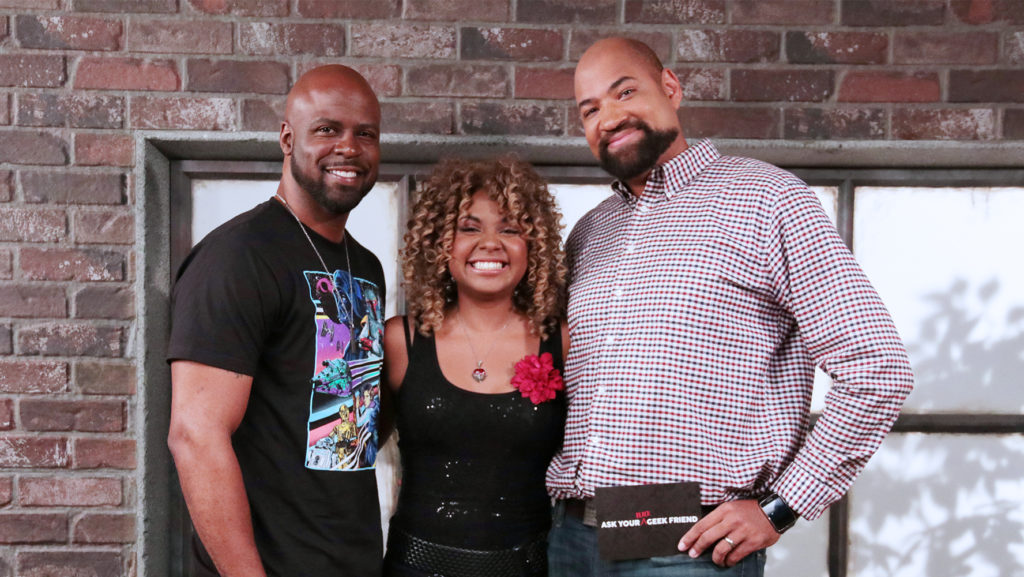 Our shows are live. We are very real with what we do.

Okay, well I do have a lot of them. I love Sailor Moon. I’m a huge fan. I kind of consider myself a Sailor Mars, or Sailor Mercury hybrid.

The reason why I got into horror in general is it was a way to connect with my dad. So, like around seven years of age, I’m watching Nightmare on Elm Street, and Michael Myers and stuff with my dad. It’s something that’s kind of progressed through my life. If there was any kind of new horror that I just love I’m like, “Dad, we’re watching this.”

Oh, yeah. My mom can’t even stand suspenseful music, so it was me and Dad type of thing. So, I have horror. And then, Sailor Moon was just all me. Nobody got why I was into that one.

Yeah, I was going to ask about that one because I think I remember that you were a Whovian like me. And I did meet you, we did meet, on a film junket. So, you are a film critic as well, right?

There you go. Another hat.

Yeah. Everything that I do is [something] that I am passionate about. And with The Nerdist, I’ve really had the opportunity to explore all these different facets of my obsessions. One of them is definitely going to films and critiquing films.

Since I was a military brat, a large portion of my childhood was spent not having access to things like cable, or popular American television, or popular American comic books at the time. But, what we did have were movies and VHS. So, we were that family that went to the movies, that got all of the tapes and CDs for everything. And so, movies became a huge part of my life.

I believe the very first thing I did with The Nerdist was — it might have been the Black Panther press junket for this year. But before that, any opportunity that I had to be able to have my voice, my opinion for movies or films, I grasped that opportunity. But, yeah, it’s because of me sticking with that, and saying like, “No, my voice is important, and my point of view is important. And no matter what I’m going to put that out there.”

This year alone I’ve been able to interview Angela Bassett, Viola Davis — you were right there with me ؅— and Oprah Winfrey. This year alone.

I interviewed Oprah. She touched me. Oprah touched me, and we took a picture. Oh, my god. 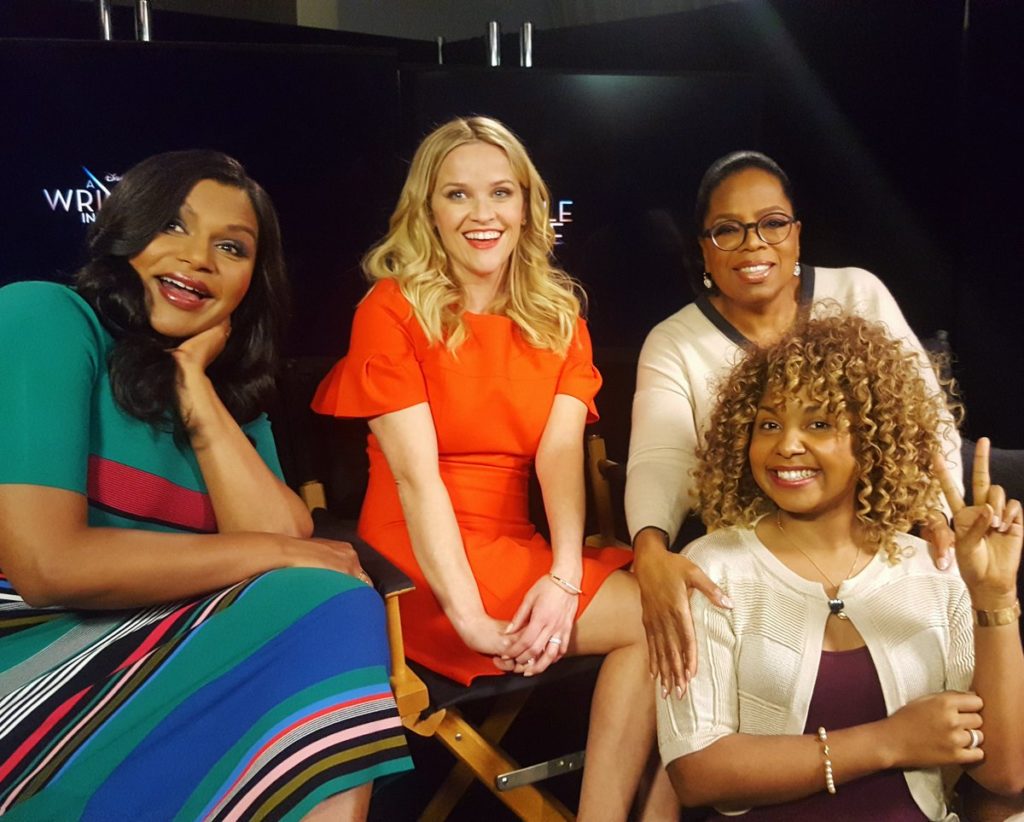 Okay, well one thing that has been a huge part of my life, well there’s been two things, but I’m going say about one thing real quick. Improv. I’ve been doing improv since 2001. I have been a part of a lot of teams. You name an improv school, I have taken classes, graduated, worked there, and have also performed there. Well, you know, respectively speaking.

But, yeah, I recommend improv to people. Because, you might not even realize that you’re in your shell, or you might not even realize the things, or the point of views that you’ve ingested along the way, and that you’ve been spewing out as your own until you actually start taking improv classes, and you’re just having to put that out there. I think it helps with presence. I think it helps with confidence. It definitely helps with speaking and public relations. It helps you build a community of like-minded people.

For instance, we were talking about my Doctor Who passion before. I’m part of Doctor Who Live. We improvise episodes of Doctor Who. I’ve been a part of that for five years now.

That sounds amazing. And yeah, it sounds like it would be a really good way to come out of the introverted-ness that most of us on the nerd side of things, the geek side of things, that we have. That we struggle with.

The second thing that I would recommend is meditation.

Well, the world is a very busy place, and we’re spoon-fed so many messages by this world. It doesn’t mean to, but it is, and we take that in. Along with our business, and then seeing TV, magazines, you know just going through the string on whatever social media platform that you do. It can get very busy in your head. [This world] can feed you a message that isn’t necessarily true, and then that can harm our self-image of our selves. And what meditation does, or what I feel like it does, is that it calms all that busyness and helps put it in perspective. It preserves us before we have to go back into the world again.

I very much recommend meditation for self-preservation. And then also for self-actuation. It’s easier. When you quiet your mind, you can be more focused on what it is that you want to achieve.

You can catch Markeia McCarty, centered yet still geeky on the DC Universe platform’s DC Daily, on Geek and Sundry’s Ask Your Black Geek Friend, on YouTube’s Hyper RPG, and on The Nerdist’s Fangirling.