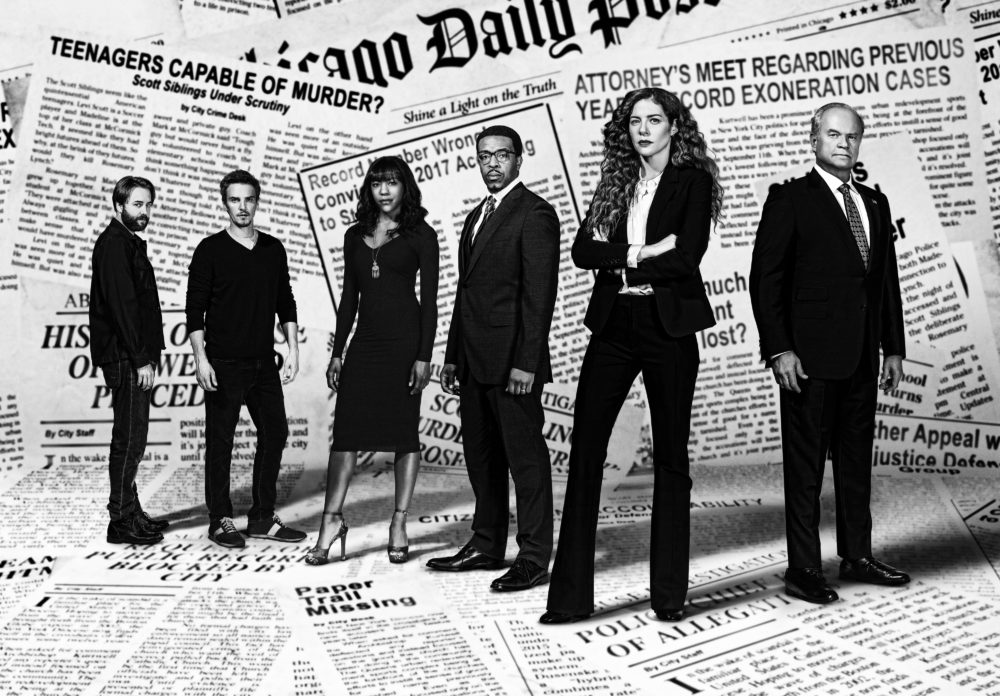 Fox’s new legal Proven Innocent is set to serve up some pretty heated storylines. It’s based on a young lawyer named Madeline who uses her own experience to help clients who are wrongly convicted by the American legal system. Of course, this is a Fox drama, so the story does have some side plot twists. Madeline is herself one of the wrongfully accused in a crime that the show will tease out over the course of the season.

Rachelle Lefevre plays Madeline. The actress is known for her roles in both television and film. The Dome (y’all remember badass Julia?), Mary Kills People, and A Gifted Man are just a few places you may have seen her on tv. She is best known, however, for her role as Victoria in the first two films of the Twilight saga. Her filmography goes beyond that, back 20 years.

BGN got to chat with Lefevre about some pretty heavy topics that she and the cast tackle in her current Fox show. The actress was eager to talk about her role on Proven Innocent and the opportunities the show will open up for a conversation about race. She also reveals just how the show uses its privilege to set an example of how the conversations should be approached. It was a great conversation that we, unfortunately, had to abridge for publication.

I saw know where the producer said the premise [of Proven Innocent] is “what if Amanda Knox became a lawyer?”

Yeah, for the Innocence Project.

When someone asks you what the show is about, would you say that [the premise] is accurate?

Do you think the show is going to like draw some more light to those cases with [similarities to] some of the cases you’re going to be doing this season?

Yeah, I hope so. I have to say our producers were really fearless as was the network in the kinds of cases they let us portray and on the subjects they let us take on. So, I definitely think that we have conversation starters in the cases that we deal with.

The legal drama has been around as a show for probably since the dawn of television. I think that it’s always been a very strong genre on television. But our show is unique in that we are not a street procedural where we’re trying to either prevent our client from going to prison or send them to prison. We’re working backward with people who are already

innocent and trying to get them out.

So our hope is also that, the different take will shed some light on another major issue with the justice system, which is that even if you’re innocent once you’re in the system, everything in the system works against you. The system is designed to err on the side of suspicion and to err on the side of incarceration, as we know because we’re having a national conversation about that now. And so, what do you do when you’re in that system and you’re innocent? How do you take a system that’s designed to work against you and try to change it from within? That’s what these lawyers have to do.

It’s a daunting job and yeah, those stories are quite different from the Law and Order type of shows and others that we’ve had before.

No, I don’t feel like that, and I’m a huge fan of, of SVU [Law and Order: Special Victims Unit] and that franchise and a lot of those shows. But I what I like about our show, for me as an actor, is that I get to also see my life outside of the law firm. That you [the audience] don’t just get the case of the week (where you obviously get an insight into one person’s experience) but you also get to see through Madeleine what it does to a person once they’re exonerated — which is how hard it is to go back to a life you’re rebuilding and how you’re rebuilding from a place of trauma and because you’ve had you’ve had a portion of your life stolen from you.

There’s also a large number of people who are trapped in the system who are innocent and who are dealing with this. These are largely people of color, Black people. Your character is a white person. Do you think [Proven Innocent] is maybe doing a little bit more to open the conversation? Or, is it, are you shifting the center [of the conversation away from POCs and Black inmates]?

I would say that I don’t think that we’re shifting the center because our cast is diverse, and everyone involved has a really crucial role to play. Under no circumstances is my character go on this journey alone. My law partner [in Proven Innocent] is played by Russell Hornsby, as I’m sure you know.

He’s phenomenal along with Nikki [Nikki M James] …she’s amazing. She plays Violet who’s my best friend… The three of us have had unbelievable conversations on set about this. We are all friends, and that is something that we have talked about a lot while filming the show. And our writers — I have to give them so much credit — have done a great job of not making my character necessarily the center of the show.

We do highlight that the experience that Madeline has is one where she’s also learning. I think that’s really important. I think the problem is, you know, I’m afraid of the white savior thing and I think that’s what you’re getting at.

Yes. And you’re not wrong to ask that question. That was something that we were aware of. And the idea is that Madeline’s very much needs the other people at her law firm not just to do the work but also to educate her. We have arguments in our law firm about cases [where this education occurs]. There’s a fantastic scene in one of the episodes where we’re deciding whether or not to represent a white supremacist. Nikki and Russell are on opposite sides and they’re arguing about it. It’s my job in those scenes [sic] — you’ll see I don’t have a lot of dialogue. I have very little. My job is not to weigh in. My job is to stand and listen and learn because they’re debating something that is unique to their experience.

[Lefevre also credits a very diverse writers room which she says mirrors the makeup gender and racial makeup of the fictional law firm in the show.]

I think having all the voices weigh in. Having the POCs, having women, weigh in keeps everybody conscious of what the ACTUAL issues are. I think we can actually get into having a good show without wondering as an audience “Are we going to be walking into a minefield every week?”

I’m not going to do any money-back guarantees that we’re not going to make mistakes because people do. But if we do, my hope for all conversations is that we focus. That if we make a mistake, that the response will be to offer insight, enlightenment, and education. People can only do — and I say this as a white person — I can only learn what people are willing to teach me and share with me, right? When you try to educate yourself, you can only go outside of your own experience so far.  Other people have to let you into their experience.

I know that, as an actor and as a human being, I’m 100% open to [that type of discourse]. So, my invitation is that if you want to tweet to me because I got it wrong, don’t yell at me. I can’t hear that [response]. Give me something else. Give me something that I can use — tools, resources. Give me an opportunity to grow.

You can catch Lefevre tonight, February 15, 2019,01] on Fox in Proven Innocent. She will be live-tweeting the show’s premiere and so will we at 9/8 CST. You can also catch the episodes On Demand after they air.

Nikki M. James is A Podcaster and Storyteller for the Wrongfully Accused on FOX’s ‘Proven Innocent’