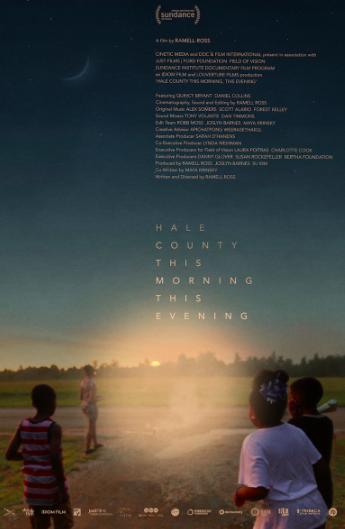 Hale County This Morning, This Evening is a documentary by award-winning photographer and director, Ramell Ross. The film follows the lives of two African American men, Daniel Collins and Quincy Bryant, who reside in rural Hale County, Alabama. Hale County follows the young men over the course of 5 years. Viewers experience and watch Collins attend college in search of better opportunities, and watch Quincy become a father to a beautiful son. The film aims to cover one of the many aspects of the Black experience, particularly in the south, by showcasing the mundane everyday tasks that people do not usually talk about.  Hale County This Morning, This Evening is a beautiful, peaceful, and cinematic piece of poetry that will be released at both IFC Center and Bam Rose Cinemas on September 14th.

In this interview, Ramell Ross talks about the lifestyle in Alabama, the significance of his film in changing the narrative of what the black experience means and is, and the breakthrough changes in Black cinema.

Can you talk briefly about your introduction to photography? How did you get your start? When did you pick up your first camera?

I took a photo class my last year in college and just really connected with it…I connected with it because I played sports and I was a point guard. The way in which you sort of had to the scan the floor, the way it makes you look, the way in which you sort of analyze [all relates to photography]. There’s this thing where they’re taking a lot of D1 athletes and training them in NASCAR races…but I think that all athletes should go into the film industry because there are so many overlaps.

But, personally my mother passed away at that time, so there was a relationship there; between control, spirituality, and photography. There was also a sports connection, and I was kind of obsessed after that. 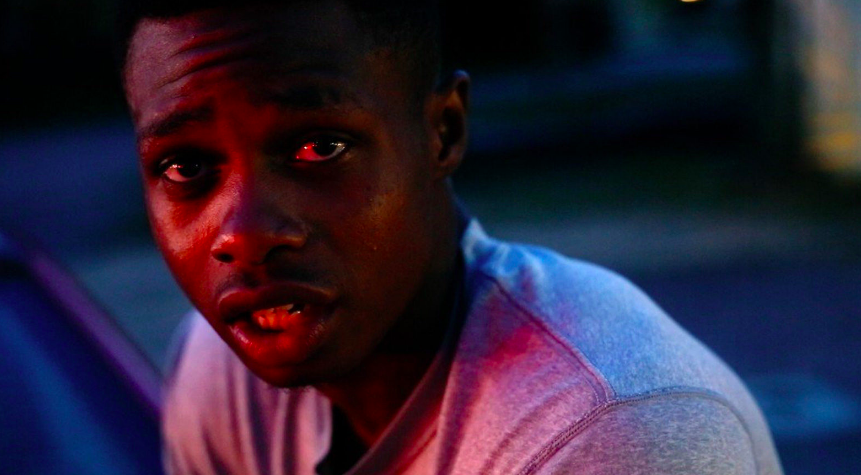 What do you normally photography? What’s your photographic style?

[My style is] one that’s built up on all the different ways of photography, all the different ways of making images, from doing fashion to landscape, to photojournalism, to doing conceptual work, I kind of like, had fun and did all of those until I got to Alabama. And then once I got to Alabama and really started to dig into the idea of representing the people and representing, you know, myself through the people by participating in the sort of larger arc of black image making. I started to begin to make images that I really stand behind. Which are ones that are sort of creating a plural viewing space — an overtly plural viewing space for an African American person in the South, you know, allowing there to be a lot of ambiguity, but then also something that is beauty and sort of sensitivity.

Why did you go to Alabama in the first place? Are you from Alabama?

I spent a bunch of time in the south, my dad’s from North Carolina, so a lot of the summer we would go down there. I also consider the south to be the sort of conceptual home of Black folks and their image myself, and in our image. So I think that that’s kind of why it’s a great place to sort of play with symbols and stuff. I went there to teach in a youth program that was helping students that have dropped out of the high school, get into college and get job training, and kind of get their lives back on the traditional route.

How did you come up with the idea of film? When did you decide to start documenting these people’s lives?

Well, I was already making images, and I had kind of found this way of making images that I thought was really generative. And I wondered about what’s a time-based relationship to this. I picked up the mark three, or whatever, and just, wanted to activate my friends in a very specific way. I guess it’s hard because this is an intuitive transition. It wasn’t like, “man I have to make this film that I want to premiere in a film festival and do all these things”. It was more like, “what’s this like?”, you know, and then you develop once you start.

Well, I think the first thing that struck me and one of the reasons why I moved here is that there’s a lot of time, you know. Whatever that means. Time is a complicated thing. There’s not as much to do, there’s way more looking, there is way more sort of inherent stillness. And my guys, the guys that I hang out with; spend a bunch of time playing video games, spend a bunch of time together, talking about nothing…which is everything. A lot of people spend time building things and fixing things and trying to entertain yourself. [There’s] a lot of eating, a lot of cooking, a lot of laughing and planning. 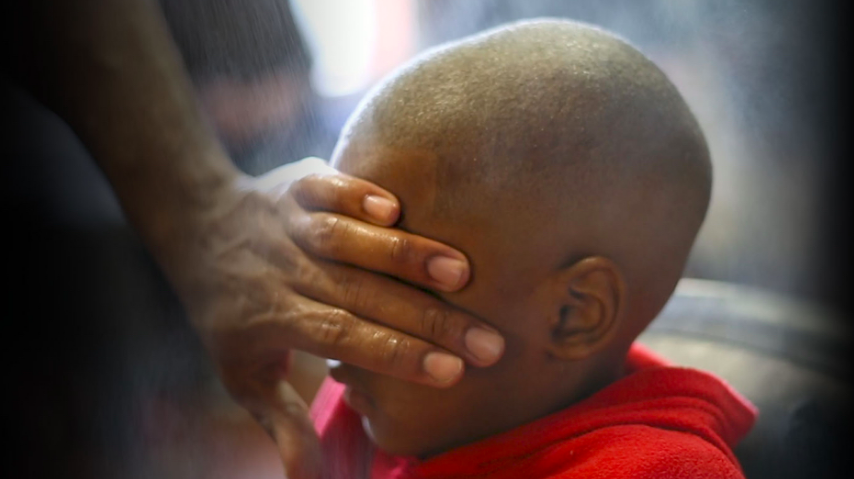 I noticed that you had different sections, and with each section accompanied a question. So you included questions like “whose child is this” or “ where does time reside”, or “what happens when cotton is picked”? What is the significance of the different sections” How did you come up with them? What is the purpose of the questions?

In terms of film organization, the film’s organized from sunup to sundown, so there are approximately 10 to 12 days, depending on how you view it.  Over the course of the film, it’s also organized by movements. There are five visual movements, the fourth being the “Whose child is it”? movement. The questions within those are, to me, the things that I think about, things that don’t have one line answers, things that are complex, things that are evolving, things that are really challenging. And also the core of understanding the relationship between a person of color and the society from which we were born and the society of which we are a part of.

Like [the question] “whose child is this?”, it is bigger than the Black or African American experience. For every human being like, whose children are we? You know, um, I don’t know.

Documentaries are usually saying something, whether that is trying to change a perspective or trying to teach something.  What is your documentary doing? What message are you sending with Hale County?

My film doesn’t have a “message” but my film has an experience to offer that has content, like an extremely curated experience where there are many conclusions that one can come up can come to that’s holy and undoubtedly, based on where the person is in their life. You know, like, I think that a lot of people could watch the film four years later and then they’ll be like, “Oh, that’s what it was doing. I didn’t realize that, because I wasn’t at that point where I could even recognize that to be the case”.

It’s a wonderful, beautiful thing to be able to, to give someone an experience, I think that’s where all knowledge really resides.

How did you meet Quincy and Daniel? Did you work with them?

Yeah both of them. I taught Quincy in the youth program and I coached Daniel separately from school and the program. He had graduated from the local high school and was trying to play basketball and so we connected through that. I was always like a mentor because I’m a little older and a little bit more experienced.

There was one part where a guy was with his friends, and he said: “imagine a world without guns.” Thinking about everything going on with gun control, is there a reason you choose that clip? I’m sure you had tons of clips to choose from, so why choose that one?

It’s disarming… I think that’s one strength of the film, which is the purpose of experience, it’s saying it, but it gives you something else to participate in. And the message is given to you like an advertisement. It’s such a profound thing, which we can’t even imagine in the US, a world without guns.

When watching the film, I was intrigued by Boosie. Can you talk about her?

She’s really interesting. All the protagonists in the film are extremely complex people, you know, which I tried to get to, by not showing you too much about them. They’re just open. But Boosie is a really complex woman. She’s very similar to a lot of people in the rural south. She had kids really early. She found a partner really early, so motherhood is going to be the majority of her life. She got together with Quincy when she was 18. She had a kid by the time she was 19. She’s most recently sort of finding herself. Her kids are old enough where they don’t need daily attention and I think she’s going to maybe go into nursing. She’s going to start to grow into, you know…a woman in the south. I’m excited to see what she becomes.

Do you think you’ll create another part, maybe update us on their lives 5 years from now?

I want to, I wanted to make this movie [into three parts] or kind of shoot forever because they’re going to be part of my life forever. I hope they are at least because they are my friends. It would definitely be interesting to do one that’s hardcore talking next time. It’s interesting because, thinking about it, I could only have made Hale County when I made it. I could never make a film like that again because there’s a lot of naivety in the way in which I was shooting and like my beliefs then. It’s very difficult to repeat.

Can you talk about why you included the Jim Crow images?

This is a thing that’s happening all over cinema right now, at least Black cinema. This is the age of breakthrough Black cinema because more Black people are educated, more Black people have access to the stuff, and we are able to create images that are a departure from the pretty damning stuff that was even coming out 4 or more years ago. I think Hale County is in that dialogue.

Bringing those [Jim Crow] images back in a second is a reminder of the foundation from which we view Blackness and the foundation through which we understand it in media. Perhaps people think that they’re creating new images of Black people, but like any sort of scientific invention now, the origin of that invention was 100 years ago and you’re part of this new dialogue. And so to me, to not forget that is to be able to move past that, but to ignore it, is to be subject to the things that you don’t understand or couldn’t recognize about it.