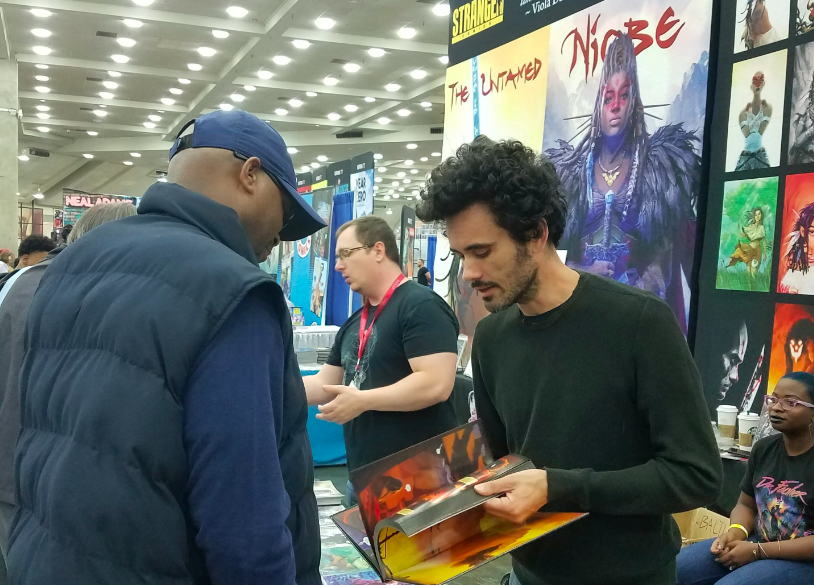 For transparency’s sake, it goes without saying that BGN is and has been a fan of Sebastian Jones and the entire crew at Stranger Comics.

We have interviewed him several times, and we are so much of a fan that there is even a BGN exclusive variant for Jones’s Niobe:  She is Life #1. Last year in October, we sat down with Sebastian to catch up and to talk about some scuttlebutt out in the comicverse.

Why is your company called Stranger Comics?

Stranger is actually the name of the lead character in The Untamed, the first graphic novel in the fantasy world of Asunda that I have created, with a bunch of amazing guys. Also, I’m a big fan of the old school comics of Strange Tales and the term “strange.” I like it. And I always said I’m a fan of Kurosawa and Sergio Leone movies.

How did your creative team meet? You’ve got Joshua [Cozine], Amandla [Stenberg], and Darrell [May].

So what did you dress up as?

I was usually the games master.

Dungeon Master. But when I threw down, I was usually an assassin. I like extremes. I’m either an assassin or a paladin, or a wizard, I like the hard-core extreme stuff. That was Darrell. Josh, I met playing Hero Clix in comic shops, and Amandla I met at a kid’s book festival for one of my kids’ books. I ran up to her screaming like a fan. I said, “You’ve got to write Niobe with me. Oh my God. Do you want to see Niobe?” And then she went to one of my readings for my kids’ books, and no one was there apart from her and her mum. I did the reading essentially in that room of [capacity] 300, to just three people. Her and her mom, and another old lady. And she’s like, “Okay, what’s this project about?” And that was where it started.

You mentioned your children’s books. Did you do those before you started with your series The Untamed?

No, I started The Untamed—honestly, the world of Asunda I’ve been creating for 30 years. I started The Untamed, writing it, boy, back in the early 2000s as a film script to adapt, as a comic book with a film-strip kind of narrative. That took a long time. During that time, I started doing kids’ books. That was Garcelle Beauvais and the I Am book series, a celebration of all cultures, how to be brave, how not to give up. Kids’ books, where there was separation and divorce. We did that in 2012, I think when we first released our first kid’s book. I2009 is when we released The Untamed as a single issue, but then we pulled it. Then we came back and went deep into the lab and then came back down to 2015.

So you have a couple of characters that are very, very popular right now. Can you tell us a little bit about Niobe?

Niobe is kind of like the Luke Skywalker of our world. She is, boy, I mean she’s basically the character I poured my soul in. She’s a reflection of my ambitions, my inhibitions, my hope, my wrath, my own journey I guess as a young person. She’s mixed. She’s half black, half white; the most important thing is she’s half-angel, half-demon to reflect the duality within us that we will share. Also, she’s half-elven (half nomadic Galemren [wild elf]) and half-human. But she is that messiah-type character you follow from a very young age, and she grows into our kind of Cleopatra, if you will, of our world.

So you’ve got books where Niobe is life, she is death. What’s next?

The first one is Niobe: She Is Life, to really say she is. She is life. Niobe: She Is Death, when Niobe becomes a bounty hunter hunting down sex traffickers, human traffickers, and slave traders, reflects how young girls get abducted. Actually, that comic officially hits retail stores November 6. And then I’ll have Niobe: She Is Spirit, which combines her faith and fighting. I’ll finish with Niobe: She Is God, where she’ll bind nations against the devil, her father, the Untamed.

Essessa is a Vorkasian Vampire. She is a very tragic figure. She might’ve been a very good person 2,000 years ago, when she fell in love with an ancient elven dude and she wanted to stay with him. She made her own deal with the devil to gain immortality, and he made her a vampire. That’s the very quick version. Then the elven dude spurned her love. He’s like, “Well, I’m not going to be with you now because you’re a vampire and you’re bad news.” She went back to the devil and was like, “I need my mortality back.” And he’s like, “Okay, bring me Niobe.” So in order to gain her love and her soul and humanity back, she has to bring Niobe to the devil.

Do you have this all planned all the way out? Do you know how Niobe’s story ends already?

I would say I have a very good solid framework, but with a lot of room to wiggle and grow. Malcolm X has this amazing quote: “Don’t be in a hurry to condemn because he doesn’t do what you do or think as you think or as fast. There was a time when you didn’t know what you know today.” You’re always growing. You can’t condemn a dude. You can’t be so hard on some dudes. You might’ve found some revelation, and then it’s 10 years from now or whatever. If I put myself into that corner as well and my characters into that corner, they might grow and teach me things as I get older, too.

Do you find that your writing tends to take a life of its own?

I do absolutely. I do very good rough outlines, and then I like to give myself creative to freedom.

So, you have a Kickstarter ongoing. How’s it going and what is the next goal?

Let’s get into this last thing. So there’s been a lot of discussion on various social media platforms that you guys had sort of piped the HBO connection just to get the price of your books up.

Right? What do you have to say to that?

I say that’s hilarious. We went out of our way. You know what? Like I’m going to work 30 years to try to get an HBO deal just so I can increase the value of a few comics I own. I mean, honestly, that’s the most ridiculous crap I have ever heard. Do you know how difficult it is to get an HBO deal? To increase the sales of my comic books? I put my soul into these comics. I’ve bled for them. I pour everything I have into them, and we had multiple offers. We made a deal with HBO. This stuff is not easy. No, it is not to increase the sales of our comic books. I actually do a little bit better with an HBO deal than a few extra comic sales.

Because I know you’ve been telling me to keep it secret for like four years.

Yeah, I know. Well we didn’t have any deals back then.

Right, but you were working on them.

We were working on a lot of deals, and we were very lucky that HBO gave us a fantastic development deal that we announced in March. So, the answer is — no.

Last question. How will the HBO series integrate with the current comic world?

Well, fingers crossed it gets greenlit. I mean, it’s not a definite, but it’s looking very promising. I’m working with the showrunner on HBO’s Insecure named Prentice Penny. He’s my co-writer. They have great executive producers in Mimi DiTrani and David Levine, and it’s all very, very exciting. It’ll integrate fantastically well. I get to be the lucky dude to write it. So, we don’t have to worry about it veering off into other areas.

But you also have to remember, Game of Thrones is adapted from a book. So there’s lots of fat they have to trim. A comic book has 24 pages. In that case, there’s a lot of extra stuff to build around it for an hour. You read a 24-page comic book in 10 to 20 minutes. Do you have an hour show? So we have to build more material. But the good news is I’ve been creating this world for 30 years.

I’m still getting over people thinking I’m trying to hype… That’s hilarious to me. I don’t have time to do that. Like, yeah, I’m going to just spend all my time hyping.

I’m just excited to share the news for our fans who have been supporting us for so many years and seen a struggle to see us grow and flourish, that they’re excited to see us. So yeah, I’m going to let folks know we have an HBO deal.

If you’re interested in obtaining any of the titles in Jones’ world of Asunda you can go to the Stranger Comics Kickstarter page or the Stranger Comics website.  If you’re trying to see the kid’s books, check out Amazon. But for the best experience and deals, pick a copy of whatever you’re interested in at a comic con. Sebastian and Darrell are always one for a deal.

An Interview with Sebastian Jones President of Stranger Comics