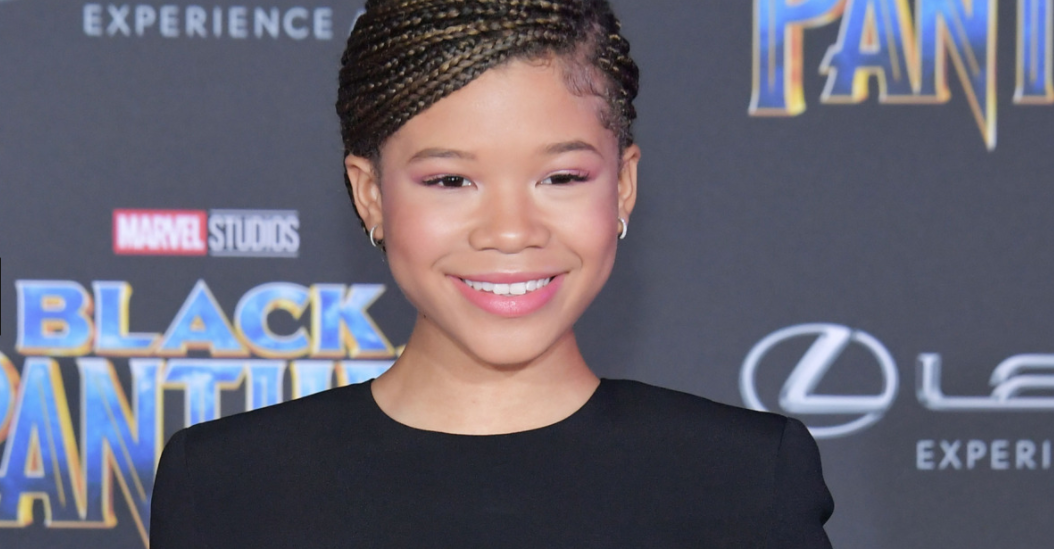 It’s hard to think of Storm Reid, star of the new Ava DuVernay film, A Wrinkle in Time, as a child. At fourteen, she’s all arms and legs, “coltish” it used to be called, in the way pre- and early teen girls tend to be. But even though nearly a might height, she still has a little girl’s face.

Sure, Storm is technically still a child, but her poise and politeness makes “young lady” a more applicable term. From the way she sits with her legs elegantly crossed to her charming habit of addressing adults with the honorific-plus-first-name form (Miss Ava, Mr. Chris), Storm exudes a maturity beyond her years.

But when she greeted me with a warm hug and a huge grin, her excitement was no different than that of a kid on Christmas Eve.  We settled down to the business at hand and talked about her and her role as Meg Murry, girl genius, who goes on a journey to find her long-lost father and winds up on an adventure through time and space.

DaVette See: Thank you for chatting with me today.

Storm Reid: Of course, and I thank you for the opportunity.

DaVette: Now the first time I saw you was in Sleight and I was totally blown by your performance in that. You were just commanding every scene you were in.

Storm: Oh, thank you so much.

DaVette: That was a small film, I mean very small film. This is a huge film. Do you have a preference between the two? What’s the best thing about both?

Storm: I feel it’s very important to have a balance between big budget movies, which are great, but still going back to your roots. I started in independent and smaller films. I just did a movie called Only You with David Oyelowo which was a Blumhouse film, which is a great film but it was smaller than this movie. I like to do both.

DaVette: Yeah, Blumhouse has produced Sleight too, so they love you. As they should.

Storm: Part of a family.

DaVette: Okay, and speaking of family. You have your Wrinkle “film family”.  Was there a bond created on set with you? Did you feel very close to them?

Storm: Yes, yes, ma’am. I did feel very close to everybody and I feel like we did create a family, the Wrinkle Family, I call it. We have a great connection with each other and it’s just really great to be able to work with such amazing people and have that. I’m glad that I have them not only for this movie and this experience, but to have them hopefully in my life for a long time, and to get to learn from them and experience new things with them.

DaVette: One of the things I noticed with the press conference is that when you referred to Chris, you called him, “Mr. Chris”, and I thought, “I was raised that way”, too. It took me a long time to call adults by their first name. Was that just a part of your upbringing?

Storm: Yes, I am from the South and so was my mom. I was born and raised in Atlanta, Georgia and my mom was born was and raised in Greenville, North Carolina. That’s a must there and, of course, it’s the respect and manners. Actually, when I moved out here and my first agent, she was like, “No, you shouldn’t call people Miss and Mister. It makes them feel old.” My mom was like, “No, she’s not going to stop that. That’s manners. That’s something that has to happen,” and if I don’t say it, I get in trouble, so it’s just become a habit and I’ve been doing it for my entire life. It’s normal.

Storm: Yes, I would like girls to take away from the film that they are enough. I would say this message is for everybody, that [you] are enough and you don’t have to conform or you don’t have to alter yourself for society. You may have challenges or you may have faults, or flaws, as people call them, but that doesn’t define you. That just makes you better and that makes you who you are and it makes you unique. That is really going on in our world right now especially with young people trying to fit in and trying to copy what other people are doing or how they’re acting. We should just all be ourselves and we should all be able to just come together and love each other for ourselves.

[Boys] struggle with that too. Being able to be vulnerable and being able to love and to step back and not having to be so masculine, like Levi said [at the press conference], “That toxic masculinity that boys are taught.” Letting girls take the lead and being able to trust in them, in knowing that they could do the same thing you’re doing, or that you’re used to doing.

DaVette: (Speaking of Levi)  Showmance or romance? You guys have a lot of chemistry on screen.

Storm: (laughing) Oh, no. It was showmance.

Storm: Yes, showmance! He’s so great and he’s so much fun. He is such a gentleman. He lives all the way in Australia.

Storm: Meg and Calvin had their connection.  Levi is really smart and a gentleman and comes from such a great family, but he’s just a great friend.

DaVette: Now, talk to me about Deric McCabe who plays your little brother Charles Wallace. He seems to be just an amazing little person.

DaVette: And very talented, as well.

DaVette: Did you guys big sister-little brother all over the set?

Storm: Absolutely, we had six months together. I’m so protective of him and it was great to work with him and basically gain a little brother that I never had! I’m glad that I have him in my life.

DaVette: Now, I hear you love fashion, and you’re obviously quite fashionable.

Storm: I do. Of course, I like the Coaches and the Chanels and all those, but I have a good balance in my own wardrobe.  I might have a nice purse or nice shoes, but I go to Forever 21 or GAP or Topshop, like those. I feel it’s important to have a nice balance and you can still be fashionable and be reasonable and age-appropriate.

DaVette: Do you have any interest in designing yourself at some point?

Storm: Oh, yes. I’ve thought about it and I’ve had some conversations about it. I’m only 14 so I still have time to grow up and think about it. But I would love to do something like that in the future.

Storm: Well, if I had to pick one that I would like to chill with or be with, I would say Mrs. Whatsit.  In the movie, they have a funny relationship and at the end, they do have this bond. Mrs. Whatsit’s is child-like so they could get along very well.

And I can’t pick between Mrs. Reese over Mrs. Mindy or Miss Oprah because they’re just so great and so beautiful and gracious and humble so I love them all.

DaVette: Okay! What can you tell me about your about upcoming projects?

Storm: I do have the Only You film coming out later this year, and then I’ve had some different opportunities and scripts coming my way.

I feel 2018 will be a good year and I hope we get to keep on making movies like this. I get to keep inspiring young people to just come together, make a change with our voices in normalizing diversity and inclusion and representation.

DaVette: That’s a perfect note to end on. Thank you so much, Storm.

Storm:  Thank you so much.

DaVette lives in Inglewood, CA and can’t name a single sports team. She is a filmmaker, writer, wife to Rob, daughter to Martha, and mom to seven (yes seven) cats. When not covered in fur, she’s a regular contributor to Black Girl Nerds because she is one. She runs Running Lady Studios and she is the producer/star of the upcoming web-based talk show, Afro Bites! Follow her on Twitter and IG @mariavah