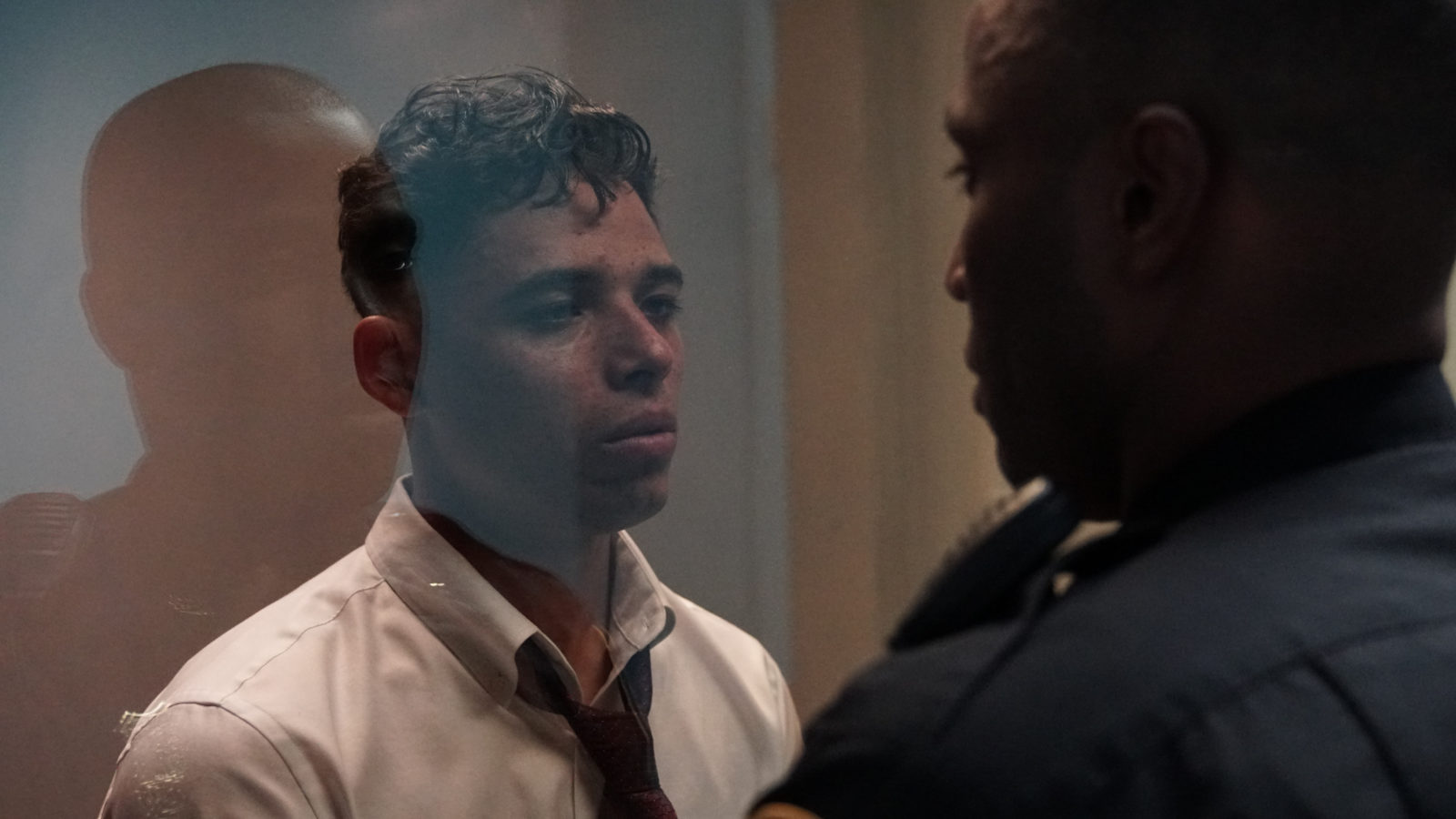 Reinaldo Marcus Green makes a strong directorial debut with his film Monsters and Men. It’s not that we have not seen this story before, but rather it is the transparent and gritty manner in which the narrative seamlessly depicts the reality of many disenfranchised and marginalized people who are a part of the fabric of America. In Monsters and Men there are three main storylines. First, there’s Manny (Anthony Ramos), an inner-city young man and father who is trying to reach for a better life. Unfortunately, he witnesses the cops murder a Black man unjustly and things begin to change. Next, there’s Dennis (John David Washington) an upright, cop with integrity. Dennis personifies the duality of being an African American cop in America, while also understanding the discriminatory ideologies that are interwoven into perceptions of cops, as well as people of color. Lastly, there’s Zyric (Kelvin Harris Jr), a good kid, and an even better athlete who is about to step into the opportunity of a lifetime. Through Zyric, Green delicately depicts the benefits and consequences of embracing social justice activism.

BGN recently had the opportunity to speak with the director, Reinaldo Marcus Green, as well as actors John David Washington and Anthony Ramos about Monsters and Men. It was a very candid interview. Given the current political, social and emotional state of America, this film is timely and carefully raises the question, “How will we separate the monsters of society, from the men?”

Have we created a society in which no one is safe?

Reinaldo: Great question. I’d like to answer optimistically and believe that there are people in organizations that are doing great work, helping to keep our community safe. We are at an unfortunate time where our political system and our education system in our economic system has benefited some and not benefit others. And what we’re seeing now is America’s dark past. We’re at a tipping point…issues are coming full circle. We have some issues as a country to resolve.

There’s a scene in which Zyric is being patted down by the police, and you can see the dehumanization in his face. Can you speak to the psychological trauma that many Black men experience as a result of police brutality?

Reinaldo: We are in constant remembrance that our very appearance is a threat to someone. It’s a problem to feel that way. It’s a problem to feel like I have to constantly think about like, am I going to be safe here? How am I perceived? I don’t know if that’s ever going to go away. It’s just the reality of it. But I want to make people feel that, feel how we feel, in that particular scene.

This question is for you John. There’s a scene where you are being interviewed by Internal Affairs. You would not speak about another officer. Can you speak about the ‘Blue Wall of Silence’ and how you prepared for this role?

John: It was a tough day, shooting that scene. Making the ‘right’ decisions vary depending on what’s at stake at that moment. The right decision can be altered by the effect that it may have on your life, your family. Dennis was thinking about his wife. He was thinking about his son. Sometimes, it’s bigger than the “blue wall of silence”. It’s more about who’s at home waiting for you.

John: It’s a case by case basis. I got a chance to meet a lot of case who do things the right way. The ones that I had a chance to meet, I have a lot of love and respect for. The ones that are abusing their power, I have no love for. At the same time, I would like for this movie to spark a conversation of coexistence. I don’t know what that is, or what it will look like, but hopefully, this movie will create a spark.

Anthony, through your character Manny, we see the cyclical residue of systemic oppression. Can you speak to unjust racial profiling, unwarranted discrimination against people who are oftentimes victims themselves?

Anthony: I grew up in the projects in Bushwick. The way that the odds are against you are astronomical. Like, it’s crazy how you’re born, what your back up against the wall. And you know, I was born into poverty. And I think a bunch of us who grew up in that environment. You know, the way it’s set up. It’s pressure. It’s predominantly Black and Latino…stuffed in these neighborhoods together and we’re like stacked on top of each other in these project buildings. You know, you’re just trying to get it right.

Would you have handled it the same way as Manny?

Anthony: To be honest, I don’t know if I would have put that video out. After playing this character and watching this movie, made me question a lot of things. What is right? What is the right thing to do, and how far will you go to do it? Watching this moving made me want to do more for my community.

John: I’ve been pulled over several times. In this one instance, I remember deliberately putting on a song by the Cranberries. Some soft, indie rock, in an attempt to shift the cop’s perception of me.

Reinaldo, this question is for you. How do we police the police, and should we have too?

Reinaldo: Ultimately I believe that we’re all in this thing together. Yeah, I mean I think that everybody needs regulations, especially when it comes to authority. We must constantly put measures in place. I mean, if a cop has the legal right to take your life, we need to put metrics in place that are safe for the general public. I think that we need to get to the place where fear-based thinking does not rule our interaction with others. We have to find a way to engage one another. There needs to be more social integration. There’s so much fear. People are afraid to speak up. That’s why I use silence so much in this film. We’re taught to stay silent, not say anything.

Do you think that fear perpetuates pain?

Reinaldo: Great question. Yes, I believe it does.

John: This was a good interview.

It was a pleasure speaking with you all today.

Reinaldo: Thank you very much.