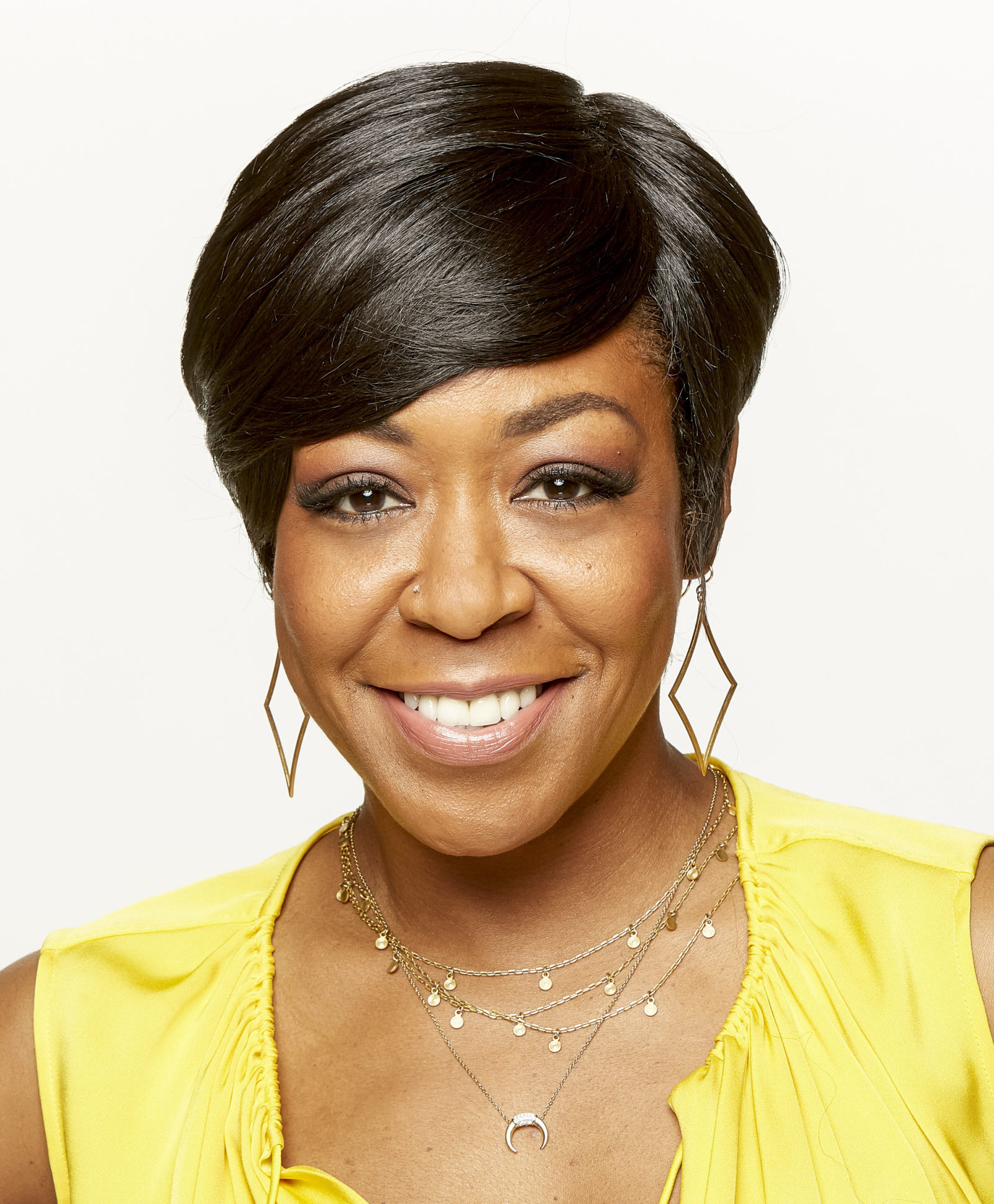 The antics of Pam and Martin (Lawrence) were so over the top that they were scary/funny on the overly-broad 1990s-era Fox comedy Martin. Very few things were off limits and everything was played for laughs.

Since that time, Pam’s character — actress Tichina Arnold — has made a name for herself in a variety of TV shows and movies. BGN recently sat down to talk to her about her new CBS series, The Neighborhood and about what diversity can mean in 2018, plus, could there ever be a Martin reboot?

BGN: What kind of comedy would you call The Neighborhood?

Tichina Arnold: I think it’s going to be a realistic comedy and saying that to say this, you have two families — because I just did the National Association of Black Journalists (NABJ), and one of the questions that was posed to me was, ‘Is Cedric’s character going to be the racist black guy that’s fearful?’

I said, it doesn’t come from a place of fear. There’s a place of unknowing. You’re not necessarily fearful but gentrification is real and there’s not too many Black people excited about white guys moving into their neighborhood. A lot of people are not ready for change. There are a lot of people who do not want to see change, even with this new wave of social media. A lot of stuff is changing and a lot of people are fearful and that’s where racism starts. It’s the fear of not knowing, of not being knowledgeable about certain things.

It’s like I said onstage, you have conversations that happen in a Black home that we speak amongst ourselves that nobody else ever hears and then you have conversations that are said in a white home, so I am hoping that Jim (executive producer Jim Reynolds) keeps this, because he is very excited about the show and that’s one of the reasons I wanted to do it, because of his experience living in a black neighborhood. But it’s like Cedric said, there is the other side. So I understand that the black man wants to tell his story but the white man wants to tell his story too so I’m looking forward to there being two worlds colliding together but we’re telling a story in an honest way. True comedy is always kind of that way and hopefully, this show can be that.

I looked at the script and liked that it was both sides. I used to love All In the Family. I loved watching Carroll O’Connor. There was some stuff, you just go, like damn but you couldn’t take your eyes off the stories. So I am hoping it can be that.

BGN: I love catching up with you, is this your third comedy series?

Tichina: I think I lost count, let’s see, the first one was Martin, no,  I did One on One. I did Martin, One on One, Martin, Everybody Hates Chris, Survivor’s Remorse and now this.

BGN: I forgot One on One.

BGN: Did you know Cedric before this?

BGN: So you were familiar with his work style?

Tichina: Oh yeah. Well, we have mutual friends and I’ve been around Cedric. Cedric is such an easy guy, I think anybody can act with him because he’s that kind of personality; no chip on his shoulder. He’s just a nice guy so I’ve always liked his work and this show was actually one of the last shows I auditioned for during pilot season, literally the last show I auditioned for during pilot season.

BGN: How do you think this show will do with millennials?

Tichina: I think it will do well. We’ve got Marcei Spears, his character is so endearing. Even when watching the show, watching the pilot, I love the scenes that he’s in because he’s that character that represents change. The nerd, to me, represents change because I’m 49 now. I’m not a person that is set in my ways but I’m used to certain things. I’m used to certain things happening a certain way and with Marcei, watching his character, like we are all off-put when Max’s (Greenfield’s) character is hugging us, like ‘why is this white guy hugging us?,’ and then Marcei’s character holds his arms open and it reminded me of my daughter. My daughter has been to multicultural schools all her life so racism for her has been experienced in a different way than me and racism with me has been experienced different than my mom.

When my mom was 13, the teacher called her up in front of the class and said, ‘everybody, this is a N…..,’ so my mom carried that all her life, so you kind of have that Cedric character.

I think it’s important that this show displays all of those facets. It’s not just a Black guy at home being mean to a white guy that moves in (to the neighborhood). It’s more than that and I think it’s going to be a careful balance how we play it as well.

BGN: What does your daughter think about mom being an actress?

Tichina: She’s had some issues with it. We just moved from Atlanta. I was there for four years doing Survivor’s Remorse. I decided for her to go to school there for the last year. I didn’t know if we’d be picked up or not. I thought, ‘I’ve got to keep her close to me and she had started running rings around my mother. They get a certain age and they like the boys and all that so I said, ‘You’ve got to stay close to mommy.’

She had some adjusting to do because she said, ‘mom, people want to be close to me because they know you are on TV. So I talked to her and told her that it is ok to tell people when you are uncomfortable. She’s learned how to speak up for herself so that moving forward in life, she knows how to decipher those people who are really genuine and who are not. It does become trying at times and … let her tell it, she’s a bigger star than me!

Tichina: Oh honey, she’s actually better than me. She dances, she sings. I wasn’t that good at 14. At 14, I was still figuring it out but she’s really good. She wants to be in show business so I am showing her how to be in it.

BGN: Going to be a second generation …

Tichina: Yeah, why not, you know?

BGN: Talk to me about CBS’ group of diversity shows and why there is even a need for this in 2018.

When I was on Survivor’s Remorse, there was a scene with a Chinese character. He owned a sneaker company, he was a billionaire and we hit it in a couple of scenes so I said to our executive producer, Mike, ‘let’s explore us as being together.’ I had never had an interracial relationship on camera. I said let’s explore this because in my lifetime I have not seen too many black women being adorned, truly adorned and loved by … a billionaire.

I want to show black women that yeah, you can be loved by a man who makes his own way. I wanted to display that for because I’d never really seen it and lot of my counterparts  — my mom and my aunt, we don’t even have men in our families, it’s not like there are men at the head of our households so this would be a good opportunity for me to display that anything is possible. So, to me, that is diversity.

Like in God Friended Me, when was the last time you saw a Black agnostic? To me that is diversity. We’re so many things. Black people are diverse. We’re all different colors, sizes, creators. We have so many things about ourselves that we need to tell.

BGN: OK, I still look for Martin episodes just to see Pam antics and I know that Tisha Campbell is one of your friends but do you ever talk about a Martin reunion,  maybe a one-off?

Tichina: We’ve tried to make it happen. We still talk about it. I hate to use the word reboot because Tommy’s (Ford) no longer with us. There will never be a Martin reboot but what we would like to do represent the show Martin where it’s still fun but it’s different. We’re older now, all of us have slowed down. We’ve slowed down a lot! I ain’t as quick as I used to be so we want to make sure that we bring something that people can enjoy and if not, it’s better left alone. That’s how we think about it.

BGN: I know you and Tisha (Campbell) are friends, does the cast stay in touch?

We’re still in touch. Carl (Anthony Payne)  just hit me up yesterday. Actually, we came [to Los Angeles] for ABFF (African American Film Festival) so Martin (Lawrence) was presented an award. That was the first time we were all seen together in 20-something years.