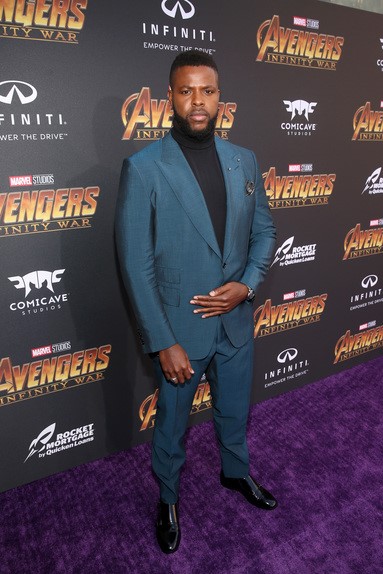 Before Marvel’s film Black Panther took the world by storm barely three months ago, audiences may or may not had heard of one of the film’s stars, Winston Duke. But when the handsome six-foot-five actor lit up the screen with a show-stopping performance as M’Baku, the leader of the Jabari tribe of the fictional African country of Wakanda, the world sat up and took notice. Duke’s impressive physique, rich and cultured baritone voice, along his nuanced portrayal of a complex character of undeniable intelligence, introspection, and wit come together in a heady mix that steals scenes from powerhouse actors Chadwick  Boseman, Angela Basset, and Martin Freeman.

By the time he reprised his role in Marvel’s Avengers: Infinity War, Duke’s obvious charms had already resulted in tribute videos on Twitter and heart palpitations in admiring fans. His good looks have landed him photo spreads in publications like Esquire and TheWrap, the nickname M’Baeku from Essence, and at least one Twitter handle change to @mmm’Baku.  His talent, experience, and star power all but guarantee audiences will see him again in other projects beyond his Marvel role, with should pop up again in any future Black Panther installments.

In an exclusive sit-down interview with BGN, Duke reveals that despite all the love he’s been getting these days, his appearance hasn’t always been an asset in an industry that has demonstrated a tendency to wear blinders when it comes to casting. Duke asserts that his color and physique meant he was only considered for roles where the character was threatening, predatory, and/or criminal.  The actor talked with BGN about what it was like for him before, and now after, M’Baku. How he hopes to make the most of his time in the spotlight, helping to redefine Hollywood’s vision of the “everyman”.

Duke: I think it’s really leading itself into the conversation of what I want to put out there in the world. Because I think what film is doing for me is giving me access to a really great pool of people in this industry. People who create really great films. So, it’s giving me more access than I would have if I wasn’t in something like this. And now I’m getting to really curate and decide what kind of artist I want to be, and the stories I want to tell.

Duke: I want to represent those people. I want those people to be seen as beautiful because everyone’s asking me, “How are you responding to be called ‘thick daddy’ and the women are this, and the women are that.” I’m excited! It was fantastic because I was never in a position where this body was the biggest asset. If it wasn’t being utilized in an athletic way, it wasn’t always an asset. Instead, I was seen as aggressive without doing anything. I was seen as suspicious for just being present. I was overly sexualized for doing nothing. I was overly everything, you know what I mean? I was seen as the aggressor, even when being victimized.

So, this body hasn’t always served itself within this society as an asset. Now I’m being told that it is an asset, and it is being driven by black women, within an industry where I’m not always told that.  The roles I was getting before this movie were always…

Duke: Yes! Predator, villain, and, though that’s not always the worst thing, they were usually non-thinking characters. I didn’t get that in Black Panther.  In Black Panther, my role was a thinking man, unapologetic, strong, deeply masculine with a side of incredible thought and introspection.

Duke: So, that’s the kind of work that I want to put out there. I want to reflect the Winston that I actually am in the world. I don’t want to play myself, but I want to play the spectrum of experience that comes along with this kind of body. I want to make that more accessible.

BGN: My brother is also a big, tall Black man, and I’ve had to say to him, “Look, people see you as a threat even though you’re not. I know you’re gentle as a kitten, but some people don’t know you’re not going to hurt them.” And it’s such a horrible thing to have to say that to someone…

Duke: But you have to.

BGN: Right. So, I mean, I love the fact that that’s on your mind.

Duke: That’s hugely on my mind.  When someone says about me, “Oh my God he’s so sexy,” I find that refreshing, because that hasn’t always been my experience. I’ve thought of myself as attractive, but that wasn’t how the majority of people made me feel. Unless I’m a basketball player or professional athlete, with all the things that come with that, you know what I mean? So, for people to tell me that, I’m honored by it, I’m humbled by it, and I want us to not stop at just the lust. Then question what that means, and what that means for me.