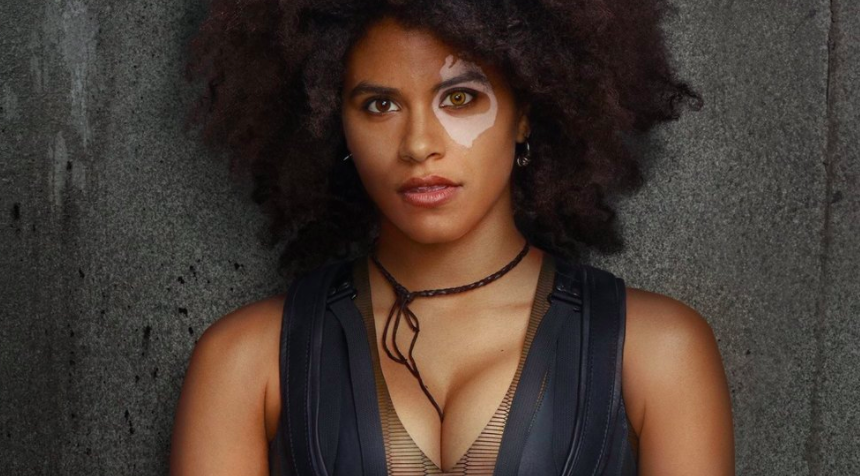 There is one thing you can count on from a Deadpool trailer is that no matter how little it reflects the plot, there will be action and it will be funny.  I got my laugh and also an introduction to my new favorite Marvel Cinematic Universe (MCU) character Dopinder. No just kidding, Domino. The minute I saw Zazie, with her perfectly coiffed crown that would give Angela Davis a run for her money, I knew I had to see Zazie in Deadpool 2.  BGN had a few minutes to talk to Zazie the week of the opening.

BGN: Playing a superhero is a little different than your role as Van Keefer on Atlanta, what did you do to prepare to play a superhero?

Zazie Beetz: So I read a lot of different kinds of comics. I just sort of grabbed across different sort of storylines ’cause we weren’t really adhering to one storyline in the movie and I asked which ones would they prefer that I read and I didn’t specify so I went to a comic book store and I asked one of the employees there, like getting to know Domino, which one would be the best to read — so they gave me a handful and I went through a bunch and I watched a couple of episodes of the older X-Men cartoons where Domino played a role and I went into her sort of backstory and stuff. It was a longer time than sort of engaging with the materials, the story, and universe and then also physically I had to prepare myself for the role. 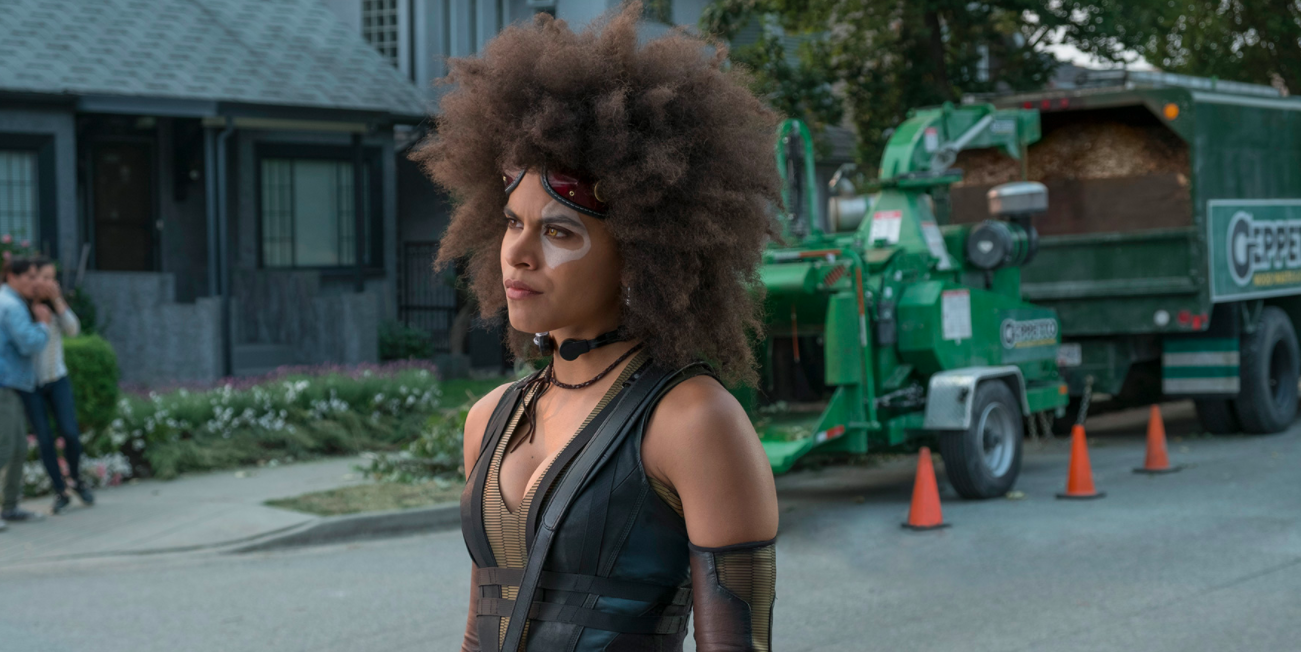 BGN: Given her comic book origins, how do you see the character of Domino?

Zazie Beetz: That is a very interesting thing that we had talked about a bunch sort of all of us kind of collaborating together, what’s the take on her? And I think it’s sort of this interesting combination of kind of like she’s lucky and so she doesn’t have to worry so much about things in terms of sort of day to day. And she can kind of go through the world in a light hearted way I guess. But within that I think there are also kind of comes the question of why even try, I guess, sort of, I think, nihilism can sneak into that, like where is your motivation? And then also I think having been growing up essentially parent-less and kind of coming from a place where people didn’t really care about her as a child I think, that’s sort of shaped what her kind of survivalist nature is.

She’s on her own and she functions on her own and looks out for herself and doesn’t really have the space or the time to look out for other people because that’s what she had to do from the beginning and I think she’s a mercenary and sort of morally flexible, like all the X-Force members. She can be hired on for any job and in this movie, she just gets hired on to this one and so I think it’s also an interesting duality, juxtaposing things that I’m looking forward to hopefully exploring in future films.

BGN: Your Instagram identifies you as Your Domino, what do you mean by that?

Zazie Beetz: Oh, I had to post up an ad for one of the trailers and so I was supposed to link and I wanted to indicate what it was pertaining to but I suppose just sort of like a live-action version. I don’t have to be everybody’s Domino I suppose but I don’t know why I phrased it that way. I was given the honor of sort of taking her off the page and hopefully, I’m somebody’s Domino, I may not be everybody’s but I really try to embody the character the best I could and brought her spirit onto the screen, even if I don’t look like the comic book character specifically.

BGN: Well I know you’ve been sort of getting some negative reaction to playing Domino, were you sort of surprised by that?

Zazie Beetz: No, I wasn’t surprised. I have to say, overwhelmingly it’s been positive and it’s been supportive for the most part. I also don’t really read or really kind of look for any negative stuff, just because I’m pretty sensitive. So I’m just not letting it enter my world so much but I understand there’s a bit of nostalgia of growing up with an image of what a character looks like and grew up with stories and comics and then a bunch of live-action renditions of a bunch of stories to take liberty with look and with interpretation and even with storylines and I can understand people feeling like their version isn’t being told and that’s completely their prerogative and that’s all right. I don’t think it necessarily calls for being inappropriate online or being actively rude to another person, it’s an interpretation, it’s fantasy but I hope I really try to embody her spirit. And I’ve read a bunch about her and we talked about what is the best direction to kind of take with who she is.

Just sort of all the information given to us and I think like with any artwork we took what was on the page and tried to sort of have a creative liberty with it as all the superhero movies do in their own way I guess, in my way there’s just one kind of physically obvious difference. But Rob the creator’s been super supportive and even kind of confirmed that he never assigned a race to this character. So there you go.

BGN: Which member of X-Force does Domino hook up with?

BGN: Of course, so can I take that as confirmation of a Cable-Domino hook up in the X-Force movie?

Zazie Beetz: Well, I literally don’t have a script yet. I don’t think there is one at all but there were potential discussion of maybe having something in the future but of course, honestly, I have no information confirmed so, who knows?

BGN: Okay. Well, now that you have delved into comic nerd-dom, what comics are you reading?

Zazie Beetz: My boyfriend and I have been reading Saga, which Bryan K. Vaughn is the author. Been really enjoying that a lot. I love the multi-racial element of it, I think it’s also funny and the artwork is so beautiful and just sort of the pacificism within it and yeah, that’s one I’ve been really enjoying.

BGN: We really appreciate your time and just let you know that at Black Girl Nerds we really love your depiction and had a great time watching you in the movie.

Regardless of whether you are a Deadpool fan or hater, Zazie Beetz as Domino brings a competence to the newly formed X-Force team and hopefully is the start of many more opportunities to see both Zazie and Domino in the future (pun intended).

BGN’s take (https://blackgirlnerds.com-movie-review-deadpool-2/) on Deadpool 2 can be found here along with a personal message from Wade Wilson on our Twitter page.

Thanks for the shoutout Wade! #Deadpool2 is out in theaters on Friday, May 18! pic.twitter.com/UGDPiPqoby

Deadpool 2 is currently out in theaters.