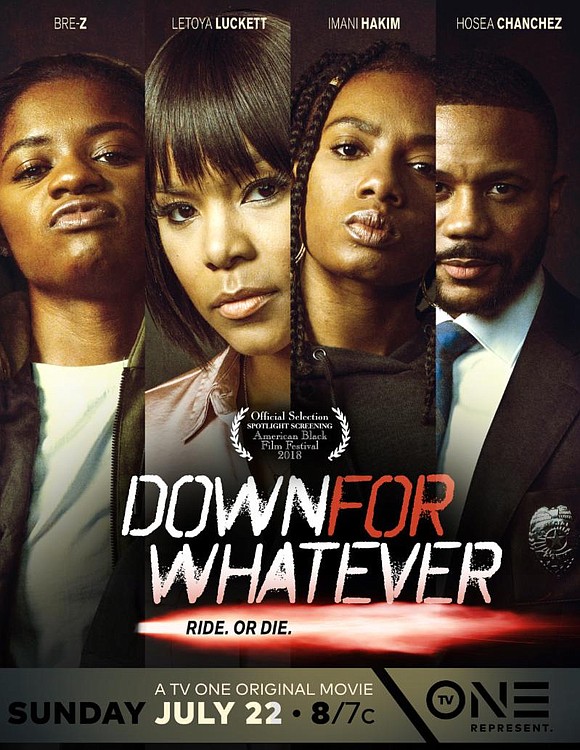 After spending some time at #SDCC, actors Imani Hakim and Hosea Chanchez were down for a conference call to talk about starring in TV One’s original action thriller, Down for Whatever, airing July 22.

Written and directed by Tim Folsome (Jacked, Uninvited Guest, Cutthroat Alley), Down For Whatever chronicles the lives of a married couple, psychiatrist Tracy Jones (Luckett) and police detective Mike Jones (Chanchez). While their marriage is solid, their lives are turned upside down with the murder of Mike Jones’ police partner. The murder may have been committed by Tracy’s teenage sisters, Denise, and Sonya Brown (Hakim plays Sonya). By the way, Tracy didn’t know that she had any siblings because she was a foster child who was eventually adopted. And, Det. Mike Jones doesn’t know that his partner’s alleged killers, could be his sisters-in-law! Yeah, it’s that type of family reunion. 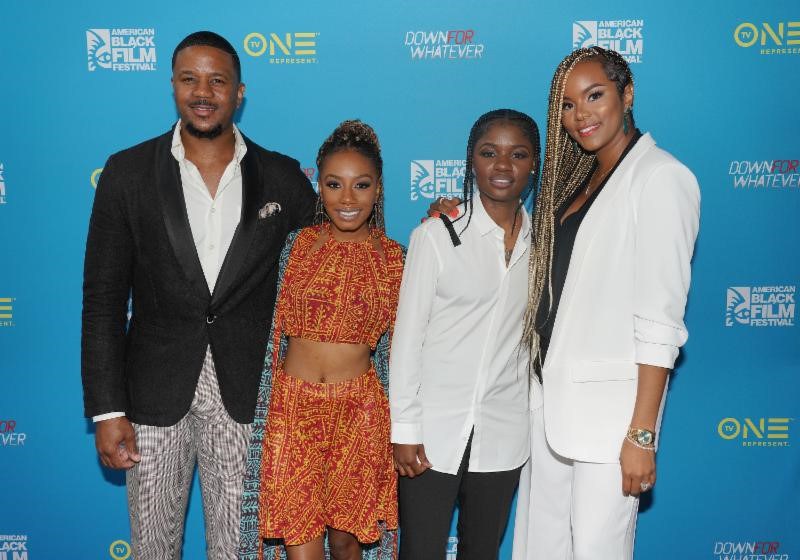 Lisa: Hi, Imani, Hi, Hosea! Thanks for talking to me, today!

Hosea: Where are you calling from?

Hosea: Some great people, there.

Lisa: Well, thank you! Congratulations on this film!

Hosea: Thank you! It was an adventure. We had a lot of fun making the film. And, more so, excited that TV One was really behind the project

Lisa: How did you get the roles?

Imani: My agent sent me the script. I loved the character and the story. I read it on a Friday night, signed the deal over the weekend and was in Atlanta on Monday.

Lisa: Imani, how did you prepare to play Sonya?

Imani: I re-read the script, built her character. I also watched a lot of films that aligned with the movie. Set It Off was a great inspiration. Once I got my hair braided and was on set with Bre-Z, and, in Compton, it was pretty easy from there.

Lisa: Denise is the hothead. Is Sonya the calmer one?

Imani: (Laughs) Denise is definitely a hothead and Sonya is the more rounded and reasonable sister. Denise will protect Sonya and do whatever it takes to do it. They have each other’s backs.

Lisa: Hosea, how did you get the role?

Hosea: (Laughs) It’s the typical, actor’s story. And, the more I tell it, the more I wish I rushed into a burning building, grabbed the script and said, “I’m not leaving until I get the part!” Seriously, I’ve wanted to work with TV One for a long time. I read the script, I love the character, and, the evolution of Mike Jones in a short period of time.

Lisa: TV One is really the network for original programming! 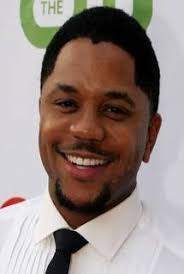 Hosea: I’ve been a fan of TV One and watched them while I was with BET. I appreciate the fact that TV One is diligently reaching out to the community with ABFF and that the network is becoming a place where artists can thrive.

Lisa: Hosea, you play a detective in Down For Whatever. How did it feel to branch out beyond the stereotypical roles, like that in, The Game?

Hosea: I don’t think of it that way. I desire for myself to grow in my acting so that when I am 80, 90 years old, I can look back and say that I am proud of the work I’ve done.

Imani: When people view the trailer, there may be some hesitation about the subject matter. But once you watch the film, I feel that people will be able to emphasize with all of the characters. Hosea does a great job as a cop. Tim does a great job in storytelling so that it is not taking one side over the other. We get all of the characters’ points of view and in the end of the day, everyone is human. Mike is a cop. He is doing his job. The girls, despite what they do, went through some things that led to what happened.

Hosea: I agree with Imani, but, I think it’s kind of unfair to mention the Black Lives Matter movement for this film. This is a completely different type of film. There is no synergy whatsoever, other than someone is being a cop.

Hosea: The piece of gold in the film, to me, is to expose what has happened to youth who are in foster care or have been adopted. Some foster and adopted kids have gone through some great people and turned out doing great things. And then, you have those who go through different circumstances.

Lisa: Let’s talk about ABFF. How was Down For Whatever received at the screening?

Imani: They enjoyed it!

Hosea: A lot of people said that it should’ve been the opening night film!

Imani: Outside of auditioning for more roles, I actually directed my first short film last week. You can look forward to more behind the scenes projects from me.

Hosea: I’ve shot a couple of films since shooting Down For Whatever. I am also looking into directing. I went to film school after The Game, got my certificate, and now, working to get out there to do behind the camera work.

Lisa: Thanks so much, again, for your time!

“Down For Whatever” premieres on TV One, Sunday, July 22, 8/7c. The film is produced for TV One by Eric Tomosunas, Keith Neal, James Seppelfrick, and, Darien Baldwin for Swirl Films. Connect with TV One at www.tvone.tv or on social media using the hashtag #DOWNFORWHATEVER and #REPRESENT.

Here’s a preview of the show, courtesy TV One.

Lisa D. DeNeal is a freelance journalist and published author residing in Gary, IN.