BGN had the pleasure to speak with bestselling-author Dan Jones about HISTORY’s upcoming series, Knightfall. Knightfall is a historical fiction drama following the Knights Templar in France as they search for the Holy Grail, and the author served as the show’s historical consultant.

Dan Jones is a historian, broadcaster and award-winning journalist. His internationally bestselling works include: The Plantagenets, Magna Carta, and his most recent book, The Templars: The Rise and Spectacular Fall of God’s Holy Warriors. He has written and hosted dozens of TV shows including the acclaimed Netflix/Channel 5 series ‘Secrets of Great British Castles’. He writes a weekly column for the London Evening Standard and his writing also appears in newspapers and magazines including The Sunday Times, The Daily Telegraph, The Wall Street Journal, The Washington Post, Smithsonian, GQ and The Spectator. He lives in Surrey, UK.

Kyndal Wilson: Since Knightfall is a television series, it can be expected that certain creative liberties might be taken for the sake of the narrative. In what way will the series differ from the historically accurate details of the Knights Templar?

Dan Jones: I would best describe Knightfall as a show that takes its inspiration from the real history and the rich legend of the Templars, both of which date back to the Middle Ages. There are scenes that are astonishingly faithful to the known events and historical sources – the detail of the siege of Acre 1291 which opens the first episode, for example, is drawn extensively from the so-called Templar of Tyre’s eyewitness account of that amazing urban battle. We deal heavily in the grail legend, so important in Templar mythology ever since the 1200s when Wolfram von Eschenbach first linked Templar-like knights and the so-called graal in his German versions of the Parsifal stories. But there are other areas where history has been conflated, telescoped or re-cast to fit the demands of drama. Pope Boniface VIII, for example, is contextually important in the late-history of the Templars and duly appears in the stories of season 1, despite the fact that in 1306, where we pick up the French events of this season, Boniface was dead. Queen Joan, too, has been written into the story somewhat past the date of her historical death, and her affair in the series is a story fit for Knightfall and not of the history books. But that’s TV historical drama: it works best when it draws inspiration from history, plays knowingly with its material, but never forgets that its currency is entertainment, not slavish fidelity to chronology. If you don’t believe me, go read all of Shakespeare’s history plays.

Kyndal: The portrayal of women during this time period is usually treated as…let’s just say not so great. What role will Queen Joan and Princess Isabella play in the story, and will we see any other female characters represented?

Dan: I think one of the great things about Knightfall is the agency it gives to women, particularly Joan and Isabella, whose storylines riff off their known deeds, but take some unexpected and highly entertaining twists along the way. They kick ass! But if you take a character like Isabella, who in real history became queen of England and ended up deposing her own husband, her story arc isn’t too far-fetched in its tone. There are other cool women in the show too – Adelina and Anna are great, and one of my personal favorites is Altani (Lourdes Faberes) who brings a whole other level of action and excitement to the last few episodes of the season.

Kyndal: The Knights Templar have been featured numerous times in pop culture from Ivanhoe to Assassin’s Creed, in what way will Knightfall be different from depictions we’ve seen before?

Dan: Knightfall is a story projected to run across 50-some hours of TV, so it is an opportunity to look at the history and lore of the Templars in much closer depth than any other recent dramatization I can think of. It also asks really timeless human questions about different individuals’ relationships with their god(s), with each other, with their faith(s) and with their own failings, all seen through the prism of an organization, which set its members often impossibly high standards in the pursuit of the cosmic as well as earthly things. 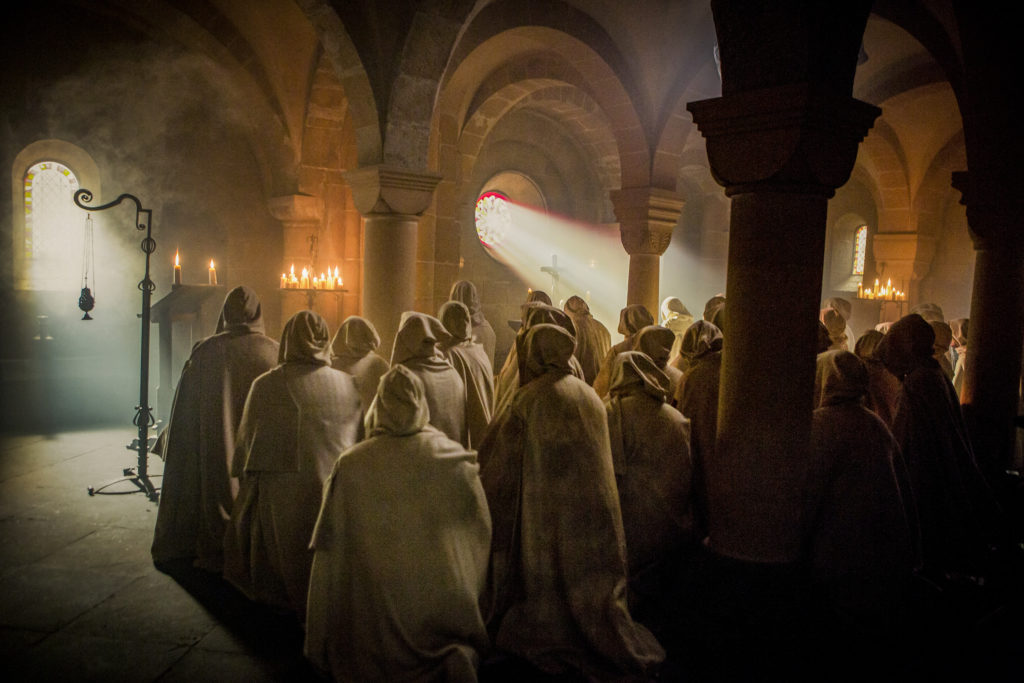 Kyndal: You’ve written at length about the Holy Grail. Can you give us a brief overview of where the concept of the Holy Grail came from and how the Templars got connected to the legend?

Dan: Well, as I mentioned above, the Grail really seems to appear in the early C13th, first in the Arthurian writings of Eschenbach and later on in legends of its own, by writers like Robert de Boron. What it actually is varies: at first it is a stone/plate/bleeding lance, which is a metaphor on some level for Jerusalem. Later legends make it a literal cup: either/both the cup that Christ used to serve his apostles at the Last Supper and/or the vessel Joseph of Arimathea used to collect Christ’s blood on the Cross. Eschenbach was the first to link it to the Templars: the guardian knights of this thing were known as the Templeisen. And of course, Dan Brown and Indiana Jones have helped along the way.

Kyndal: Why do you believe we are fascinated by the Knights Templar?

Dan: Partly because it was a great brand in its own day: the deep links with ancient Christian mythology through the very fact of the order’s name, which evoked the Temple Mount and all that lay there; the powerful patrons, great wealth, worldwide presence and fearsome battlefield reputation. But also, of course, because of the dramatic nature of the fall, facilitated by a form of medieval fake news: dark propaganda and merciless legal persecution aided and abetted by the papacy, which brought about the fall of this astonishingly powerful organization in a remarkably short space of time. Forget the disappearance of Lehmann Bros and Bear Stearns in 2008! This was the original. The other military orders got away with it in 1307-1312, which was good for them at the time, but it means that today we speak a lot less about the Hospitallers, Teutonic Knights and so on. Their loss.

Kyndal: We’re a platform all about nerd culture and nerdy obsessions, and I nerd out over history all of the time. You’ve published several books covering various points in English history from the story of the Plantagenets to the Wars of the Roses, and most recently, the story of the Templars. Do you have a specific time in history or maybe a historical figure that fascinates you the most? If so, why?

Dan: I’m mostly a medievalist. It’s the tipping point between the familiar and the weird, I think: sometimes you study this society and think ‘yeah, I get this, I can imagine being among these people’ and other times you study this society and it’s like ‘WHAT WERE YOU GUYS SMOKING’? That tension between a worldview we can grasp and one that is permanently out of our reach is consistently fascinating to me. I keep coming back to it, again and again. Right now I’m working a lot on the crusades – my next book is working titled ‘Crusaders’ and is a human history of those times. I guess it’s the people that get me. That’s one reason why working on Knightfall is such a thrill: it’s the ultimate way to humanize a period: through thoughtfully built drama.

Kyndal: Are there any new projects you’re working on that you would like to tell us about?

Dan: I’m working on the official Knightfall podcast, which is a hoot. And a couple of new nonfiction books. And I’m just finishing my first step into fiction, which is totally nerve-wracking, because all of a sudden I’m a beginner, all over again.

Rev Dr. Shively Smith on Identity and Blackness in ‘Jesus: His Life’

‘Knightfall’ is full of action, swords, and epic quests