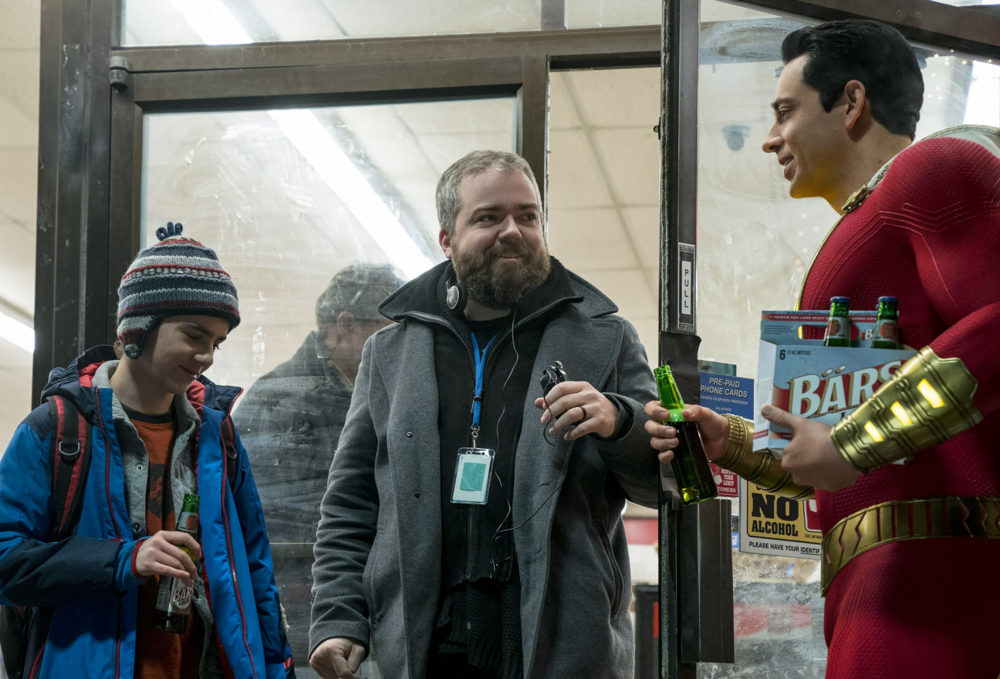 BGN got a chance to visit the set of Shazam while the film was in production in Toronto, Canada. On that cold and windy day, we explored major indoor and outdoor set pieces and heard about the creation of Billy Batson’s world from the Shazam crew. We even got to see Sandberg in action, outside on a carnival set, directing a scene where Shazam (Zachary Levi) was flying through the air. Before we bundled off into the cold, we got to sit down with Sandberg to talk about the film, using his horror film crew on a family movie, and so much more.

I had to ask Sandberg about directing the DCEU’s first family-friendly superhero film after his feature film beginnings in horror. Sandberg was fresh off two back-to-back and very popular films Lights Out and Annabelle Creation. He had also brought along many of the same crew members from Annabelle to the Shazam production, including Jennifer Spence in set production and Leah Butler in costume design. Sandberg, however, assured me that the transition was a non-event.

He also told us that working with the kids was not a problem either. “[The kids] were very cooperative and very happy to be on set.” He went on to say that together, the kids and crew had nothing but great experiences. (Don’t worry. We interviewed the children later. They said the same thing. No residual Annabelle weirdness is happening in Shazam.)

As for the crew, Sandberg said it was all about shooting the film at hand. In fact, working with the same crew on multiple film projects make the learning curb easier. “When you work with such great people, you want to have them on everything.” He explained that familiarity with one another and their work habits are so helpful on set.

Google as an Early Research Assistant?

We asked Sandberg how he approached the daunting task of turning a script into a blockbuster superhero film. His answer was research and Google…huh?

Sandberg described the tremendous amounts of meetings that they had, in the beginning, to establish the Shazam world and work out the rest of the details. He said it was a lot of hard work. The research was needed to give him answers to questions about creating parts of the set. “What does the Rock of Eternity look like?” was one of the questions he had.

“And then, [there was] a lot of Googling.” He told us that Google helped solidify his ideas of how things would and could look on set. He reiterated that those beginning stages were, “a lot of hard work!”

He had Nothing to Do with Black Adam

One of the topics that have preoccupied the fandom is about Black Adam, a well-known villain in the Shazam films. Word got out early that the villain would not be the one Shazam battled in the film Sandberg was producing. But, Shazam fans, don’t blame Sandberg for the decision to omit Black Adam from this film.

“That story [for the film] was basically decided before…When I came on, with New Line [they] had already decided that [Shazam’s] story was enough.” He went on to say that Black Adam’s story would compete with Shazam’s story in the limited space of the film. Sandberg said that he did have to make some adjustments to accommodate the villain’s absence. He just wouldn’t say if there would be a separate film with Black Adam as the villain. (The sly grin on the directors face immediately after that statement said something else altogether. But, we’ll wait for news to be sure.)

This was Never a Chuck as Shazam Situation

We asked about casting Zachary Levi and found that Sandberg did not know the actor as his Chuck persona before casting. And, that’s probably a good thing. “I never watched Chuck,” he said. “I wasn’t that familiar with it.” He described seeing Levi audition as coming in with a blank slate. “There was no, ‘I’m watching Chuck play Shazam’ moment. For me, it was like watching Shazam!”

Levi was an instant hit at the audition. Sandberg said, “Zach embodies this dual nature..” referring to the duality of Shazam and Billy Batson. Levi was perfect for depicting the journey that the superhero goes on throughout the film.

He assured us that we will love the family-friendly DCEU film.