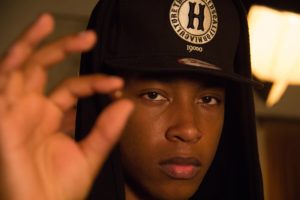 The crucial element in the trick is never the magician returning the same card you pulled – it’s the way they control what you look at, where your focus wanders. Misdirection is the game, leading the eye astray so that the mundane mechanics of the reveal feel fresh and expectations are subverted. You google it after the show and the results might be trite, but therein lies the power of the artist.

JD Dillard’s directorial debut Sleight might have showmanship, but wouldn’t captivate a savvy audience. For a film at least partially about magic (and, “science-magic”), it lacks a decided bit of that necessary misdirection, and the proceedings are often predictable. Sleight is, well, slight. Although it rarely musters excellent storytelling, it’s not without some interesting ideas and well-realized cinematic flair.

We encounter main character Bo (Jacob Latimore) en media res, acting as guardian for his younger sister Tina (Storm Reid) in the wake of their parents’ tragic deaths, and performing as a charismatic street magician to the bridge-and-tunnel slackjaws during the day. At night, he’s a low-key drug dealer (potentially to these same slackjaws, which is an interesting thought), selling coke and molly out of a jansport and keeping a low profile. His responsibilities are split, jagged around the edges where they separate from his home life, but there is something about these worlds – daytime/evening, performance/distribution, brother/dad – and the armor he dons to navigate them with authority that musters the idea of routine, and also serves as the story’s persistent rhythm.

Pull too hard on any of these threads and the house comes crashing down. Why not finesse a combination of sleight-of-hand with drug dealing during the day? Would a Gigeresque body-modification of an electro-magnet in your arm really be sustainable with a hydrogen peroxide-laced q-tip? Why offer that rare example of a Black scientifically-gifted young man on the screen but attach it to an R-rating?

When the movie works, much of it feels purely sourced from Latimore’s performance, always seeming absorbed in his duties while distracted by their given weight, and his brewing determination captivates the viewer to follow close. The fact that Bo is a brilliant Black STEM student who has forfeited his education because of life’s responsibilities is an important note, but there is a lot to the story that’s missing, seemingly sacrificed to the film’s aspirations to nuance but leaving the plot somewhat misguided and frail. This doesn’t encroach on the smooth camerawork or the emphatically polished soundtrack, and aesthetically you’ll be wondering how the hell these filmmakers pulled off a product with this much panache. 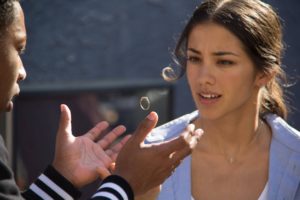 But as I said: pieces are missing. When Bo meets his romantic interest Holly (Seychelle Gabriel), the story rushes them helplessly into love after two awkward scenes. The Bechdel Test doesn’t pass, and the female characters usually amount to little more than plot devices to protect, subdue (Bo robs a club manager client at some point), or rescue, and while those rescues are a little blundered and therefore feel “real” to a point, the denouement’s simplicity and its hints at a sequel are greedily confusing.

And then there’s Dulé Hill, who genuinely tries his hand against typecasting as the primary villain, to uneven results. Watching Hill grasp for what simmers or scares is certainly entertaining, even compelling at times. His character is something of a gentleman-kingpin, possessing crystal-clear enunciation and an almost dandyish quality, aspects which are thrown into relief in scenes like the one where he pummels an enemy flunky into pulp for imprecise reasons. Hill is stretching, trying to merge the unpredictable feral emotion of Breaking Bad‘s Tuco with the formal frigidity of King of New York‘s Frank White. It’s an incredibly demanding pursuance for an actor and his hit percentage varies, even within a single scene. 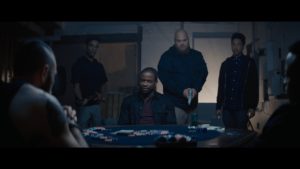 Sleight is ambitious, but also often intuits what it can best achieve under stress (I refer primarily to the sub-$500,000 budget), devoting more screentime to its strongest qualities: Latimore pondering the future of his family alone in his bedroom, fun gee-whiz street magic episodes, ambient city photography, and character moments which usually leverage Latimore to carry the weight. That ultimately means that the ones that miss their mark are made prominent and memorable, including a very brief scene where Bo and Tina share an ungainly hug late in the movie, an emotional aside that reads like an embarrassing first take. I cringed. Still, we’re talking about a very brief shooting schedule, and an earlier scene where he teaches her how to cook breakfast is contrastingly subtle and convincing.

If my review seems divided it’s because I found a goofy exchange or awkward beat for every strong, well-expressed idea. For those unable to distinguish appraisals of indies versus big-budget fare, I expect a frostier response than my own. Taken as a 90-minute genre mashup centered on people of color, it’s difficult to interpret which failings in Sleight are due to filmmaker inexperience or constricted resources. I’m inclined to think that more of its hangups hinge on the latter, and I can imagine that certain theater-goers might end up appreciating the few parts that work, finding Bo as a suitable addition to that rare pantheon of Black superheroes on a big screen.

Sleight releases in theaters on 4/28. Read our interview with Latimore and Dillard here. Download the prequel comic here – it’s recommended reading before you see the film.