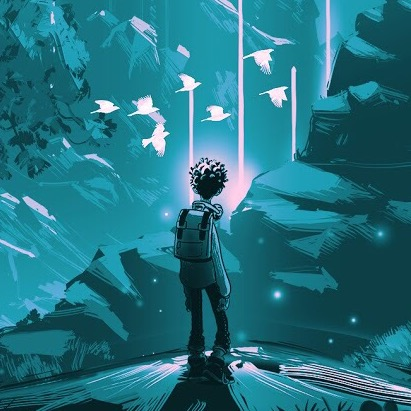 Some of you may have heard of Cam O’bi already, but remember the name.

I first learned about Cam from Noname’s deeply personal, fraught, but sublime classic Telefone from 2016, a bonafide classic record of startling intimacy. The most obvious star track would have to be “Diddy Bop,” the breezy outdoor jam featuring Raury and Cam O’bi, a throwback summer joint that smelled like barbecues and stray balloons, like kids chasing harmless trouble on those endless school-less days before cellphones. Cam co-produced this track, and thereafter grabbed my immediate attention.

Prior to this, Cam’s considerable talents behind the boards graced artists like Chance the Rapper and SZA, but he’s now cooking up a new and proper full-length debut: Grown Ass Kid. With guest spots secured from Chance, J. Cole, Noname, and more, Grown Ass Kid is fitting to be a proper, fully-realized arrival for the young artist, and I personally can’t wait.

The first available track dropped today, and it’s a gem. Cam O’bi has an ear and talent for shoulder-swaying, head-nodding swing on his drums, and “Tenderheaded” featuring Smino nails this. The lyrics are unmistakably upbeat but introspective, it’s glowingly characterful while being a little bit sad and gazing at its shoes at the same time. Cam O’bi’s young self musing in hope as he enters the barbershop:

“walked in the barbershop asked me what I wanted
I told that man I wanted to look like Superman,
but when he had the long hair
you know, kinda like Michael Jackson?
The damn barber just started laughin’.
I cried as he gave me that bald fade.
Afro puffs hit the flo’, symbolic of shedding my innocense
I guess I thought they were magicians or alchemists
or mathematicians
with algebraic calculus algorithms designed to cure me of my nappiness
like a perm burned off my happiness
I sat silently acquiescent
pitfalls of adolescence”

Check out “Tenderheaded” right here and keep an eye out for a Grown Ass Kid announcement this year—it’s a long time coming!