What’s going on in the TV world?

Issa Rae is continuing to add more projects to her plate. In addition to Insecure, she’s working on two other shows for HBO. She will executive produce Him or Her with ex-Daily Show writer and Emmy award winner Travon Free. The show will be a single camera half-hour comedy about a bisexual black man navigating his way through life and relationships. The second show, Sweet Life, was co-created with Scandal producer Raamla Mohamed. It follows rich teens growing up in Windsor Hills, also known as the Black Beverly Hills.

Speaking of HBO, the first teaser trailer is out for Jessica Williams and Phoebe Robinson’s series of specials. The series entitled 2 Dope Queens is based on the hit podcast of the same name hosted by the two. Directed by fellow comedian and star of Amazon’s One Mississippi Tig Notaro, the show premieres on Friday, February 2 at 11:30 p.m. Filmed in front of a live audience at Brooklyn’s Kings Theatre, each episode will focus on a different theme. The February 2nd episode will focus on New York and will co-star Jon Stewart. The second episode’s theme is Hair with Sarah Jessica Parker making an appearance. The third episode is Hot Peen with Tituss Burgess. Finally, the fourth episode is Black Nerds (aka Blerds) with Uzo Aduba. The two will discuss a number of topics including Cocoa Khaleesis, dating white baes, sex, New York living, which borough has the best pizza, and more.

Grown-ish released two new promos this week. The series premieres on January 3 on Freeform. Grown-ish is the spinoff of ABC’s Black-ish and stars Yara Shahidi. She plays the Johnson’s eldest daughter Zoey as she tries to navigate a new life in college.

John Legend has been cast in NBC’s version Jesus Christ Superstar Live in Concert! Based on the Andrew Lloyd Webber and Tim Rice rock opera, this will be NBC’s fourth live musical, following The Sound of Music Live, Peter Pan Live! and The Wiz Live! The original Jesus Christ Superstar premiered on Broadway in October 1971. “It’s such a powerful, meaningful musical and I’m humbled to be part of this performance. We’ve already formed an incredible team, and, as we finish casting, I’m certain we will put together some of the greatest talents around to do this work justice,” Legend said about joining the cast. Jesus Christ Superstar Live in Concert! airs on Easter Sunday, April 1.

Netflix’s Narcos is going through some major casting changes for its fourth season. Game of Thrones‘ Pedro Pascal will no longer be starring in the series. He played Javier Peña, a DEA agent on the trailer of Pablo Escobar in the first two seasons and then the Cali Cartel in the third season. The fourth season will be set in late 1970s and ’80s Mexico and will focus on the Guadalajara cartel. Replacing Pascal are Ant-Man’s Michael Peña and Rogue One: A Star Wars Story’s Diego Luna.

MGM has released a new trailer for Stargate Origins. As the title conveys, this takes place before the movie and tv show. It follows Catherine Langford, the daughter of the archaeologist Paul Langford who found the Stargate in Giza. The trailer has a Raiders of the Lost Ark feel to it, focusing on the action and adventure the show will provide. The show will air on the Stargate Command site, the location for all things Stargate, starting February 15.

The first images from Troy: Fall of a City have been released. The show is being made by BBC in conjunction with Netflix. BBC will air it in the U.K. and Netflix will launch it internationally. The eight-part series follows the Trojan royal family during the mythic war. The series stars Interstellar‘s David Gyasi as Achilles (pictured above). David Threlfall, who plays Frank Gallagher on Shameless, and The Missing‘s Frances O’Connor will also be part of the cast. The Night Manager’s David Farr is writing the series. This “will be like nothing broadcast before: a 3,000-year-old tale crafted on a huge scale,” said BBC drama boss Piers Wenger.

Continuing on the Netflix train, they dropped the teaser trailer for their new crime drama Seven Seconds. Based on the 2013 Russian action movie The Major, the ten-episode series stars Regina King as “a devout churchgoer and a proud wife and mother. After she moved out of the projects with her family and becomes a first-time homeowner, she is shaken to her core when she learns that her 15-year-old son, Brenton, has been involved an incident. When she learns that there’s more to Brenton than she and her husband were aware of, Latrice is rocked by the power of her anger at her son’s predicament — an anger that will change her life, her relationship with her husband.” Veena Sud, the creator of The Killing, is serving as showrunner.

Finally, YouTube is partnering with Lionsgate to produce a new addition to the Step Up universe. Step Up: High Water focuses on the students and staff of a performing arts school in Atlanta. From the trailer, it looks like the city plays as much a character as the ones the actors portray. The series stars Ne-Yo and Naya Rivera along with Lauryn McClain, Petrice Jones, and Marcus Mitchell.

Time wrote a feature on A Wrinkle in Time in their latest issue. In their cover story they emphasize that this is a movie made possible and made great by the women involved. From Madeleine L’Engle’s refusal to give up on her novel to Catherine Hand, the producer who wanted to see this book she love brought to the big screen, to Ava DuVernay who took on this project to be able to create new worlds, to the women gracing the cover, each bringing something special to the project. You can read the article here.

Debbie Ocean is getting out of jail on parole but she’s not quite done with crime as we see in the first trailer for Ocean’s 8. She immediately recruits a team of 7 women including Cate Blanchett,Rihanna, Mindy Kaling, Awkwafina, Cate Blanchett, Sarah Paulson, and Helena Bonham Carter. The job is a heist and the score is an expensive necklace on the neck of Anne Hathaway’s character at the Met Gala. The film follows in the footsteps of the Steven Soderbergh’s Ocean’s trilogy. Ocean’s 8 will be released on June 8, 2018.

A new trailer is out for The Nutcracker and the Four Realms. The film is based on the E.T.A. Hoffmann’s 1816 novel The Nutcracker and the Mouse King and Pyotr Ilyich Tchaikovsky’s The Nutcracker ballet. It follows a young girl named Clara, played by Mackenzie Foy, who finds her way into another world populated by an army of mice, fairies and gingerbread soldiers. The film, directed by Lasse Hallstrom, also stars Morgan Freeman, Helen Mirren, and Keira Knightley.

A king will rise. Watch the brand-new spot for Marvel Studios’ #BlackPanther, in theaters February 16! pic.twitter.com/1VUD9fsnqb

Marvel chose Christmas Day to drop a new tv spot for Black Panther. The anticipation is at a fever pitch. These little tidbits Marvel keeps dropping just make us more hungry for the film.

We reported earlier that Sony Pictures is remaking the 1972 blaxploitation film Super Fly. The project is moving forward. Director X aka Julien Christian Lutz is currently in talks to direct. Alex Tse is writing the screenplay. His previous work includes Watchmen. Deadline reports that Grown-ish star Trevor Jackson is a frontrunner for the main role. The original film followed Youngblood Priest, a cocaine dealer looking for one last score before getting out of the business.

We have a trailer for Gringo. The film stars David Oyelowo as a mild-mannered businessman who gets kidnapped by the cartel on a work trip to Mexico. Then begins a dangerous adventure involving Mexican drug lords, international mercenaries, and the DEA. The film also stars Thandie Newton, Charlize Theron, Joel Edgerton, Amanda Seyfried, Yul Vazquez and Sharlto Copley. From a script by Anthony Tambakis and Matt Stone, the film is directed by Nash Edgerton.

Bleecker Street has acquired U.S. distribution rights for Papillon, Michael Noer’s remake of the 1973 prison drama starring Steve McQueen and Dustin Hoffmann. The film premiered at this year’s Toronto International Film Festival and stars Charlie Hunnam and Rami Malek. The film follows “Henri “Papillon” Charrière, played by Hunnam, a safecracker from the Parisian underworld who is framed for murder and condemned to life in the notorious penal colony on Devil’s Island, where he forms an unlikely alliance with convicted counterfeiter Louis Dega, played by Malek.”

Get Out will receive the Producers Guild of America’s 2018 Stanley Kramer Award. “The electrifying response to ‘Get Out’ demonstrates that the power of motion pictures to crystallize and reflect our collective social anxieties remains stronger than ever. It’s hard to imagine two more different sensibilities approaching the problem of race in America than Stanley Kramer and Jordan Peele, but despite the different paths their stories take, their power springs from the same outrage, fearlessness, and passion,” Producers Guild Awards Chairs Donald De Line and Amy Pascal said about the film. Get Out is produced Jordan Peele who also wrote and directed the film, Sean McKittrick, Jason Blum, and Edward H. Hamm.

Logan Browning, who plays Samantha White Netflix’s Dear White People, has a new project. She will be starring in The Perfection opposite Girls and Get Out star Allison Williams. The film is described as a horror thriller “about two cello prodigies and a sinister obsession that drives the dark pursuit of perfection.” It’s being directed by Richard Shepard from a screenplay by Shepard, Eric Charmelo and Nicole Snyder. Browning just wrapped up season 2 of Dear White People. She will also appear in the fourth season of Hit The Floor, which has moved from VH1 to BET.

This Is Us‘ Faithe Herman is joining the cast of DC’s Shazam. She will play a friend of Billy Batson (Asher Angel). Batson is a young child with the ability to channel the power of the Gods and become an adult superhero named Captain Marvel. Herman’s character will be part of Batson’s group of friends within his group home. If the movie follows New 52 continuity, she may become a mystical superhero too.

Finally, the Quentin Tarantino’s Star Trek is continuing on track. The Revenant scribe, Mark L. Smith, has been chosen as the screenwriter. Tarantino is working with J.J. Abrams to produce the film through Abrams’ Paramount backed Bad Robot Productions. Right now it’s not certain if Tarantino will direct the film or not. Right now Tarantino is working on an untitled project on the Manson family murders while Abrams prepares for Star Wars Episode IX.

In other news, Roxane Gay is going to be working on a new comic. She was previously writing the Marvel’s Black Panther spin-off, World of Wakanda. Unfortunately, that book was canceled back in June. A family of master thieves is an interesting premise. I look forward to seeing her bring it to life. 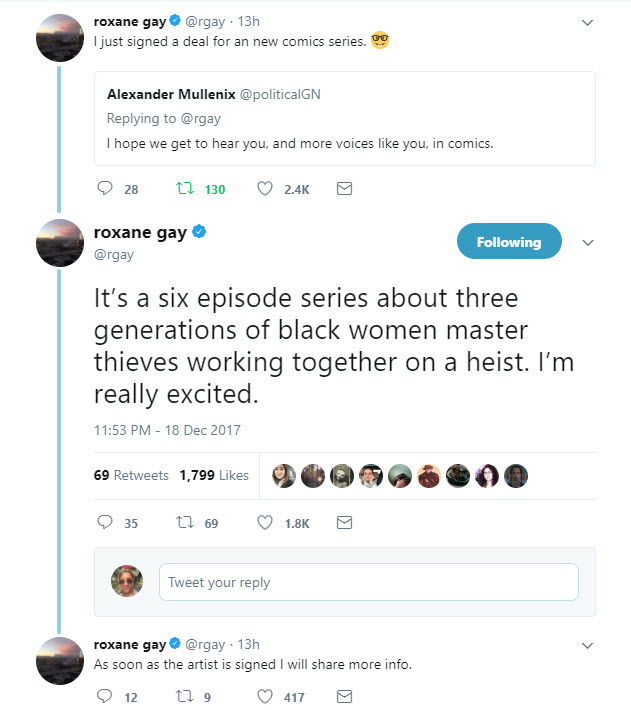