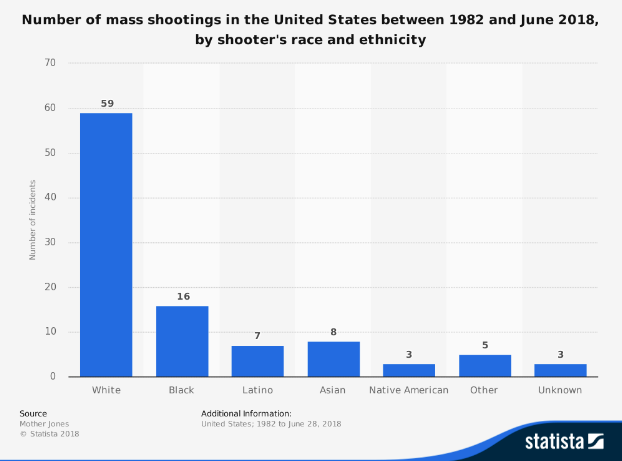 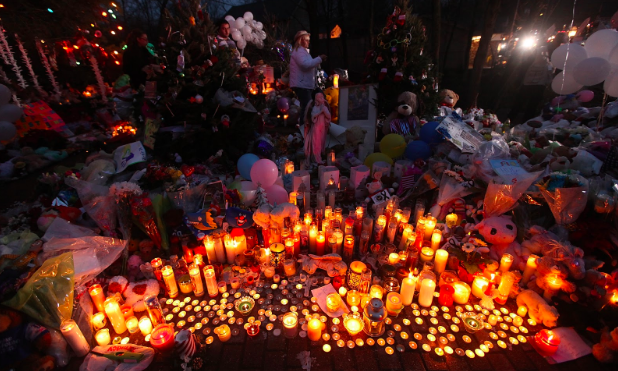 White men are shooting up our country and no one wants to talk about it. Like everything else that this privileged group does in the US, mass shootings are a topic that is blamed on everything but the white men who perpetrate them. The most recent shooting, at a Jacksonville, FL Madden tournament is another notch for them. Instead of asking why is this group of people more likely to perpetrate the crimes, the conversation is shifting. The blame is being placed unjustly on the gaming industry.

A look at the numbers shows how misguided it is to let the gaming industry take this one. According to a 2018 study by Mother Jones, 101 mass shootings were perpetrated in the US between 1982 and 2017. About 59 of those were performed by white men. That’s well over half or 58 percent of the mass shootings. My math nerds can check my work here. Don’t talk to me about proportions. White men are only 31 percent of the population in the US as of the last census. There is no way that to explain away how they do more than half the mass shootings in the past several years and no one is looking into why. It’s time to look into the white males of the US and figure out why they are shooting up our country.

What about the black guys…Chicago—Chiraq and whatnot? A look at the graph above tells you why melanin abundant men are not the most pressing problem here.

Mother Jones Magazine found six mass shootings so far in the US this year. The Jacksonville, FL shooting makes seven. White men were the shooters in all but one of these incidents. Yet, we still keep letting this topic pass, letting it drop. Detroit Free Press journalist Rochelle expressed the right sentiments when she wrote “Who Do Most of America’s Shootings have in Common? White Male Culprits”. Her outrage came after the Stoneman Douglas High School shooting that cost the lives of 17 people. The white guy who pulled the trigger had dropped enough clues for the most bumbling detective to find him if they wanted. But no one paid attention.

So when do we get to really talk about why white guys are allowed to keep shooting up our country?

We certainly delve deep into Blackness every single time a Black person is caught doing it. Remember John Allen Muhammad and Lee Boyd Malvo, the Beltway Snipers? They killed 10 people and injured three more over the course of a month in 2002. Afterward, investigators found a rap tape in the car. You can guess where that went. Then, the wife came forward revealing domestic abuse at home. Suddenly all Black men were on trial for their anger and aggression.

It’s not just us. Let a Latino guy commit this same crime, and suddenly we are talking about building walls, and “illegals” ruining the country and trying to check everyone who even looks a little Latin for ID. God forbid the shooter is Muslim. I don’t even want to entertain the public assault on that community.

But, every single time that a white man is the person pulling the trigger, no matter how heinous the crime, we never get to talk openly about white men and mass gun violence. Instead, y’all blame it on something else – mental illness is the current scapegoat. You don’t want to talk about what is clearly a problem.

Just look at the numbers.

Of course, the reason that white men are allowed to continue to shoot up our country is white privilege. Ironically, it’s also privilege that seems to propel them to choose mass shooting as a means to solve their problems. The Madden shooter took his video game losses out on his opponents using a gun, not words to relieve that aggression. He had so much disregard for other human lives that he saw them as no better than characters he manipulated in the games on screen. Think about ego and lack of empathy that it takes to think you had the power to do something like that. It certainly doesn’t come from the melanin abundant in this country who are constantly battered by dog whistles and remnants of Jim Crow, slavery, and such toxicity still gumming up our journey through this place. No, that is the mentality of a person with no hindrances on his existence. It’s someone who is rarely rejected, who likely never heard the word “no” seriously directed at him.

The system enables him. New York Times columnist George Yancy said it best, “There is also an appalling lack of courage, weakness of will, spinelessness, and indifference in our country that helps to sustain it.” 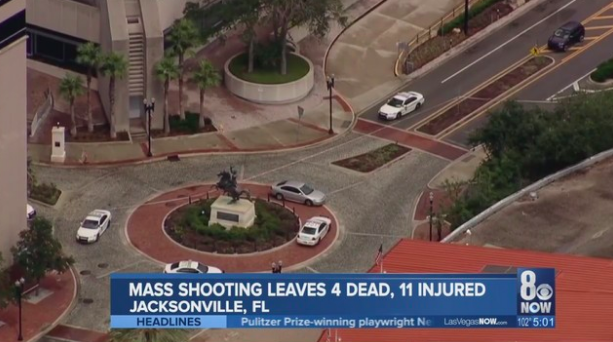 We need to have this talk about how white privilege is not only allowing these shooters to see a gun as a viable problem-solving tool, but also how it shuts down any serious conversation or focus on the real anomalies who should be the focus of ALL the studies on mass shooting in the US — white guys. We need to discuss how white privilege allows the people who are supposed to be bringing these questions up to easily let them fall by the wayside. We must discuss why the people who have the power to do something about this problem are trying so hard to get the world to look for another scapegoat.

It’s happening again. Instead of there being a dialogue about how another white guy shooter took innocent lives, this time over losing a video game, we are bickering over Trump and Google searches. In the meantime, the problem is not going away. Some other city has a mass funeral coming up before 2018 closes — at this rate about a half dozen more mass shootings will probably take place this year. Does anybody want to place a bet on the majority of the shooters being white men? No.

I guess we will save up our thoughts and prayers for the next time a white guy doesn’t get his way and decides to use a gun to express himself. Y’all don’t seem to have a problem with it at this point.