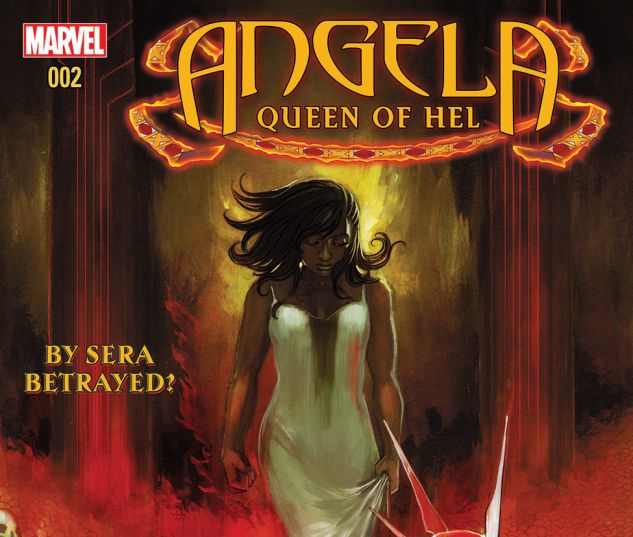 June is Pride Month, often a particularly festive time of the year when queer people of color examine the current state of the media and find themselves, once again, lacking in representation.

For now, if you’re looking to celebrate your queerness, your black/brownness, and all the various intersections of your identity in comic books, here are a few more examples:

The Wicked and The Divine by Kieron Gillen, Jamie McKelvie, Matt Wilson and Clayton Cowles

“Every ninety years, twelve gods incarnate as humans. They are loved. They are hated. In two years, they are dead. The team behind critical tongue-attractors like Young Avengers and PHONOGRAM reunite to create a world where gods are the ultimate pop stars and pop stars are the ultimate gods. But remember: just because you’re immortal, doesn’t mean you’re going to live forever.”

Because Black Girl Nerds loves it and we would never steer you wrong?

Seriously though, WicDiv is a tour de force of style, plot twists and pop culture commentary that come from one of my favorite creative comic teams. Dealing with divine characters revered as celebrities allows for a liberal creativity in the portrayal of gender and sexuality. Not only do the gods’ gender identities, gender presentations, and sexual desires expand across the wide range of their associated spectrums, but all these identities are given equal amounts of prominence and importance in the plot – both for their fictional fans in the story, and their real-life fans out here. In case you discount nonhuman beings as adequate representation, there are plenty of queer and trans people of color that serve as main characters, such as god groupie Laura and investigative journalist Cassandra.

It’s great to see these various identities exist together in a story, and it’s an added bonus that the story itself is so interesting. The seemingly frivolous world of the gods hides dangerous secrets, and the first arc’s big mystery is laced with enough diverse mythological characters and imaginatively depicted magic that readers are kept on the edge of their seats from the very beginning. Gillen and McKelvie are in their creative element with this book, so all their humor, their classic narrative tropes (they really like pop culture references, I can’t stress that enough), and their wonderfully tight plot shine brightly throughout and result in some truly shocking endings.

It’s been out for a few years now, and comes highly recommended from within the industry so, unless you have a longstanding feud with Gillen after what he did at the end of Journey into Mystery, there really is no reason to not have read this by now. Especially since American Gods is about to wrap up its first season, it’s time to get on the winning team and find a new fix for all your god-related shenanigans.

“Hel hath a new fury! She was stolen from Asgard, exiled from Heven, and robbed of her greatest companion – now Angela plunges into the blackest depths to save Sera. But once there, the lost princess will claim a throne of her very own. To rescue her beloved, Angela must conquer this domain and rewrite laws as old as death! All hail Angela, the new Queen of Hel? Not if the old Queen, Hela, has anything to say about it. When Angela and Sera come face-to-face at last, will their reunion be joyous – or tempestuous? Who else will join this rebellion in the underworld?”

The storylines about the lost royal sister of Asgard bring together all the best parts of the Thor series: captivating artwork, otherworldly intrigue, intricate mythologies spanning centuries and many delightful instances of powerful magical beings interacting with the everyday people of Earth and all their strange humanity. There are several other books in which Angela appears that should be included in your queer reading lists – Thor and Loki: The Tenth Realm, Angela: Angel’s Assassin and 1602 Witchfinder Angela – but I want to especially recommend the last great Angela story, Angela: Queen of Hel.

What makes this story particularly wonderful is Sera. She is a dark-skinned trans woman who, over the course of this arc, is essentially brought back from the dead by her lover. Her rescue is the central conflict to solve, and thus her survival is the most important motivator and catalyst for the plot. And, when Sera is finally reunited with Angela, their interaction culminates in a scene that solidifies the passionate and loving relationship between them. This turn of events is a monumental subversion of typical mainstream trans stories that still, in 2017, more often than not end in heartache and death.

Yet at the same time, Sera is more than just a damsel in distress in Queen of Hel. Just like Angela, she can wield mystical powers unimaginable, and ultimately uses her power to protect her rescue team against the evil forces of Hel and send herself back into the world of the living unscratched. There is a duality of strength and vulnerability that makes Sera whole, a strong character in her own right and an equal queen at Angela’s side. Coupled with her charming characterization and overwhelming optimism in a sometimes bleak corner of Marvel’s universe, it goes without saying that Sera is a revolutionary character who will steal the hearts of readers just as quickly as she did with Angela.

“At last! Everyone’s favorite no-nonsense powerhouse, America Chavez, gets her own series! America has always been incontestably awesome, and as the newly appointed leader of the Ultimates, she’s now officially claimed her place as the preeminent butt-kicker of the Marvel Universe! But while leading a team of heroes and punching out big bads is great and all, it doesn’t really leave much time for self-discovery… so what’s a super-powered teenager do when she’s looking for a little fulfillment? She goes to college!”

There really are so many reasons to recommend this comic book series, so I’m gonna name them all: America continues the story of the titular lesbian Latina character America Chavez, popularly known from Volume 2 of the fantastic queer and diverse superteen book series Young Avengers. Gabby Rivera, the queer Latina author of Juliet Takes a Breath, was hired to bring her unique experiences and sharp quips to this long-awaited series debut. Quinones brings his artistic abilities right to the table with some of the most visually gorgeous work I’ve seen from him (I mean, look at the covers alone). And, while being a solo storyline, the book is chalk full of Marvel fan favorites and legacy characters who further help color America’s world with positive queer and black/brown interactions, such as black bisexual genius Prodigy and Marvel staple, Storm in all her black girl magic.

We haven’t even gotten to the plot yet! Despite existing in the Marvel universe for a few years now, America’s backstory and superheroine origins have not been fully explored until recently. Gillen and McKelvie put in work during their Young Avengers run, at the end of the series giving America a heartbreaking origin story as the daughter of two superheroines who sacrificed their lives to save her and their matriarchal alternative universe. Rivera now brings this background to a more modern forefront as she explores America’s new life on this Earth through some clever identity politics, lessons on self-love and a palpable narrative air of respect and affection for the title’s main character. So far it’s been one of the comic book stories that queer characters in general, but especially queer characters of color, have long desired and deserved.

Besides, Black Girl Nerds loves it and accurately identified it as a major win for queer nerds of color. And as I said, we have excellent taste.

In the end, I hope this list – incomplete as it most assuredly is – serves as a great starter pack of stories to comfort you during our current strange times.

Feel free to drop us a line and share your own queer comic favorites, whether they be recommendations of other people’s indie work or promotions of your own. Let’s take the rest of this month to celebrate ourselves and our wonderful community. Let’s show how invested we are in our representation, and let’s praise the comics and creators that are doing so right by us so far.

Happy Pride Month y’all! Here’s to many, many more.

Paige Allen is an avid consumer of comic books, novels, films and television shows. Unfortunately, this means that in her spare time she is trying to climb the mountain of advanced reader copies, new series and recently released movies that she has accumulated in the last few… months? Months seems accurate. She is also a fantastic baker, and she uses her skills to lure unsuspecting victims to her long rants on feminism and heteronormativity. She particularly enjoys double fudge brownies.