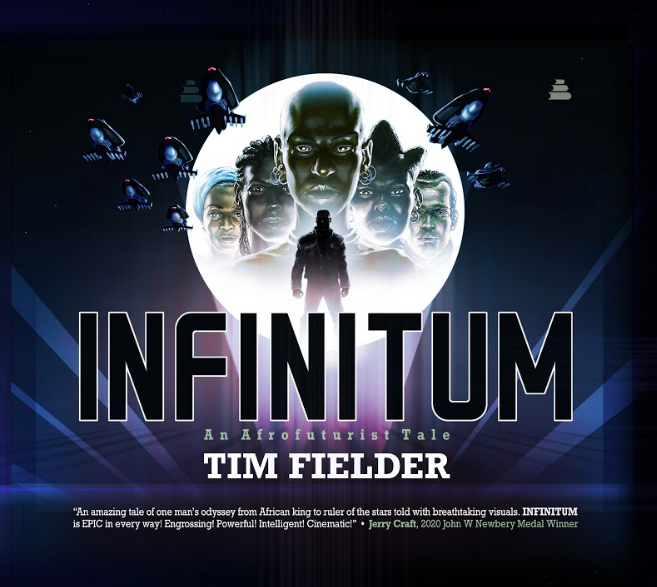 The folks at DieselFunk Studios offer up Infinitum by renowned Afrofuturist, Tim Fielder (Matty’s Rocket, Black Metropolis). Throughout the literature of the earliest times, there is the acknowledgment of people living centuries. The Bible indicates that Methuselah lived 969 years. Fielder expands on this as he moves his protagonist, Aja Oba, on a journey through all time.

In keeping with Yoruba mythology, Aja, the wild wind, can take one on a journey to the land of the dead or to heaven. Aja Oba starts his life as a great leader, who like many monarchs marries a neighboring queen to merge kingdoms. While this marriage doesn’t start with love, it evolves. Oba’s original intended, a sorceress named Obirin Aje (which if keeping with Yoruban tradition seems a bit redundant as both mean witch — but what’s in a name) bears him a son. His marriage does not bear a child, so his offspring with the Obirin witch was seized to provide Oba an heir.

Obirin curses Oba to see his loved ones wither to dust. The wild wind that follows is a journey to and through lands and even planets in the heavens that at times sink or wallow in the land of the dead. Oba sees the rise of an empire that rivals that of Shaka Zulu and a very similar and unglorious fall of said empire, colonial slavery in Africa, the Middle Passage, slavery in America, and other moments in African-American history including, the modern age. Within each age is a love and with that love the curse. Then it moves into what is and could be.

From the modern age, the epic proves why the subtitle includes Afrofuturist in it. While there are others who focus on that aspect of the title, it seems a simplistic characterization for this work. BGN asked Fielder about the Afrofuturistic label given the anthropologic story elements. Fielder explained, “I can only speak for myself, perhaps. But it appears that Afrofuturists don’t have the privilege to just project and forecast in the future. So much of our past has been ripped away, erased, destroyed and ‘disappeared,’ that we oftentimes have to fill in missing anthropological facts through speculative fiction. This is while also simultaneously reconciling our present existence while powering through to forecast the future of people of color. A complex dance no doubt, but one that I came to peace with long ago.” Even without words on many pages, Fielder’s artistry allows the title to dance through the ages. Each page explores the collection of Oba’s potential and seeing that potential abused and spent, reassembled and applied in new ways.

The publisher identifies Infinitum as a graphic novel, and released it as a six by eight inch hardbound book, but this label, like the Afrofuturist one, is too simple and belies the artistry of the work when taken as a whole. When questioned on the format, Fielder indicated that Infinitum “was designed to fulfill my desire to do a fully digitally painted graphic novel, but I also wanted to be able to finish it. It would have taken forever to use a standard format. So my solution was to do the biggest baddest Black graphic novel, picture book, storyboard hybrid I could. I wanted something that folks would feel proud to have on their coffee table.”

Some unique aspects of his approach include the mostly absent use of frames and speech bubbles. Like a fairy tale, there are summary pages that move Oba through each era, with each page a beautiful painting in and of itself. As a fan of painted comics, especially a lot of J.G. Jones’s work, including Strange Fruit, to me Infinitum takes the cake. It’s just not a gripping story, it is hauntingly beautiful from the pre-colonial age to what bookends the end of existence. It is easy to see those viewing it as more of a compilation of paintings and therefore possibly wanting to frame some of the individual pages, but it would be a shame to destroy such a beautifully bound work. Maybe Dieselfunk will market some of the pages as posters, hint, hint.

But if there is a weakness with the work, it is the minimal text component, making classifying this as a graphic “novel” a bit of a stretch. In some ages, especially the future ones, there are compelling circumstances and new loves that scream for more than a beautiful wordless page of explanation. When questioned about exploring some of these instances in maybe a limited series, Fielder artfully never really answered. But he did give one of the best reasons for picking up this work.

Fielder said, “I have been at this a very long time — as far back to when the world was not open to visual depictions of Black people in science fiction. Black men were being killed consistently in speculative films; Black women were not present at all. We have been the sidekicks and sacrificial lambs. That is a trauma that all people of color have had to carry. Thusly, Infinitum was the impossible attempt to engage as many aspects of Black life within a dramatic speculative situation. As a result, this was why the idea of immortality was used. I pray it worked.”

For all who are thinking about it, or want to be but look down their nose at “comic books,” Infinitum is an exploration of cultural awareness of known past, lived current, and predicted. The graphic novel is published by Harper Collins and is available on the Dieselfunk website as well as other online booksellers including Apple, Amazon, Books-A-Million, and GooglePlay.