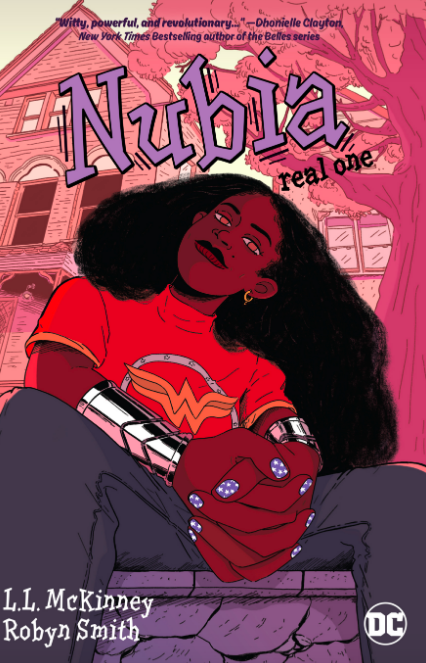 Over the last few years, both of the major comic publishers have started or restarted imprints that focus on young adults. In previous years the DC Wonder Comics imprint offered Naomi written by Brian Michael Bendis and David Walker. Starting in 2019, under the DC Graphic Novels for Young Adults imprint comes Nubia: Real One written by L.L. McKinney (A Blade So Black trilogy) and illustrated by artist Robyn Smith. McKinney brings the DC Universe’s Earth One canon regarding Nubia into the 21st century. The one-shot follows a Black teenager’s journey through some of the normal trials of growing up today. While most of her trials are typical coming-of-age issues, there is the added chore of managing the responsibility that comes with her super-hero level abilities.

Smith primarily uses a color pallet that elicits the colors of the bisexual and genderfluid flags to capture Nubia’s journey, which goes beyond her gender and sexual identity to who she is at her core. McKinney chooses to tackle just about every issue our children face in around 200 pages. With artistry, she tackles the modern-day issues of sexual, gender, and racial identity in the most challenging arena of all time, high school. Nubia’s nature pushes her to protect her friends, and, given her abilities, this often results in some superhuman displays, which cause issues at home. Nubia’s mothers fear the revelation that her abilities will bring undue attention, so there is this constant push and pull regarding helping her maneuver how and when it is appropriate for her to use them.

There is an Ecclesiastical idea about there being a right time and place for everything. One question that arises about this work is whether this is the right place to cover so many extremely nuanced issues in a rather square wave fashion (no apologies for the math reference, look it up) given the target audience. In the course of pursuing or being pursued by her bae, Nubia L’Shae Johnson has to deal with sexism, racism, police harassment, teen drinking, lying to your parents, and an attempted sexual assault that results in a school shooting. In order to make this work, McKinney, hopefully unconsciously, with the exception of Wonder Woman, represents every white person as either a racist or sexist, and Nubia’s adversary is both of those and most of the other stereotypes heaped on white people. Given today’s events and social issues, there is strong evidence of how these issues pervade our lives as people of color — just ask Black Twitter. The messages of our past and present leaders of the civil rights movements are to not lose ourselves in the pain of the wrongs by grouping a whole community into the label of foe.

Throughout 2020, we have seen an unprecedented, but not new, representation of our allies of all races in the streets with us protesting the systemic racism in law enforcement and beyond. In recent weeks, we have also seen what it happens when propaganda replaces facts, justifies the use of violence for faked slights and downplays the power of forgiving and being forgiven. This story would be a little more real if it allowed a look at the complexity in our friends as well as our foes. The evolution of Wonder Woman’s character has maneuvered her into a beacon of truth and inclusion, not just for those she likes. There is a place for her twin sister to represent these issues as well. McKinney’s work definitely supports inclusion for our friends, but the subtle message of exclusion is one that has pervaded comics from the beginning. To avoid the sins of the past we have to be careful to not repeat what was done to us. To that end, this is a title that should be read with an awareness of the slippery slope of painting any group or community of people as a monolith.

Nubia: Real One will be available in your local comic shops on February 23.