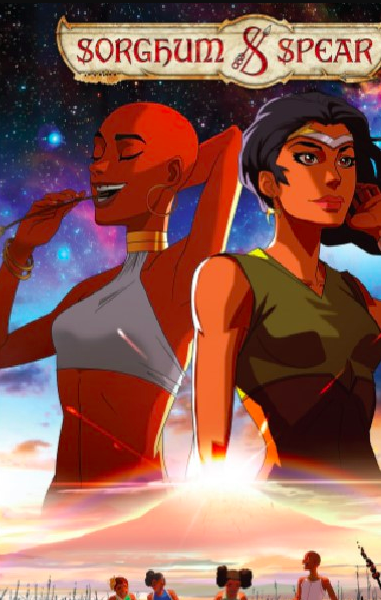 In March 2017, the creative team of Dedren Snead and Timothy Geathers initiated a Kickstarter campaign that introduces a universe where the All-Mother Eshe has shepherded the An’Fre people in the world of Tal’Jazar, known as the Eternal Realm.  As with all realms, all good things must end as a dark force enters.  In Sorghum and Spear: Simidan, the girls in the village of Marduri on the Forbidden Mountain of Juleh—prepare for the Festival of Simidan, which celebrates the great sorghum harvest. It also serves as a coming of age as the young girls get to choose whether they stay in the village or go down into the world.

The story provides an introduction into the backstory of Namazzi, one of the heroines of the Eternal Realm.  In one last act of youth, Namazzi and her best friend Kett explore the Forbidden Mountain. From the relationship with an older sister to a possible evolvement of a relationship with a friend from the village, Sorghum and Spear: Simidan, is about facing the different opportunities placed in your path.  I picked up this title cold, without the knowledge that the associated Kickstarter and website provide, which I believe put me at a loss for the richness of the Sword and Spear universe. Having said that, although I did not recognize the significance of some of the story, my disadvantage did not affect my enjoyment of the title.

There are a lot of titles that have used the African milieu as the foundation for their universes.  In the Marvel Universe, of course, we have Wakanda that has been recently adapted cinematically by Ryan Coogler and via comic books by Ta-Nehisi Coates. This has encouraged a whole new generation to actually look at a map of the continent of Africa looking for the fictional kingdom, originated by Stan Lee.  In the DC Universe, the last expedition to Africa of any consequence I can think of was with the first 14 issues of Batwing written by Judd Winich back in 2011.  Other publishers and Kickstarter campaigns have put forward other titles many of which BGN has reviewed, but what separates, this title from those?

This one emphasizes the huge role that women play in the development and nurturing of our youth.  Strangely enough, I missed that there were no men in the first issue at all.  Maybe, if I had paid a little more attention at the beginning, which provides the origin of the daughters of the All-Mother Eshe, I would have recognized the absence is likely intentional.  Note that I am not mad at that, but I do find it curious.  The village of Marduri at the edge of the mystical forbidden Mount Juleh, not filled with warriors (this is not Wonder Woman) or men, but full of the An’Fre, a spiritual people choosing to honor their traditions.  This village protects the more peaceful ways of the All-Mother with its focus on the cultivation of sorghum while another village honors the All-Mother by raising its spears in preparation to engage the oncoming challenge from demons through the Light Gate. 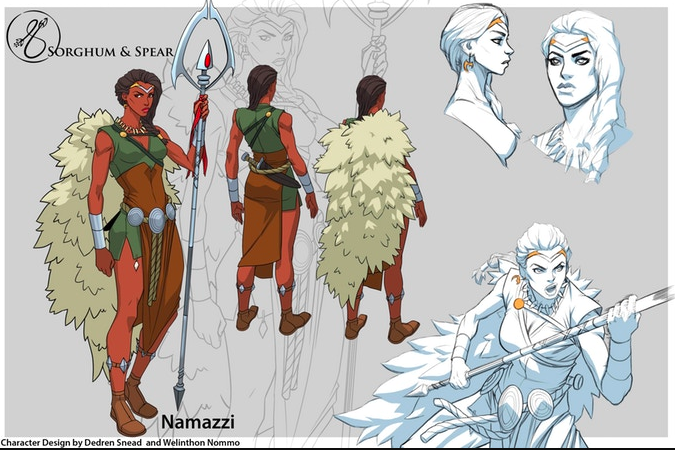 Geathers, as the lead artist, has established a great team where each panel immerses the reader in a world colored with a strong, bright perfect-for-cartoons pallet.  The warm colors perfectly mesh with the playful storytelling.  I will say, that I was a little distracted with some of the vernacular of the An’Fre infused throughout the story.  While I like the indoctrination into the community, at times I felt like I needed the “Dictionary of the Eternal Realm,” to fully understand what was going on, which is why I enthusiastically read it a couple of times. There is a gentle approach to a budding intimate relationship in this story, which is only a few frames and approached in a very innocent fashion, but it might be a little more than what some might want for their children.  Therefore, I recommend that this may not be a suitable issue for pre-teens and younger.  Or conversely, this may be a good opportunity to approach the subject with your child who may be searching to find a genteel portrayal of their own feelings.

Regardless, this refined treatment of the routine, everyday challenges of life, combined with the extraordinary invasion of bad forces establishes an interesting foundation for Snead/Geathers Eternal Realm. In addition as part of the Kickstarter campaign, there is a civic-mindedness to the community that Snead/Geathers has created around their universe.  This is accomplished, in part, through the different tiers of the Kickstarter, which included interaction with Sword and Spear cosplayers, and in the upper tiers rewards of jewelry supporting the not-for-profit organization Project Have Hope.  The campaign also envisions supporting a positive representation of the associated community through establishing a framework to support an animated series.

Sorghum and Spear: Simidan is just like the grass sorghum.  Due to its heartiness, the species are the primary food crop for those in arid climates, being used to make bread or even molasses, while in other places this strong growing grass may be considered invasive.  In its own way, this book serves as a source of manna for the beginning of the Eternal Realm and endures to bring forth an engaging journey of discovery for several young girls as they find their way through the every day and the extraordinary all, unfortunately, or fortunately at the same time.  Although a little pricey at $10.00, if you have some time, let your philanthropic side prevail and decide that this is a journey that you should take with them.