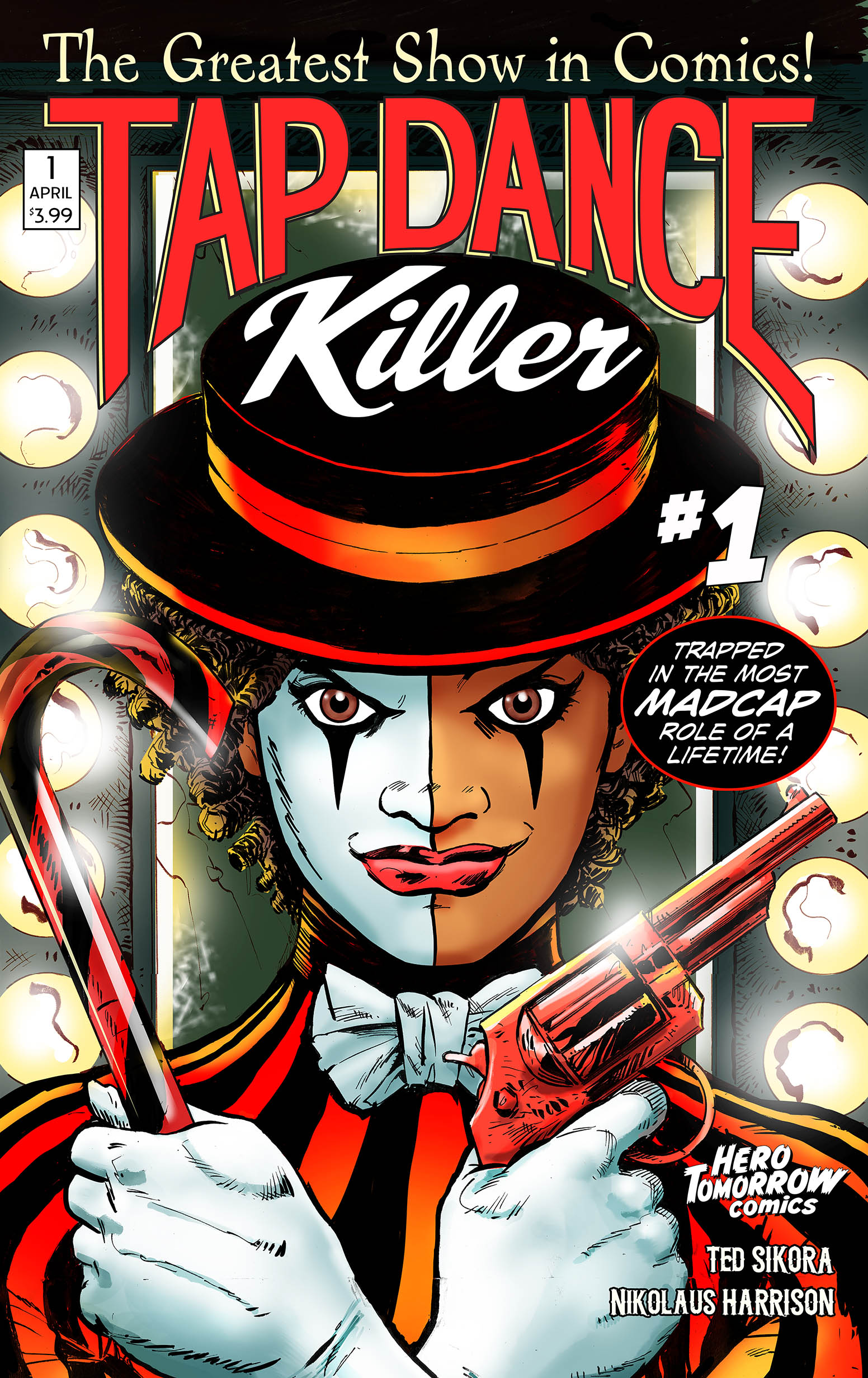 Originally released in April 2018 by Hero Tomorrow Comics, Tap Dance Killer follows actress Nikki St. Clair after her escape from prison, where she was serving time for the murder of a mob boss. No, she was not framed…well, sort of.  She did, along with her crew, kill a man.  But to be honest, I’m not entirely sure why.  More interesting, it is obvious that someone else is pulling the strings, but it is not apparent exactly who or why.  Although the character and her crew premiered in another series, Apama: The Undiscovered Animal, the writer, Ted Sikora, has provided just enough of a tease about her origins, so you get the idea that all is not what it appears.  While wholly unsatisfying, Sikora indicates that “the overarching mystery [regarding Nikki] will unfold as the series moves forward.” 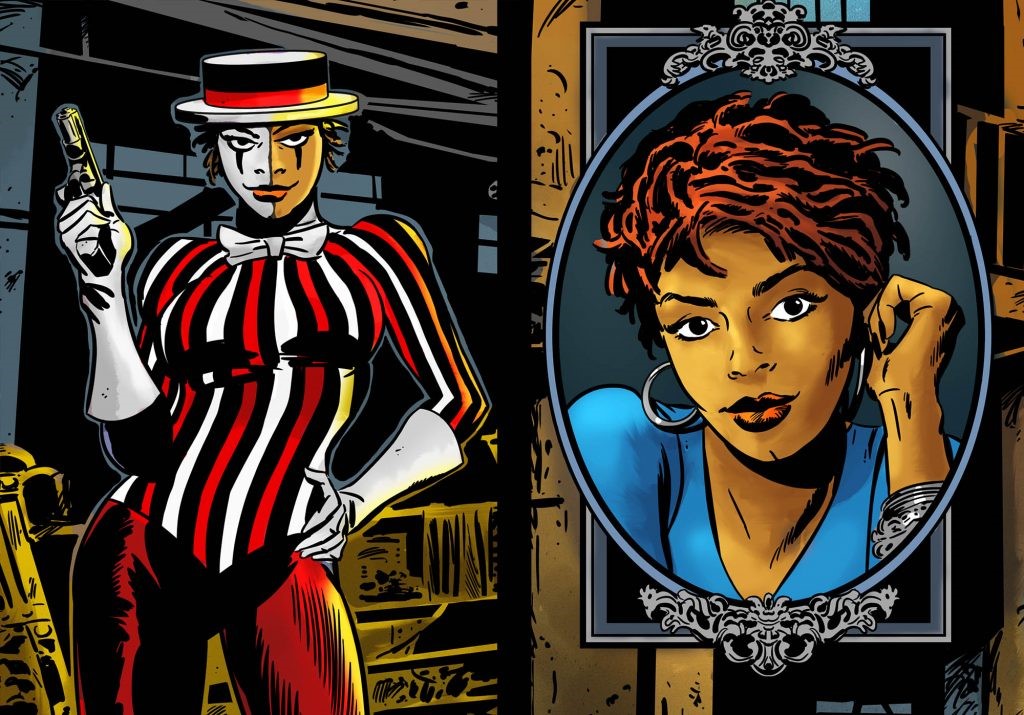 The first issue introduces her friendships and relationships while she is on the lam.  As the story continues, just imagine the relationship between Jack Napier (the Joker) and Harleen Frances Quinzel (Harley Quinn), if Harley had been the villain and as a result of her nefarious crew’s actions, creates the Joker.  The second issue delves into them as a couple.  In the first issue, it appeared that Nikki did not seem to voluntarily enter the life, but doesn’t seem torn by that.  However, it appears her boyfriend went willingly. These differing choices seem to have the odds.

In our interview, Sikora confirmed that “they’re coming from wildly different places, and they’re just getting to know each other. Nikki’s going through some severe personality stuff. She’s a mega-talented actress that has had her acting abilities enhanced and multiplied. So when she takes on a role or a disguise, it messes with her head. Drayton, on the other hand, has been wronged by the system, and he’s out for simple sweet revenge.”

Overall Nikolaus Harrison’s artwork, harkens back to the Bronze Age comic artists, where comics were transitioning from less cartoony imagery to more realistic. But it’s not anywhere near the style today with real attention to light and shadow in the sketches and inking.  However, the coloring by David Baf Gallart and Sikora, update it just enough to give it the depth that is seen with current age coloring.  The use of both age styles helps the title as the idea of the Tap Dance Killer harkens back to another time. In some folks’ minds, a simpler one. I read someplace that vaudeville’s use of ethnic stereotypes was some kind of exploration of America’s psyche during the turn of the 20th century.

For African Americans, that “exploration” included the use of blackface and the propagation of the watermelon eating, tap dancing, fool.  Later, African Americans used the form to promote their talents in a more representative way, by reaching the community around the country on what was known as the “Chitlin Circuit.”

This aspect of the title haunted me a little in the first issue. It seemed to jump to the front of my mind with the introduction of Punchline, a Black man dressed up like Bozo the Clown. This perception was reinforced at the end of the first issue, as there is a page that goes through the origins of the Tap Dance Killer. As originally imagined, the Tap Dance Killer, was White, red-haired, barbershop quintet-looking character. This character has evolved through song, film, and another comic title. Over time, they finally settled on the character of Nikki St. Clair.

When questioned about the morphology Sikora revealed that “[b]ack in the early 90s, I wrote the principle music and story to a rock concept album titled Nothing Like Vaudeville. The tagline was ‘Somewhere in the 1920s a runaway ‘freak’ clashed with bizarre mob violence and a diabolical ringmaster.’ “Tap Dance Killer” was one of the songs. I made a character concept illustration that reflected the look of our band (which was comprised of five White guys). In 1994, we decided to turn the rock album into a two-act musical play with over twenty people in the cast.

It made sense to reimagine some of the characters, and Tap Dance Killer was cast as a White female. The show was put on hold for several years, during which time I became devastatingly smitten with the voice of Sarah Vaughan. I wondered if there was someone with Sarah’s sass and brass that could perform the “Tap Dance Killer” tune. In 1998 I reached out to jazz vocalist Ki Allen to sing a demo, and she absolutely killed it. From that moment forward, I loved the idea of a Black woman portraying the character…She’s named after Cleveland’s St. Clair Avenue.”

Over the last two decades, there has been this move to the tortured plight of the anti-hero. Tap Dance Killer seems not to be directly exploring that meme but a slight derivation. What happens if a regular person, not really predisposed to malevolence, finds themselves in the midst of it – and sort of revels in it? It seems that Sikora has started a ride to find out.

There is some imagery that may be a bit problematic, but it appears the writer’s intent comes at it from an appreciation of the artistic nature of vaudeville without the baggage of the social issues vaudeville thrived on and the stereotypes it promoted.  Regardless, with all that I don’t know nor understand after reading the first two issues, it was an enjoyable ride. This title may not be for everyone’s sensibilities, but it artfully captures an evolution of a character from an idea to a song, to a character in a film, to a comic book personality. 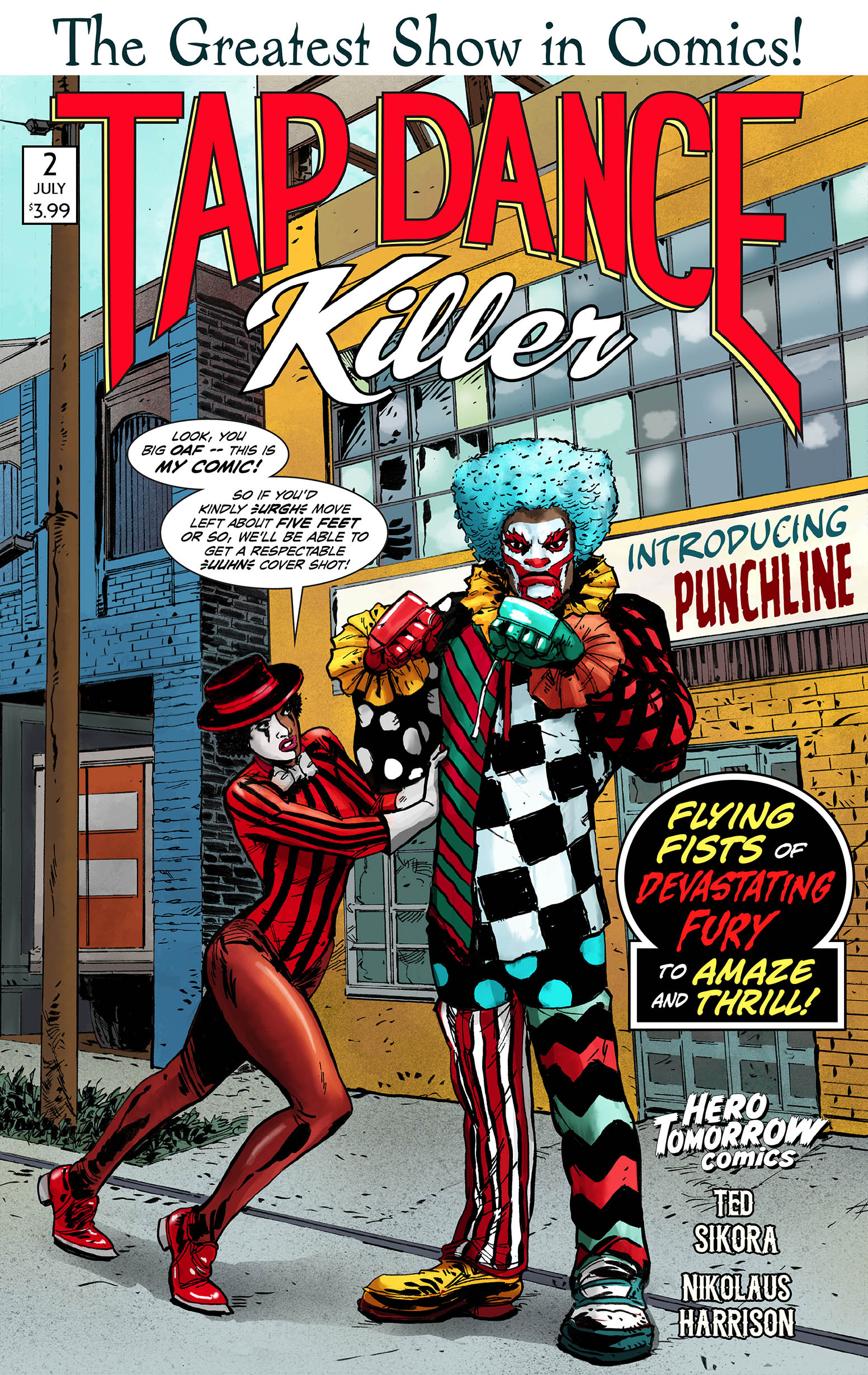 Sikora, uses his creation, the Tap Dance Killer, to take the reader on an interesting journey with a villainous actor with excellent dance skills.  While Nikki wears clown-ish makeup, Sikora revealed that he doesn’t “think of Tap Dance Killer as a clown, but more of a mashup of a vaudeville stage actor with equal parts mime, Chaplin, Fosse, and mobster mixed in.”  So, if you suffer from coulrophobia – a fear of clowns- do you and avoid this one, but for those of you who enjoy indie books that trend away from tights-focused stories and more towards comic book “realism,” this title may be for you.

Tap Dance Killer is published by Sikora’s Hero Tomorrow Comics and Issue 1 hit stores in April of this year. Issue 2 came out nationally July 10th, so stop in and check it out.  They are also available online through Amazon and at Hero Tomorrow Comics.

Interview: Ted Sikora Brings Us Nikki and the Vaude-Villains