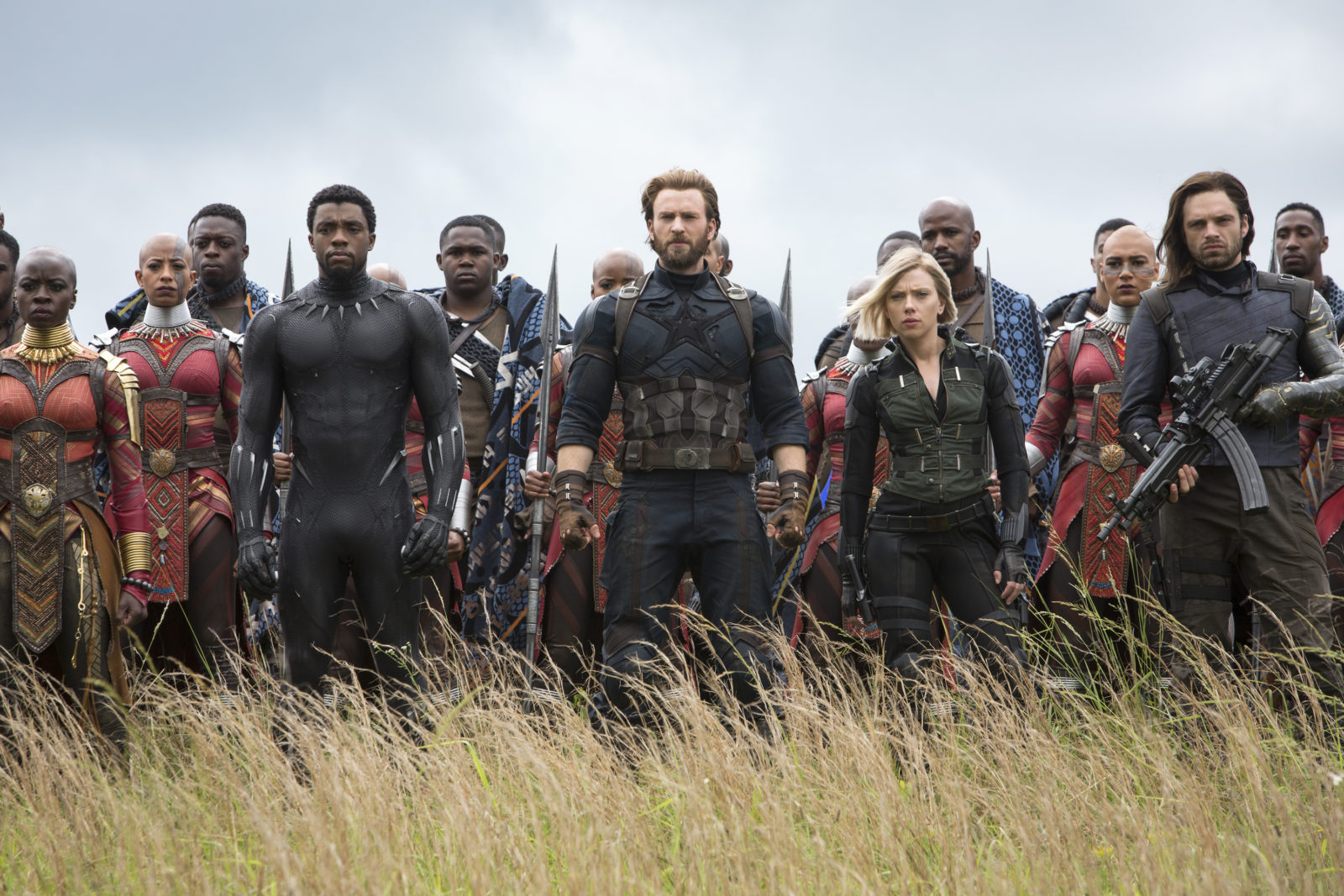 From the first Ironman film to Black Panther, the MCU has been keeping us entertained while commenting on the many horrors of war. It’s just like Edwin Starr sang, “War! Huhhn! Good God y’all. What is it good for? Absolutely nothin’! Say it again!”

Avengers: Infinity War takes up that battle cry, if you will. The directors Anthony and Joe Russo, the cast, and every single arm of that Marvel dream machine put their all into making possibly the best film to come out of the MCU. I say possibly because many of the previous films have shined in ways that make a battle for first place sometimes hard to call. But, given the deft, the impressive utilization, and direction of one of the biggest ensemble casts maybe ever (I’d have to re-watch some of Cecil B’s films to be sure), it is not an exaggeration to say that this Avengers movie is truly epic.

It is hard to go into any detail about the plot without giving something away. Everyone knows, the band is back together, and the neighbors have been invited to the barbecue. The uber-bad guy—Thanos–is finally doing what he’d only sent minions to do before: get the six Infinity Stones. He has a plan for how he’s going to use them.  No, I’m not telling what it is. Suffice to say, it is not good, and our heroes are finally all on the same page, same mission. Thanos must be stopped.

This all sounds pretty familiar and typical for your standard superhero movie, but don’t let the plot fool you. As I said before, the film is deep. Really deep. Because it is not just about the battles, the weapons, or the heroics. Infinity War looks at what war is really all about: love and sacrifice. Think about it. The love of family, friends, and country are always front and center in war. The sacrifice of ideals, possessions, and, especially, life is a necessary part of war.

And that brings us to Thanos.

Thanos is really what sets Infinity War apart. The MCU doesn’t skimp on complex character exploration, including in its villains. Probably the best of these, Killmonger, was seen in Black Panther. But Thanos may make it a tie for the most, well, if not likable, then almost understandable, a villain in the MCU. Like Killmonger, Thanos has a complicated backstory. His motivations are driven by a twisted logic you can almost think reasonable. He possesses a quiet manner that lulls you into listening, despite the undercurrent of menace, much like, say, Don Vito Corleone.

Josh Brolin’s Thanos may be the thing that really pulls the film together. The nuances of his performance behind his digital “mask” and his vocal performance are award-worthy. Thanos ultimately is a combination of Brolin’s acting, the Russos’ directing, and an effects team that kicked all kinds of ass on this character. It is magnificent to watch.

The rest of the cast is relaxed and confident as the various superheroes.  They have obviously grown into their roles, wearing them like second skins. The genuine affection between the various cast members comes off the screen in waves. The subtle emotions expressed in their faces, voices and body language would almost be more typical of the types of performances seen in what some deem “serious” films. But this is nothing new in the MCU. One particularly arresting moment is the reunion of two of the characters that, in the hands of less talented directors, might have been mishandled and made sappy. Instead, it just took my breath away for a moment.  You’ll know it when you see it.

It is hard to name standouts because they are all fun to watch, but I’m going to single out the young ones:

~~Tom Holland made the most of his screen time as the ridiculously adorable and painfully polite Spiderman. He pulls it off so well that you just want to ruffle his hair and pinch his beardless cheeks.

~~Letitia Wright reprises her role from Black Panther, the brilliant Wakandan princess, and scientist, Shuri. On for much too short a time, she steals her first scene once again and teaches a lesson in comic timing with her on-point line delivery.

~~ Honorable mention: Vin Diesel (voice), Terry Notary (body), and the animators who made up the sullen, handheld game-obsessed teenaged Groot. Though he originally seemed doomed to be a one-joke character, he joins the other young characters in reminding the audience that, too often, young people are among those on the front lines of battle, many times wearing only their feelings of immortality as an untrustworthy shield.
It goes without saying that the Infinity War effects team outdid themselves. They make it all look so easy, you simply forget you’re are watching effects. For that, I’m eternally grateful.

Alan Silvestri’s score was perfect. It didn’t get in the way, not once, but buoyed every scene with an understated but appropriate emotional tone. Normally I would warn you to stay put until after the credits roll, but in this case, you won’t want to move anyway because of the gorgeous music washing over you during the crawl.
Avengers: Infinity War is a great superhero movie, but it is more than that. The emotional impact on the audience, the artistry, and the brilliant storytelling are so astonishingly good, that it is simply a great film. Period.