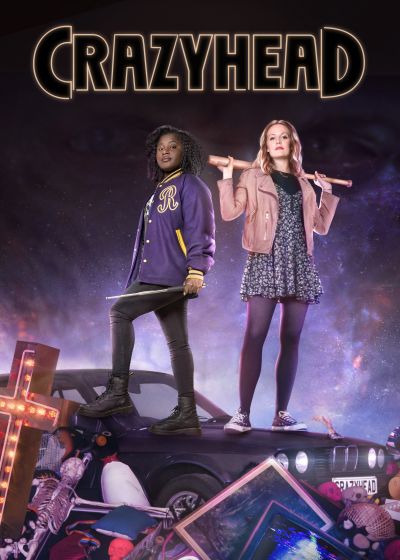 It is an understatement to say that 2016 was rough. Barely two weeks into 2017 and this year already feels like an uphill climb, the glee of Universal Fan Con crushing their funding notwithstanding.

So when reality feels too much for me, I make time for self-care. I find comfort in the usual geeky pursuits: video games, RPG days, or a time-honoured tradition during the winter months: binge-watching TV. This is how I discovered and fell in love with Crazyhead—a six-episode comedy-horror series by Misfits’ creator Howard Overman.

The series was inspired by the everyday sexism women face. A cyclist passed Overman on the street when another man catcalled her. She parked, removed her saddle, yelled back, then walked away. Overman imagined that instead of walking away, the girl confronted the man and fought back with her saddle. That instance inspired him to have not one but two kick-ass women fighting together against a common foe!

In official E4 press materials, Overman said: “I had this idea that these girls were both battling their demons in friendship and love and all the sort of messed up shit you have to deal with in life, as well as actual demons. It’s as much about their friendship as the horror genre elements, about two slightly lost girls who find each other.” 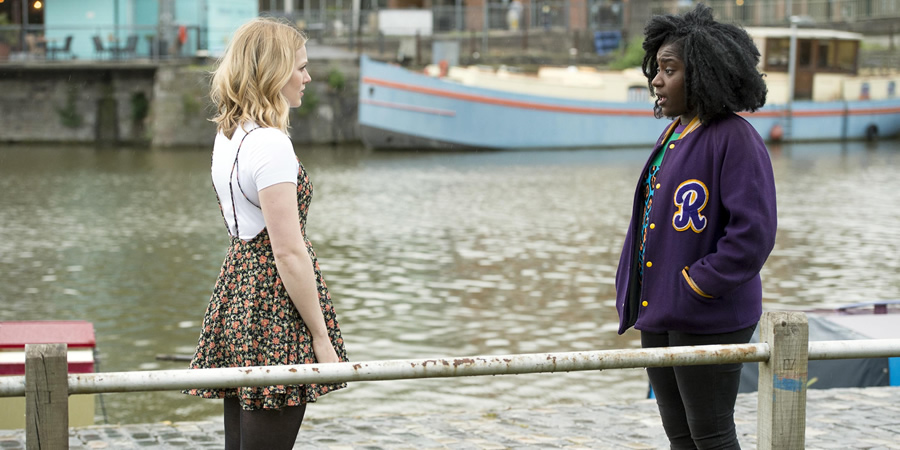 And Raquel and Amy do find each other, but explaining that now is getting ahead of myself and divulging plot twists.

It’s best to get this out of the way first: the series opens with a young woman bound and gagged, two masked figures standing over her. My eyebrow arched at the uncomfortable racial dynamic of the scene but I stuck with it (explanation to follow). In the first fifteen minutes of the show, we learn demons exist and that “seers” can detect their true hellish forms. To a seer, demons look “like they’re burning inside” with a fiery glow behind the sunken areas of the face. We also learn that, according to the internet, an exorcism starts by peeing on the possessed to mark your territory, “like a lion.” Yup, I said peeing. This was also what I meant by “explanation to follow,” but stay with me (and the show). I promise it’s worth it. 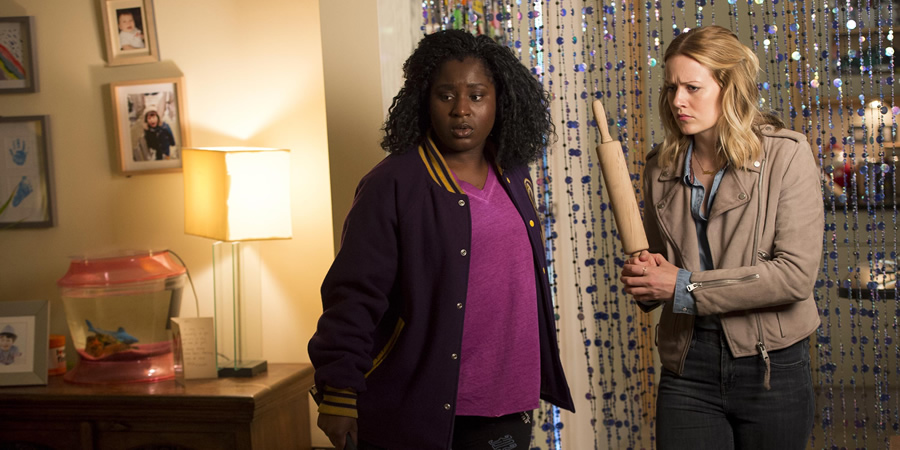 Some of you might recognize Raquel (Susan Wokoma) from her role in Chewing Gum as Tracey’s uptight older sister, Cynthia. Raquel is 180-degrees different from Cynthia. And, if you’re a British telly nerd like me, you’ll know Amy (Cara Theobold) from Downton Abbey and Tony Curran from way-too-long-of-a-list-to-share.

With no dearth of supernatural shows on the air, Crazyhead quickly distinguishes itself from the pack. There are easy comparisons to be made to Buffy and Angel, quippy girls who kick ass and all that. Props to its predecessor made, we can see that Overman took that DNA, pulled the tropes apart to subvert them, and improved the genre with even stronger women and better inclusion than shows in the Whedonverse. [cough] Where are the Asian-Americans in the Anglo-Sino Alliance? [cough] Our two protagonists don’t rock Slayer-healing or brawn: their strength is in their character and relationship, which develops organically over the six episodes.

The show hits the ground running with fast-paced storytelling rife, filthy humor, and no dearth of scary, sweet, and/or poignant scenes. Themes of sex-positivity and owning your sexuality also find their way into the story. Comedy infuses the action and horror, and our two leads deftly play off each other wonderfully with visible chemistry. The show also delves into real-life issues like insecurity, difficulties in making friends, heartbreak, loneliness, gaslighting, parental death, and even single parenting. The show does an excellent job in depicting the isolation that can occur with mental illness. While neither character explicitly has mental health problems, no one believes them when they talk about the demons they see, except for the demons themselves, that is.

Once our two leads are established, my fear was that the woman of color would be shuffled to the background in favor of the white protagonist’s journey. This has happened so many times that it’s ceased to be a surprise and can put me off media that doesn’t explicitly have POCs as main characters. I mean, we’ve all seen magical POCs, white saviors, the POC sacrifice for the greater good, and so on and so on. Happily though, I was wrong! In the first episode, Amy treats Raquel poorly, but after a chain of events, she realizes Raquel might be the only one who can help her. When they meet again, Amy can’t hide her anger and continues to take her frustrations out on Raquel. She wants information but doesn’t want to ask for help outright or validate the fact that demons might actually exist. Raquel calls her out for her behavior, holds her ground, and emphatically states, “I am a strong… a powerful black woman.” Does Amy apologize? Does Raquel help her? Is your interest piqued yet?

Raquel is one of my new favorite characters because she is unapologetically herself and wonderfully weird. She might not know the best way to speak to someone, but she’s honest and direct. It would be refreshing to see more characters like her and more actresses like Wokoma in media overall. Women of color who aren’t selected based on the colorism aspect of casting practices. Women of color who are allowed to rock the beauty of natural hair and who aren’t model-thin. Translation: women who exist in my life and in yours.

Growing up biracial, I struggled with identity, because there were so few (if any) positive Asian characters much less Asian-American ones. My role models were white like my father, and that had a stealthy effect in turning me away from wanting to explore my Filipino heritage. It took a long time to realize that lack of media representation made me ashamed of being biracial. I never saw myself on screen, or, if I did see Asians (or other POCs), they were the punchline or stereotypes. Representation isn’t an issue isn’t an issue when you see yourself everywhere, which members of marginalized communities don’t. when you see yourself everywhere, and that goes for any member of a marginalized community. The first time that you see that character who’s like you, or your sibling, or your friend… how the heart soars at that tremendous power and validation to SEE yourself finally depicted in media. While I’ve not yet encountered a plus-sized Filipina-American on screen, I hold hope that one day it’ll happen.

Raquel was not crafted to be the white girl’s sidekick and, in this universe, she has the knowledge (“found on the Internet, if you know where to look”) plus badassed demon-fighting skills with that telescopic baton (thanks, eBay)! Amy is unhappy: she just wants the hallucinations to stop and to return to her job at the bowling alley. But she ends up fighting alongside Raquel, who wants a friend, someone to understand her and what she does. Both women are flawed, authentic, blunt, socially awkward, and a little odd. As they get to know each other better, their relationship strengthens, even while outside forces seek to pull them apart.

British television has cultivated an economy of storytelling, so a lot of plot happens in six episodes, with seeds planted for another year, if given the chance. We deserve more Raquel and Amy! It bears mentioning that the show isn’t perfect; there are scenes that might make folks groan, but I don’t think anything will trigger viewers. It would be easy to relate loads of anecdotes about Crazyhead, but just watch the series for yourself to enjoy the plot unfold. Series one is available now on Netflix streaming, and I predict that folks will be crafting some Raquel cosplay soon; that St. Lucy’s varsity jacket is boss! 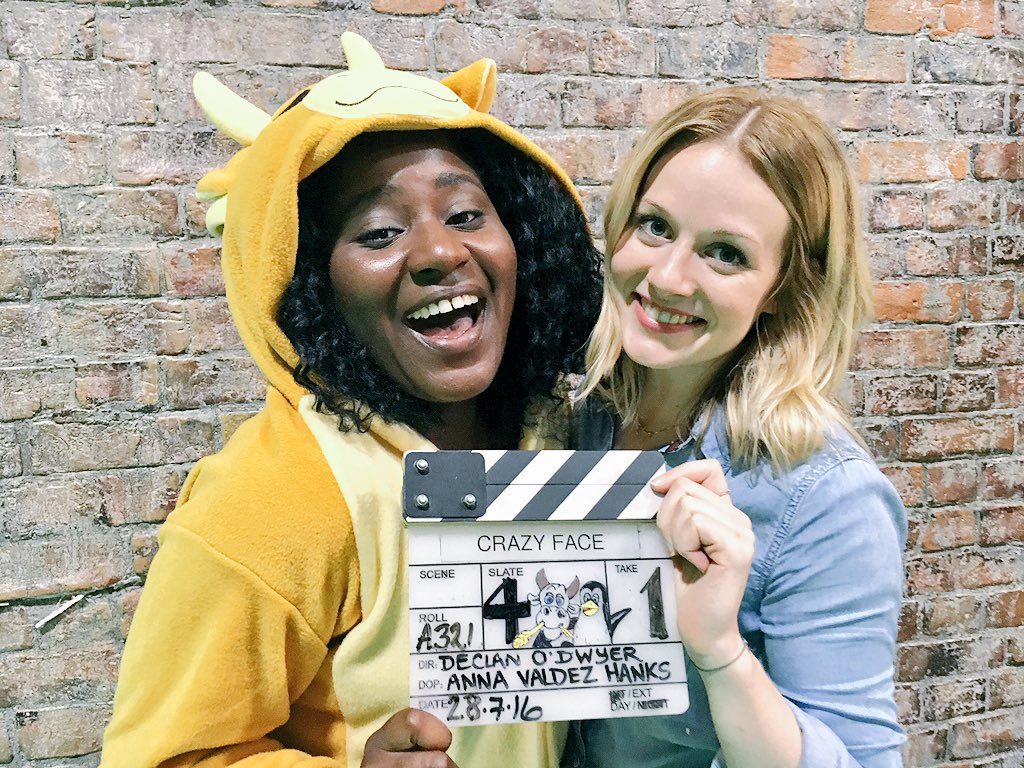 PS. To end my first piece for BGN, some out-of-context quotes:

“I should have pinched your arm.”

“Are you telling me the future of our kind hangs on whether your babysitter fancies some overtime?”

“Just because I died doesn’t mean we can’t snuggle.”

“You can’t start shooting people on a hunch!”

“As much as I’d love to hang around trading pithy insults, the gates of hell won’t open themselves.”

Kristine Hassell is a lifetime geek ISO better inclusion in media. She tweets for GeekGirlCon and enjoys 80s rap and new wave, Star Wars, and popcorn. Always ready to roll for initiative she can be found online: @GermanCityGirl!