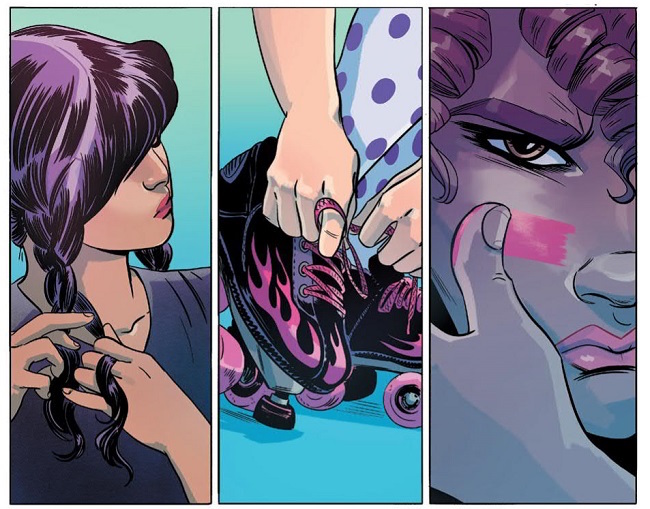 Written by Pamela Ribon with illustration by Veronica Fish and colors by Brittany Peer, SLAM! is a perfect intro into roller derby.

The book begins with the two protagonists in the bathroom. While Maisie is locked away in a stall, Jennifer is giving her best pep talk to lure her friend out so that the pair can compete as team leaders of the newbies at the Eastside Roller Girls Club. But with Maisie feeling down about potentially being a bad captain and just bad at roller derby in general, it’s up to the upbeat Jennifer to get her friend’s hopes up.

From here, we’re taken on a journey to the past where Ribon describes what was going on in the young women’s lives before signing up for the Eastside Roller Girls. Jennifer is looking to get away from her constant studying, while Maisie is trying to get over a breakup with her boyfriend of over three years.

But somehow, in the madness of their lives, they’re brought together by this hard-hitting sport that serves as the catalyst for their relationship.

Flash forward back to the current date and Jennifer has managed to coax Maisie out of the bathroom stall and onto the rink for their very first roller derby. The girls leave everything out on the floor and are later told by other members of the Eastside Roller Girls that there is a draft.

The potential of being chosen by top-tier teams makes both Maisie and Jennifer nervous, but while Jennifer’s nervousness is paired with excitement, Maisie is feeling down about her chances of making it onto one of the teams.

Unsure if they would be called up, the two get simultaneous calls and offers to join roller derby teams, however when they get placed on two rival teams the two wonder what this will mean for their friendship.

This was an excellent first issue. I enjoyed getting to know more about roller derby and delving into the lives of the two protagonists- they are both very different people, but through a common love of the sport they play, they’ve come to be best friends, even with the impending separation of new teams between them.

I’m looking forward to what Ribon will do in the upcoming issue when the friends are on the teams they were drafted by; as if things weren’t already crazy enough.
SLAM! #1 is available now, with issue #2 hitting shelves on December 21st.