The highly anticipated sequel to Ubisoft Montreal Watchdogs has arrived in Watch Dogs 2. This time around you get a more vibrant colorful city as the series transitions from cold and rainy Chicago to the sunny palm trees and tech enthusiast dense environment of San Francisco. As we enter a new city, we also get a significant shift in the main protagonist from its predecessor. While there were a few issues that were noted in the original game the one that had gamers most jaded was the flat and often lifeless character of Aiden Pearce, who’s cold, calculated dialog left much to be desired as this approach as been most often used in action game of this size. Now we have a young, likable, excitable, and fun protagonist in Marcus Holloway. Marcus who is a more down to earth character is teamed up with other well-trained hackers throughout the game, and they call themselves Dedsec. They set out to expose and take down the big tech companies overtaking the city. While each of his hacker team performs memorable experiences, it is Marcus that holds the team together to make it all work. So from the onset the many various characters you not only team up with but interact as playable characters should bring a refreshing light and well-balanced dialogue and action sequences in this 20-25 hour single mission campaign.

Watchdogs 2 in all of its gameplay, stealth, and hacking adds another important key element in its second entry which is race and gentrification. Marcus brings a long-awaited diverse touch and feels to an otherwise nondiverse industry if you are either discussing the tech behemoths he must overtake or just diversity in gaming. As an African American who has been knee-deep in gaming ever since as long as I can remember which would be the very early eighties, I have played thousands of games and have grown to love gaming as not only a hobby but as something I feel provides joy and a sense of belonging within the gaming ecosystem I interact with on a daily basis whether its friends or co-workers. So Watchdogs 2 is not the first high-profile game to feature and African-American as the main protagonist but on that delivers it so well thought out not shying away from the lack of diversity with the mock tech giants the game has you explore. One of Marcus’s friend and fellow hacker in the game who is another African American are both tasked with retrieving some vital data within one of these campuses and the not so subtle references are made in regarding the lack of other people on campus who resemble the two. Those moments allowed me to relate to Marcus in a way I have never been able to in any other game I have played before or after that point. 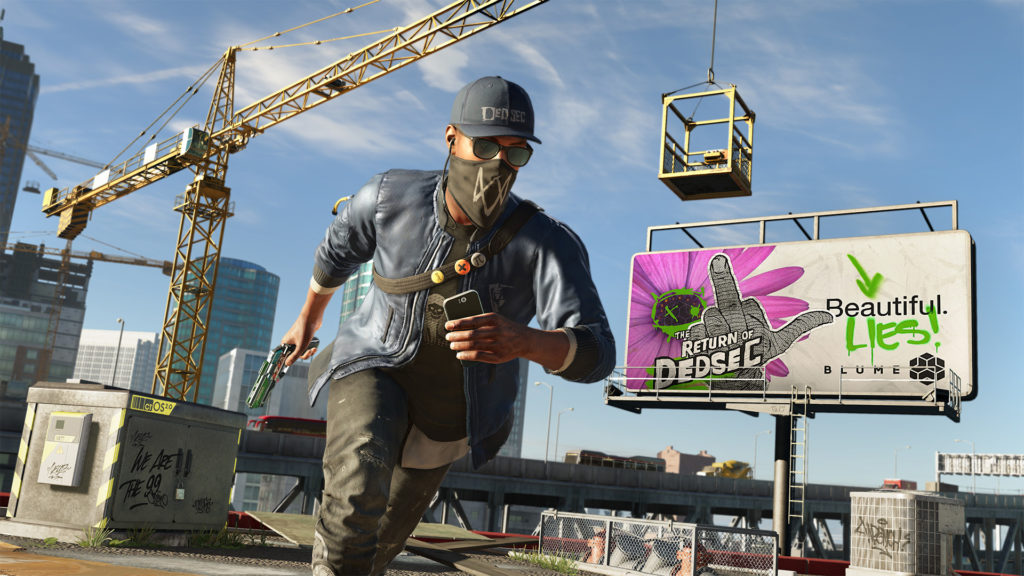 You can’t talk about Marcus’s character and the city of San Francisco without bringing up the serious gentrification issue that plagues the city. Marcus and his family were originally from San Francisco, and they along with many other middle-class workers got kicked out of their sacred living spaces to make room for residents who can afford outrageous rent increases especially if Silicon Valley is backing you up. So  Marcus’s mission is in a sense trying to level the playing field or at least expose the nasty truth along with his hacker group so that people from areas to Oakland to the comfy confines of Bernal Heights are aware of the hackers mission.

The game was a joy to experience and play. Ubisoft Montreal created a living breathing character not only in Marcus and his Dedsec group but also in the city of San Francisco. Venturing to sidewalk graffiti art sessions to exploring other hackerspace lounges to hacking large server rooms stored in the game’s version of Google, Apple, and Amazon this game has it all. What keeps me coming back to this game is how it all blends these elements together and still at the end deliver a powerful message about issues relating to our society. I’m looking forward to what Ubisoft Montreal cooks up in a third open world adventure.