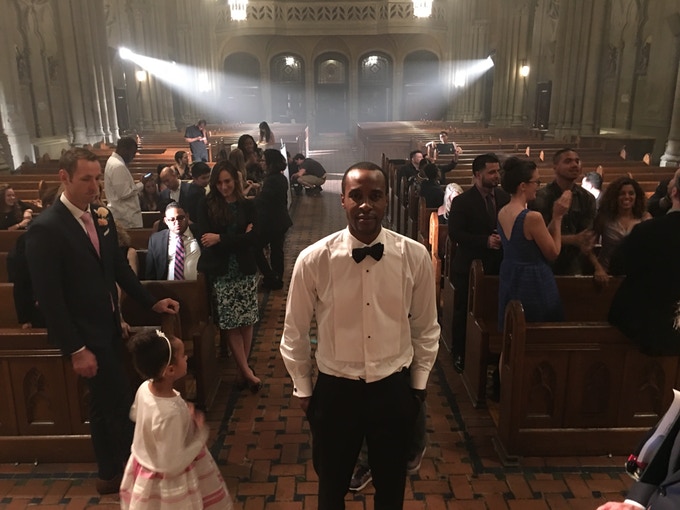 The short film Jitters debuted at the American Black Film Festival (ABFF) in Miami this month. It follows a groom, played by the director Otoja Abit, as he experiences a very long moment of doubt before his nuptials. The best man comes in to chat with him. These two men spend nearly the whole film locked in a room in the back of a church, walking down memory lane. 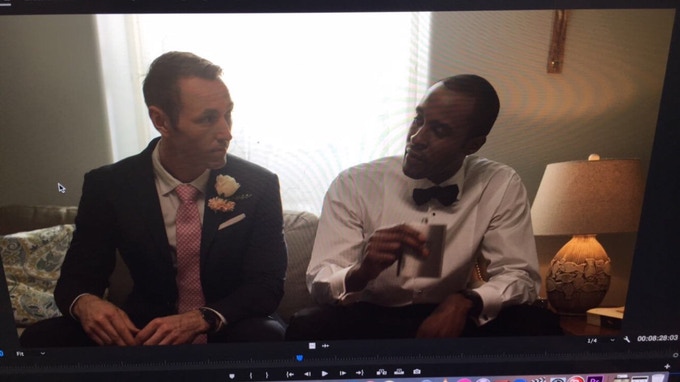 That’s what I thought too until the groom’s memories started unfolding. He had really gone through some women in his day! Each time, he was callous, unavailable or unfaithful. The women go back to his teen years, including the mysterious person he gave his virginity to as a teen. That love is the one who lingers—Sacha, expertly played by Jonny Beauchamp. Each of his love failures is bookended by a tryst with Sasha. One relationship wasn’t even over when Sacha came back around. We never get to see much of this person in Jitters, only pale skin that is flushed with sexual activity.

The best man, however, will not let this groom wallow. Played by Walker Hare, the best man seems to know all about the groom’s relationships, especially that one he held onto for so long with Sacha. They had all been failures or sources of great strife for the groom. “Trust yourself,” is the mantra we hear over and over from the best man, the groom, and in a flashback, the groom’s therapist, played by Jason Patric (Speed 2: Cruise Control,  Narc, Wayward Pines). The poor guy has been trying to reconcile with his failures for quite some time.

Abit does use the short time period with the skill of a man who knows exactly how to make a moment with few words and movements. Right away, the audience is invited into the groom’s past and tempted to judge him. We do, but it’s a trap. Abit uses our own bias against us to make a powerful statement about love and self-confidence. He forces us to see that there is no way that the groom can walk down that aisle to his mate with that much baggage on his shoulders–it must come off.  Only then can the groom really see his love (standing at the alter) and why he is worthy of being loved.

This is a side of a man before his wedding that we don’t get to see much. These stories are unusual, as they usually center the bride (and that character is usually a cis white woman). To have a man as the focus of a film dealing with the matrimonial doubt trope is intriguing. Its downright revolutionary when the narrative reveals that the groom is not a cis black man.

A groom–a black man–doubts not only his decision to marry but also a sexuality that he had been hiding all his life.  Abit takes a subject that is nearly taboo in the black community and works it in this film like baker kneading dough. He turns it over, teases out the details, and folds the narrative back to the groom, again and again until the groom and the audience are thoroughly convinced that the marriage must take place.

Jitters is a short film with a message on love and sexuality that America needs to hear right now. It also sparks a conversation that the black community needs to be having, especially in Pride month.

Review: ‘Now Apocalypse’ is Another Wild and Sexy Ride from Gregg Araki