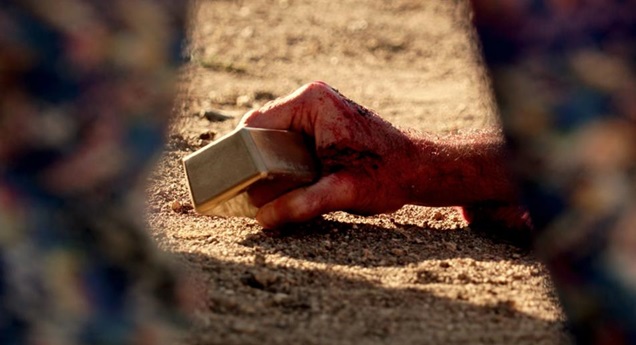 An official selection in the Midnight Madness category at the Toronto International Film Festival based on the 1971 french novel of the same name, Let the Corpses Tan is unlike anything I’ve ever seen, while having familiar elements. Written and directed by veteran duo Hélène Cattet and Bruno Forzani, Let the Corpses Tan catalogs the day a gang steals a shipment of gold bars.

On a blisteringly hot day in the Mediterranean, a gang of intrepid men flee the scene of a successful heist. While making their getaway, they cross paths with a woman, her son and sister—and from there things don’t go quite as planned. What started out as a plan executed to perfection turns into a shoot-out at the OK Corral between the men and local police. 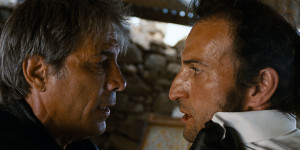 Having never seen any of Cattet and Forzani’s previous work, I had no idea what to expect, and frankly could have never predicted. What I thought was going to be a “standard” heist film turned out to be anything but. To say the imagery is ‘in your face’ would be an understatement. The close ups of the actors getaway close, to the extent there is a feeling the viewer is almost invading their personal space. Let the Corpses Tan is filled with stunning (and at times jarring) visuals, and cringe inducing sound effects.

There are strong nods to films of the bygone eras, of old school westerns. Classics such as The Good, The Bad and The Ugly, Tombstone, and concepts clearly influenced by graphic novels. 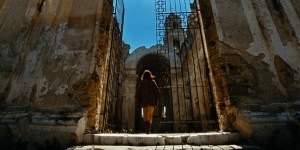 The tension between the characters is aided in the editing style, where the camera pans back and forth in a manner that almost causes the viewer to hold their breath, in anticipation of what happens next. At times the plot seems to be as meandering as the winding coastal roads that led to the hideout, the visuals almost too ‘out there’.

By managing to teeter on the fine line between interesting and absurd, Let the Corpses Tan delivers a story that teaches on the consequences of greed and perhaps lust? All-in-all, anyway you look at it, Let the Corpses Tan is a film that is neither forgettable or boring.