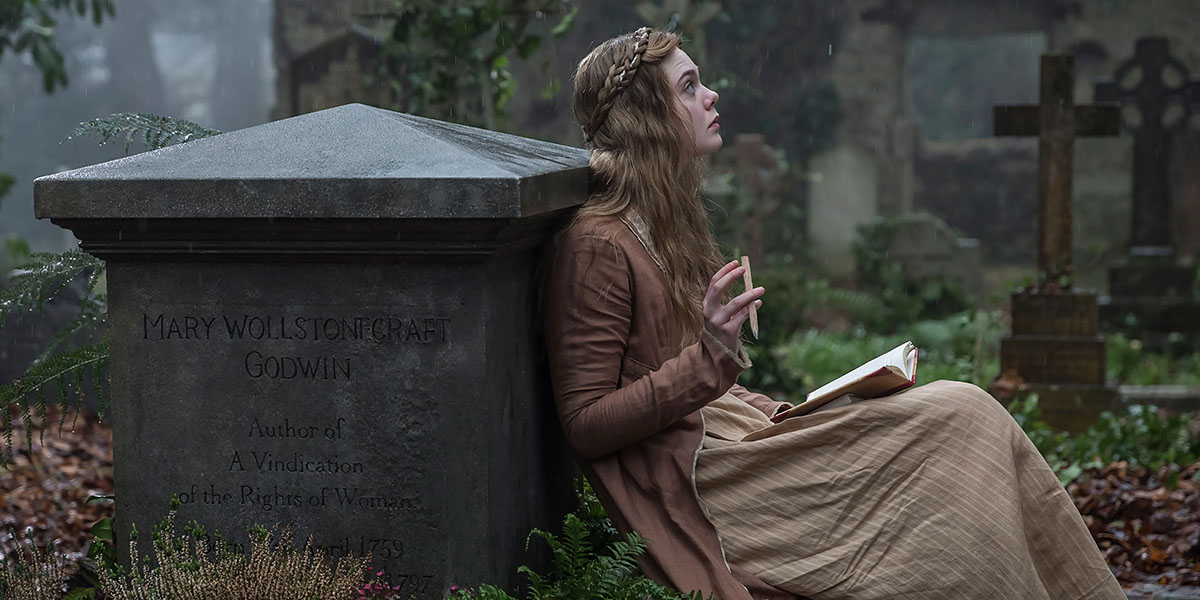 Mary Shelley (formerly titled A Storm in the Stars) tells the story of the famed titular Frankenstein author and her early relationship with poet Percy Shelley. The film is directed by Saudi filmmaker Haifaa al-Mansour and stars Elle Fanning, Douglas Booth, Bel Powley, Maisie Williams, Joanne Froggatt, and Tom Sturridge. In this biopic, we follow Mary Shelley (then known as Mary Wollestonecraft Godwin) as she falls in love with Percy and defies her father by leaving home and living with Percy while he is still technically married. It’s a story about a young girl who lived a life outside of the traditional norms and used her personal experiences of abandonment and rejection to create one of the most iconic pieces of horror literature. It’s clear throughout the film that Frankenstein embodied the same emotions Mary Shelley did throughout her young life.

Mary Shelley is an absolutely beautiful film. The Gothic aesthetic is never toned down, and while there are gorgeous shots of overgrown cemeteries, Gothic mansions, and sweeping, grayish toned landscapes, the music that accompanies the scenes is both haunting and serene. The mood is exactly what you would expect from a film set in this time, especially a film biopic about an author of horror fiction. For fans of the Gothic and Victorian aesthetic, Mary Shelley does not disappoint.

Unfortunately, most everything else does disappoint. For a biopic, Mary Shelley does a good job of focusing on just a short span of time in Mary’s life, but at times it felt the movie wasn’t going anywhere. We open the story with her as a teenager living with her father (Stephen Dillane of Game of Thrones), her stepsister Claire, and her stepmother (Joanne Froggatt of Downton Abbey), with whom she has a tense and often tumultuous relationship. This friction is caused by the fact that Mary is very much like her father and her biological mother—a feminist writer who believed in polyamory and lived an “unconventional” love life. When Mary is sent away to Scotland, she meets the overly brooding Percy Shelley who immediately takes to her.

Mary and Percy run away together with Mary’s stepsister Claire, and their fortunes take a turn for the worst. Mary and Percy never marry, causing them to be shunned, and Percy’s father cuts him off from his fortune. What follows is a lot of meandering narratives with Mary’s pregnancy and the loss of her child, her suspicion of Claire and Percy’s “affair”, Claire’s involvement with the famous poet Lord Byron, and Lord Byron’s cartoonish and childish antics.

The pacing was not enough to keep one truly engaged, despite it otherwise being an engaging story. Elle Fanning’s portrayal of Mary Shelley was moderately believable (mostly due to her convincing English accent), but it was hard to tell what her emotions were in any given scene. By the film’s end, I completely understood how Percy’s treatment of Mary led her to feel alone, rejected, and abandoned, but I never completely understood that while watching the scenes as they happened in real time. The story of Frankenstein is a wonderful story of how a person (ok, monster) lashes out due to feeling unloved and unwanted, and it is a direct parallel to Mary Shelley’s personal feelings. But where Mary Shelley the author succeeds in making those parallels clear, Mary Shelley the movie fails to make enough connections for a complete and satisfying storytelling experience.

Review: Why ‘Maleficent: Mistress of Evil’ is a Disney Film for Adults

The Baby-Sitter’s Club Drops All 131 Titles on Audible August 13th!

BGN #132 I The Mudbound Episode