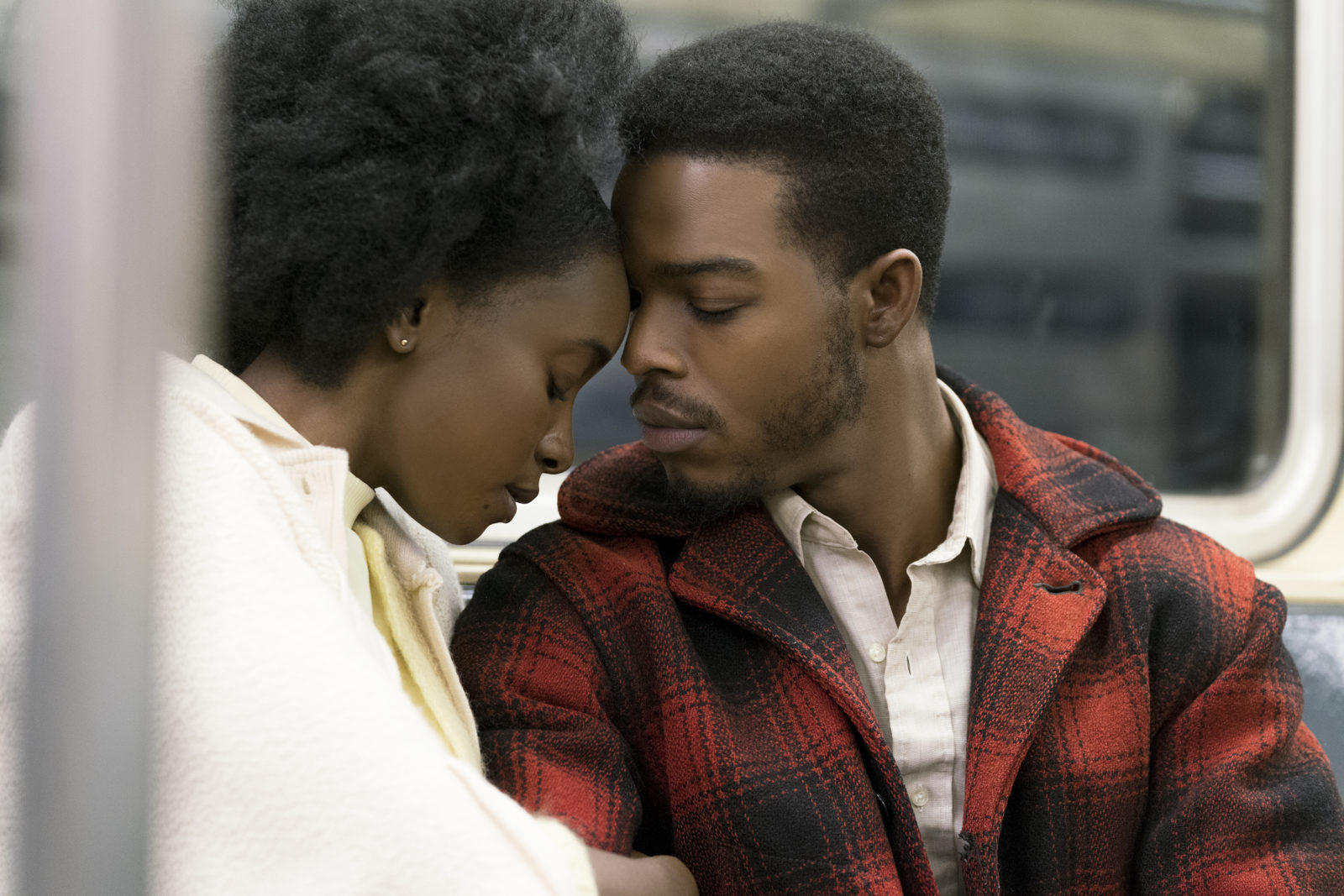 Time: the word tolled like the bells of a church. Fonny was doing: time. In six months’ time, our baby would be here. Somewhere, in time, Fonny and I met; somewhere, in time, we had loved; somewhere. no longer in time, but now, totally, at times mercy, we loved.         — James Baldwin, If Beale Street Could Talk

Being Black, young, and broke in 1950s New Orleans meant that time was never a friend in James Baldwin’s novel If Beale Street Could Talk. In the movie of the same name adapted from the novel, everyone connected to the couple at the center of the narrative seems to be wrangling with time in some way. Fonny (Stephan James of Selma and Race) and Tish (Kiki Layne in her film debut) are a couple fresh in love, who are facing the impending start of their family, a new baby. At the same time, they are also desperately trying to regain the time stolen from Fonny when he was falsely accused of rape.

Tish’s parents, played by Regina King and Coleman Domingo (Selma and Fear the Walking Dead), are running out of time to help their daughter. Fonny’s father (Michael Beach of First Sunday and Waiting to Exhale) is the only one visibly crumbling under the weight of time and all of the events threatening to topple on all of their heads once the time is up. His holy-roller mother is a topic for another time altogether.

Time is a character in If Beale Street Could Talk, one that plays both the villain and the savior. It the one thing that could free Fonny and also the one thing that could enslave him for the next several years. Time is the character that antagonizes everyone, while also setting itself up to be the one piece of evidence that could break the case. It is also the tool that racist authority figures use to entrench young Fonny and ruin all of the brown people involved with him. This is despite the fact that even a cursory attention to time in Fonny’s case could exonerate him. In this adaptation of James Baldwin’s novel of the same name, time is the one thing that could make or break the young couple’s love.

Time is also a tool that director Barry Jenkins uses to manipulate the adaptation enough to include the spirit of Baldwin in the film. Baldwin intermingles flashbacks and long, silent shots that seem to freeze time with other flashbacks that rush on and off the screen as if they are late for an appointment. Most of the flashbacks are abridged, the details don’t matter like they do in the present-day of the film. In the same vein, it is only in the present-day where we get enough time to take in every detail before moving on.

For example, there’s a flashback to the couple and how they met, speed that up to that first date, and onward to the first time they made love. These scenes are twisted like ivy vines around the present as if to hold it back even more. And, the present is already molasses slow. Tish seems as if she’s operating in slow motion when she breaks the news to her family about the pregnancy, after taking her sweet time with the discovery. Telling her mother alone is a whole scene unto itself. By bookending the slowing rolling present with the racing past, Jenkins gives the audience more than enough pacing variation to maintain interest. That’s as if they aren’t already so engrossed in the story that nothing else matters.

Yes, this all may seem like a bore, but all of the manipulations of time make for a compelling drama. The audience is treated to a look at how the romance grew while watching the family fight for Fonny’s freedom. As we fall in love with Tish and Fonny as a couple, we also watch nervously as time slowly runs down on them. Theirs becomes a family with little hope of existing outside the oppressive hands of the U.S. prison system.

If Beale Street Could Talk leans on the many ways that time and white supremacy come together to make life treacherous for Black couples and families. Jenkins helps that along with a generous dose of dialogue that sounds just like the bold, brash, but true words Baldwin was known for. That is combined with documentary-style clips narrated by Tish which are like the lengthy descriptions and sometimes rants that Baldwin is known for. The dialogue and narrated clips work to bring the spirit of the man through. At one point in the film — you’ll know it when you get to it — it’s like the man leans over and says, “Now watch whiteness work.” Jenkins ensures that Baldwin is never too far away from the story, despite the fact that the themes are so relevant so many years after they were written.

You will be hearing more about If Beale Street Could Talk as we amble into award season. The film’s relevance and the artistry in the cinematography are worthy of more than just a cult following. Jenkins has created a visual love story that also forces people outside the Black experience to feel — through the ever-looming presence of time in the narrative —just how hard it is to love and live #WhileBlack in America then and now.

If Beale Street Could Talk opens November 30 in theaters everywhere.