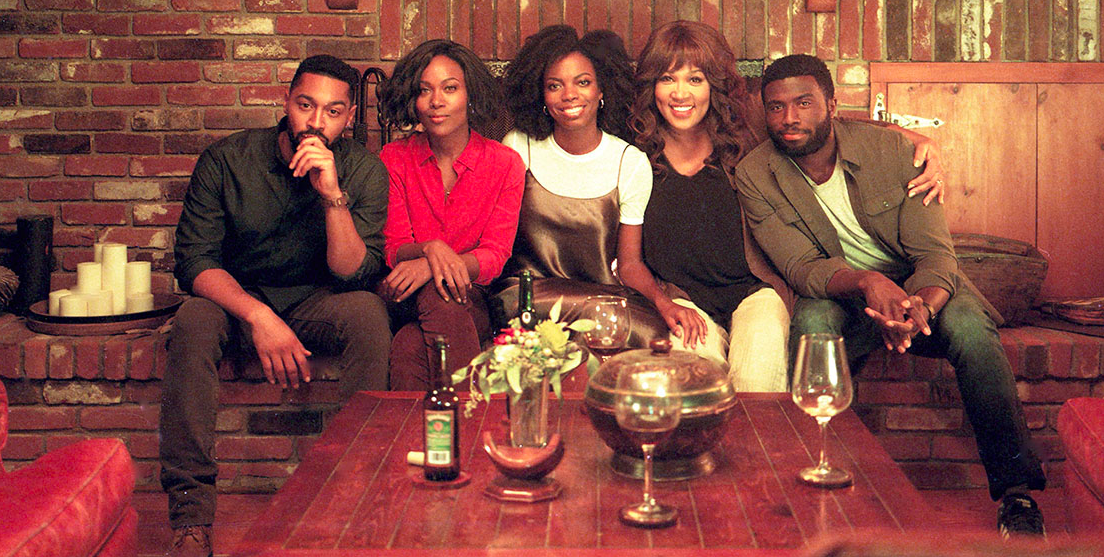 Writer-director Stella Meghie presents to us The Weekend, a whimsical rom-com about two ex-lovers who spend a weekend at a bed and breakfast only to discover that maybe their break-up was just a “break”.

There’s nothing new or groundbreaking about this narrative, but what is unique is the small yet mighty ensemble cast featured in this quirky story.  Our lead protagonist Zadie (Sasheer Zamata), is a stand-up comedian who opens up the film’s narrative in a Jerry Seinfeld-esque format. The rom-com could easily be condensed into a 30-minute sitcom with commercials to spare. Zadie is a self-deprecating, passive-aggressive, struggling artist who doesn’t seem to have a filter for her sarcasm. Her pessimistic and borderline snobby demeanor is a tool she uses to repel those she wants nothing to do with and yet at the same time attract those who do pique her interest.

Zadie’s friend and ex-lover Bradford (Tone Bell) along with his girlfriend Margo (DeWanda Wise) take a weekend trip to a resort B&B in the countryside owned by Zadie’s mother Karen (Kym Whitley). Karen and Zadie, of course, are like oil and water and nearly every decision Zadie has made in her young adult life her mother is seemingly unhappy with.

As Zadie checks into her room, she peers out of the window and sees a fine-lookin specimen walking out of his vehicle. His name is Aubrey and he’s played by the hotness that is Y’lan Noel from HBO’s Insecure. Aubrey is hot and very single and is obviously a play for Zadie’s confused feelings at this point. He uses his charm and charisma to distract her from trying to reconnect with Bradford (who’s totally not single).

And speaking of Insecure, a show whose lead character is notably known for her awkward and cumbersome experiences, The Weekend flirts with that as well when we see Zadie and Aubrey together. One particular scene takes place after the two go for a drive in the country, stop off at a convenient store, and ultimately decide to have sex in the backseat in broad daylight. I’m not sure if the scene was placed there to make us laugh or to show how out of touch these characters are with reality — but the clumsy attempt at humor was enough for me to want to learn more about how these characters think.  Even if it’s not completely on the level.

There’s also poor Margo, who I felt sympathy for during the entire run of the film. We are introduced to some dramatic irony here — the audience knows Bradford is not that into her — and sadly she has no clue. Yet she tries to stand up for her man as well as herself against Zadie’s incessant digs at her character. It’s kind of pathetic too because Zadie constantly shuts down Margo at every turn and Bradford (for the most part) just sits there and lets her take it. Inevitably it made me dislike Zadie even more and I wondered am I supposed to like or dislike this character?

Oddly enough as much as Zadie irked me during various parts of the story, she still made me laugh.

As I mentioned before, Zadie has little to no filter and she’s in constant stand-up-comedian-mode and uses her brash criticism and sneers to not only get laughs but to weasel her way out of a confrontation. And sometimes the mocking gets to be a bit much. However, what I did like about Zadie is she’s unlike any character I’ve seen in a rom-com and I was able to forgive these little idiosyncrasies about her behavior. I found that for her this was more or less a defense mechanism for someone that is in fact — wait for it — insecure.

She doesn’t warm up very quickly to men and we don’t even know if she has any relationships with women, the ones we do see her with (her mom Karen and Margo) are both flawed. So what leads me to wonder is this, does Zadie use the guise of being satirical and ridiculing others in order to guard against what she may believe people think of her?

The Weekend is a cute and eccentric comedy featuring an all-Black cast that doesn’t reinforce super lazy stereotypes and movie tropes we’ve seen in several Black rom-coms in year’s past. The movie doesn’t come without its faults because there could be some more retooling in the dialogue as well as building some more story structure around Zadie’s character. But overall, The Weekend was a delightful and entertaining film to watch and is another film on the path to refreshing cinema featuring new blood from Hollywood.

Sasheer Zamata finally got a chance to deliver comedy in a way she wasn’t able to do on SNL and we see her fully for the talented comedian that she is.

The Weekend premiered at the 2018 Toronto International Film Festival.