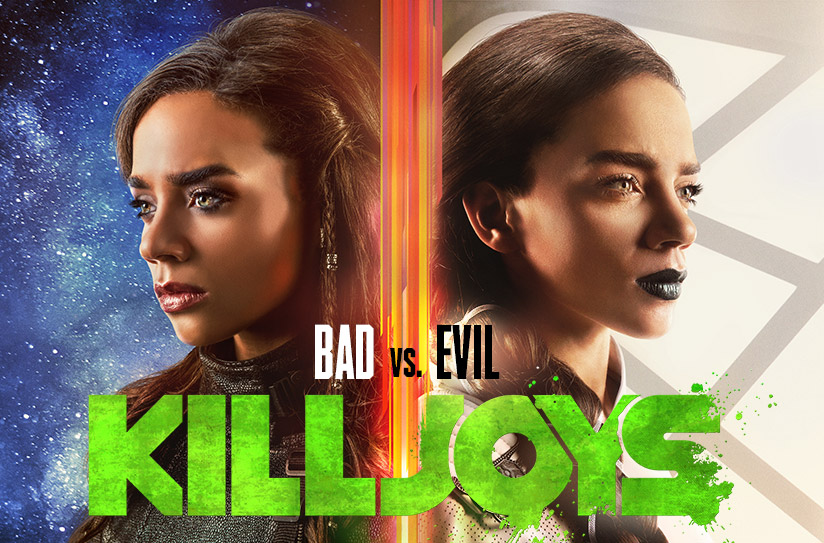 Dutch, Johnny, and D’avin have had quite the journey since we met them in the pilot episode, “Bangarang”. Life was simple at first, they took no bribes, took no sides, and the warrant was all. Finding out that their corner of the J (star cluster) had been compromised by an alien parasite that thrives in an all-purpose super goo, understandably, shifted their priorities.

Now they have a mission, a vendetta, and a game plan: take back the territory seized by Dutch’s centuries old doppelganger and commander of the goo (or plasma if you want to get technical). They started last year with their own RAC and this year they’re branching out beyond the Quad.

To recap, the Season 2 finale had many important developments. Delle Seyah Kendry killed Johnny’s girlfriend Pawter, so he shot her then ran away with his hackmod homie, Clara. Khlyen developed his own goo that acts as a plasma killer, but he had to sacrifice his own life to free the Quad. With the help of all her friends including a newly restored Fancy Lee (yay!), Dutch declares war on the hullen–the joined race of human hosts and plasma parasites.

The first four episodes of season 3 do a good job of setting up the various conflicts that feed into the show’s arc while still providing satisfying, self-contained stories within each episode. Obviously, Johnny went on walkabout, which gives him an opportunity to have some adventures independent of Team Awesome Force for a while. The show always had a bit of cyberpunk piping in it, but Johnny’s story really delves into that genre more deeply. We meet other hackmods and the lore around them expands exponentially. I will have a lot more to say about this when we get there, but just know I am truly excited for everyone to see this. It shines not just for world building reasons but for allegorical and inclusivity reasons as well.

#Killjoys is a show that fully knows how fun it is.

I don’t want to play favorites, and I doubt I’d be successful on a show full of favorites, but Thom Allison’s Pree had me clap-laughing at the one minute and forty-nine seconds mark of the season premiere. I think it’s because he reminds me of people I hang out with mixed with how layered the character is written and portrayed. Very expressive characters have a way of drawing attention in a narrative but even in the quiet moments, Pree is infinitely watchable. Episode 4, “The Lion, the Witch & the Warlord” will be like Christmas for Pree fans.

Like last year, Dutch and D’av spend a lot of time working together. Hannah and Luke have such chemistry with each other. The characters have truly been through the gauntlet of circumstances, gotten to the point where they thought they might not make it, and now seem stronger than ever. There is a fight scene in the premiere that is so enjoyable I watched it three times before moving on to the rest of the episode. It’s well choreographed and snappy with humorous quips abound. As intense as Hannah John-Kamen’s portrayal of Dutch is, sometimes to the point of being scary, she has impeccable comedic timing. No wonder she’s been booking jobs left, right, and center lately.

The scene was so good they made it a Variety exclusive, enjoy it below!

There isn’t just our old favorites but plenty of new characters to meet. Every addition  brings something interesting and refreshing to the table. Two standouts are Karen LeBlanc’s Banyon Grey whose full agenda lives in ambiguity and Kelly McCormack’s Zeph, a character we’ve seen in other shows but not in exactly this way. I’ll have plenty to say about both of these ladies when reviews of Killjoys resume on Friday.

Lastly, we have to give it up for Hannah again because her second character on the show, Aneela doesn’t disappoint. We glimpsed her briefly in Season 2, but this year we meet her in earnest. She’s a presence, a volatile storm so unlike Dutch in some ways, totally like her in others. She doesn’t so much chew the scenery as swallow it whole like a python. That Temple Street Productions sure does know how to cast an excellent actress to play multiple roles in a high concept sci-fi show, don’t they?

Add to all of this, the fashion! The show has always been stylish, but this year I find myself making more frequent appreciative noises at their outfits. I need the Syfy/Space/Whomever merch department to kick it into gear and give me the Killjoys lore and art book I need and deserve.

I am chomping at the bit to see what else is in store for this season. Won’t you join me, this Friday at 8 pm on Syfy?