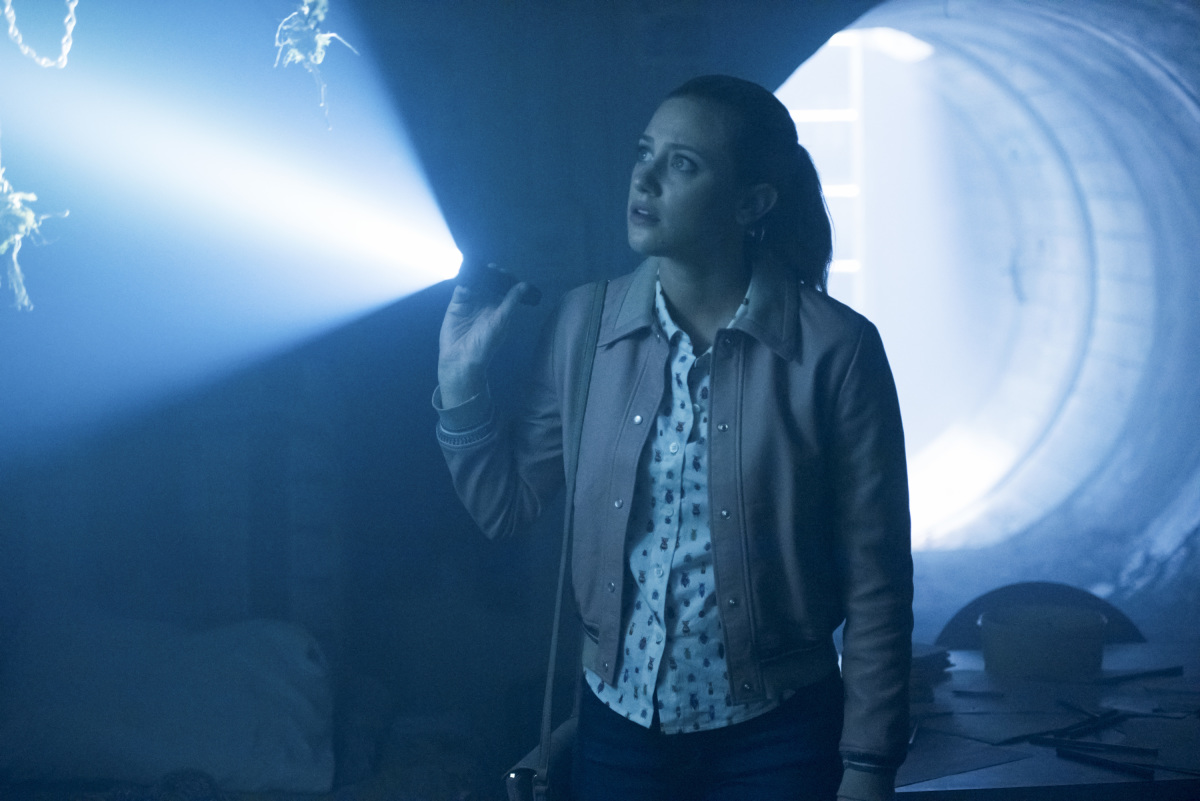 It’s time for more adventures with Archie and the gang, and I’m ready for my Riverdale trash. And to my immense pleasure, the ridiculousness is ratcheted up to dangerous levels this week. I’m not joking. It may not beat levitating babies, but you’d best believe I almost lost my mind over this one. And it’s only the second episode. I would ask, “What have I gotten into?” but I brought this on myself.

Welcome to Oz. We see Archie get a cruel taste of life in juvie lockup during a shamelessly gratuitous opening scene. Stripped, hosed down, and powdered for good measure. If this is supposed to make me feel sorry for Archie, I’m not. I’m laughing for the first of many times during this show.

Jughead is still reeling from witnessing that weird ritualistic operation from the last episode. We find out Dilton died, which no one seems to be upset about in the least.  It does, however, get Jughead’s Scooby senses rising and he tells Betty about the incident. They got all hot and bothered at the idea of injecting themselves into other people’s private business.

The prison movie clichés keep piling up, like a neverending Jenga tower. Of course, Archie has a big, Black cellmate named Mad Dog. Of course, he’s cold, unfriendly and gives Archie cryptic advice. I will go out on a limb and suggest he’ll become more talkative later on.

Betty and Jughead meet Dr. Curdle who is apparently in the middle of Dilton’s autopsy. The two pay him off, waltz on in, and immediately start taking pictures of their dead friend. Dr. Creepy doesn’t know if the death was by murder or suicide. What he does know is that it’s worse than every Big Bad from the previous seasons. It’s — wait for it — “The face of evil!” We have our season-long arc everybody.

Starting in order of escalating craziness, we have Moose and Kevin. Kevin just wants to be with his man, but Moose puts an end to any displays of affection. Moose’s father is the new ROTC instructor in school and is making Moose join up. Even worse, when Moose is out with his ROTC buddies, he gaslights Kevin and is passive aggressive. So what does Kevin do? Join the ROTC of course. This was my favorite storyline of the episode, and I felt invested in Kevin’s character — which is not something I can say for the rest of the Riverdale crew.

She’s vowed to break Archie out of juvie, but that doesn’t mean she can’t be class president in the interim. Veronica and Cheryl trading insults were some of the best scenes by far. During one of their mud-slinging sessions, Cheryl lets slip about an Innocence Project that could help get Archie out of detention.

Veronica creates a Riverdale chapter, but as usual, Hiram gets tipped off (more on that later). It’s starting to get boring. I know we need a formidable villain, but there is such a thing as being too powerful. In any case, he bans Veronica from seeing Archie.  All she needs to get around Hiram’s all-encompassing influence is a bad wig.

This episode made me like Veronica. She was plucky, smart and determined. The Romeo and Juliet melodrama was grating towards the end. But the storyline does a good job of highlighting Veronica’s best qualities. Cheryl’s still my number one, but Veronica isn’t far behind.

Oh boy. The writers for the episode just gave up when it came to Archie’s storyline. It’s almost as if they said, “Screw it, let’s copy every prison movie that ever existed. We’re done, let’s move on to the Gargoyle King storyline.” I know, I know this is the CW. And still, I wasn’t prepared for the sheer unbelievability of it all.

Archie’s having a rough time, and good old Mad Dog tells him he’s like an animal in a cage. Meaning he’s got to get violent to survive. Archie decides he’s had enough abuse and that the best course of action is to reason with the prison population. He gives a rousing speech about morals, high school, and – football? He convinces these idiots that the key to fighting the warden and proving everybody wrong is forming a prison football team. Just know that there is a guy in this scene who comes up to Archie and says, “I dropped out in the fourth grade. To run drugs to support my nana.” I just don’t have enough space to go into everything wrong with this scene.

The football game commences, and Archie gets a surprise visit from Veronica and the rest of the cheerleading squad. They perform “Jailhouse Rock.” Hey, why not, we haven’t had an implausible musical number in a while. Hiram shows up to rain on the fun parade. Then, I kid you not; a freaking RIOT SQUAD is breaking up the football game. I started laughing maniacally somewhere around this part. I don’t know; it was all a blur.

Oh, and OF COURSE Mad Dog died. In the riot, that Archie started. Later, the Warden pays a visit to Archie, who demands to know what happened to Mad Dog. The Warden ominously says that Archie will be the new Mad Dog. I’m tired.

Betty and Jughead are going to solve this mystery gosh darn it! Even if no one asked them to. Their trail leads them to Ethel. Betty and Jughead fashion themselves as detectives, but they come off like self-righteous jerks. Jughead is downright threatening to Ethel.

The two eventually discover that Dilton was involved in a group that played a game called Griffins and Gargoyles. Except all the players are a little too involved in the game, which is increasingly coming off more like a cult. Betty and Jughead confront Ethel, or “Princess Etheline.” She babbles something about him getting mad if she says anything. Before we know it, Ethel has a seizure.

In the final scene, Betty and Jughead are in the hospital visiting Ethel (not because they care about her of course). They decide to visit Ben Button’s hospital room to pull more information from him. We find Ben Button perched on the window sill, telegraphing the ending from a mile away. Betty tries to talk him down. But Ben is already going on about seeing Dilton again, and “ascending.” Betty takes a few steps forward and then he just…drops out the window. The editors didn’t forget to add in the sound of car alarms blaring outside. Just to make sure the scene has the levity it deserves.

The odd scene out this episode was an emergency meeting among the parents of Riverdale. The news about Dilton has them worried about their kids. The parents think they’re in danger. There’s also talk about secrets and pact between all of them. I assume this will all lead into the much-discussed flashback episode.

Ashley Turner is a part-time freelance writer who hopes to one day become a full-time writer with a wonderful blog or publication. Ashley has known her passion was writing since she made her first stapled booklet at 5-years-old.  She has written features and articles for a number of sites around the web. Ashley also runs a small Korean pop music podcast in her spare time. When she’s not doing that she’s kickboxing, playing video games, and writing some more. Ashley holds a Masters degree in International Media from American University.