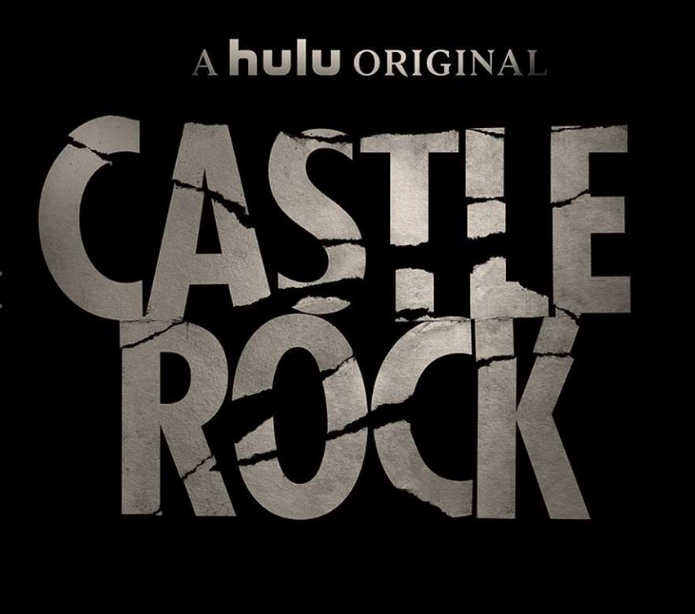 The title “Severance” serves as the title of the pilot episode of the latest Hulu series called Castle Rock which for sure will be the summer show everyone will be talking about. The head of one of the characters suffers the fate of being severed (ouch), and we slowly find out details about the meandering journeys of the residents of Castle Rock, Maine.

“Severance” becomes not only a literal interpretation of what we will come to expect—but evolves into a metaphorical one as well. The first episode premiered on July 25th, and this is a late recap of the first two episodes of the series.

This psychological thriller with a splash of horror is set in the Stephen King multiverse.  It’s an original story that combines the mythological storytelling of King’s best-loved works, (my favorite is Carrie) and it weaves unto itself a saga of darkness and light, played out on a few square miles of Maine woodland—which is textbook, Stephen King. 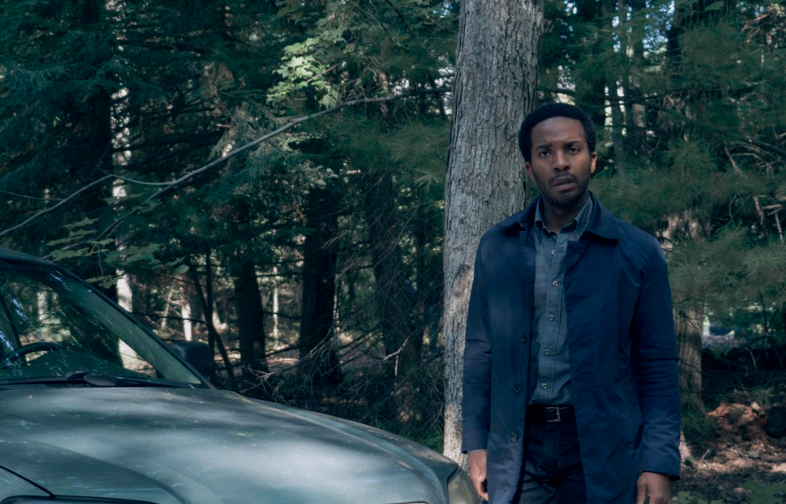 One thing I noticed that stands out for certain about Castle Rock is there is A LOT going on in the pilot episode. Pay attention because we are introduced to a significant number of subplots in the beginning. We first meet the character Henry Deaver (André Holland) as a young boy standing on thin ice in the middle of a lake. He’s saved by a local man by the name of Alan Pangborn (Scott Glenn), and we discover, his father who was with Henry, succumbed to the harsh weather conditions. Henry survives without any signs of hypothermia, so we know something is up. The young Henry Deaver (Caleel Harris) disappeared from his family for 11 days, and I’m not sure why as of yet, but I have a feeling the number 11 will play a meaningful role in this story.  Or perhaps I’m just yearning for another season of Stranger Things and trying my best to bask in the nostalgia of it all.

Henry’s adopted mother is played by none other than the eminent Sissy Spacek, and as you know as a Carrie fan, it was nice to see a Spacek in another Stephen King production.

Things get weird when we fast forward to present day and see that an adult Henry Deaver is now an attorney who represents death row inmates, and receives an anonymous call from a corrections officer at Shawshank Penitentiary. This now forces Henry to go back to his hometown of Castle Rock, Maine. 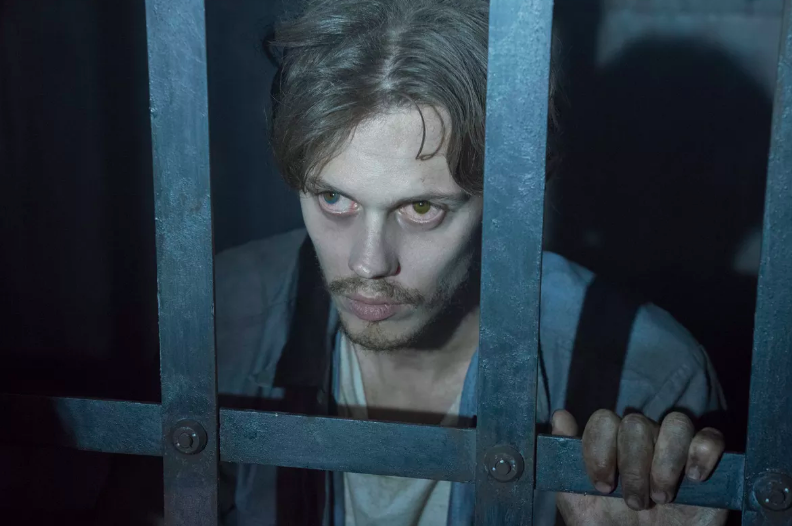 What prompted the anonymous call by the officer was getting spooked by a cryptic inmate aka “The Kid”  (Bill Skarsgård) who says his name is Henry Deaver. The officer knows immediately this is not true and this is what led to the phone call.  However, it gets even creepier when the mysterious inmate (who’s actually in a cage as opposed to a cell) appears to have some kind of supernatural abilities and communicates with the dead.

The casting of Castle Rock is quite impressive, along with the characters I’ve mentioned, we also have the former warden of Shawshank, Dale Lacy who’s life is parted quite early—played by actor Terry O’Quinn.  But don’t worry, this is not the last we will see of him as he later appears as an apparition to the mystic inmate. His wife Martha is played by actress Frances Conroy, yet another impressive talent who’s character appears to be blind.

In spite of all of the tiny subplots unfolding at once, the pilot episode held my interest, and many scenes reeled me right in. An impressive start to a new series.

As episode 2 pays homage to Shawshank Redemption by bringing on a third person narrator in the voice of the late Dale Lacy (Terry O’Quinn), we learn a little bit more about Lacy himself, as well as several other characters in this dramatic tale. We learn that Castle Rock over the decades has become a haven for murder and suicide and as Lacy so eloquently put it—”every inch is stained with someone’s sin.” 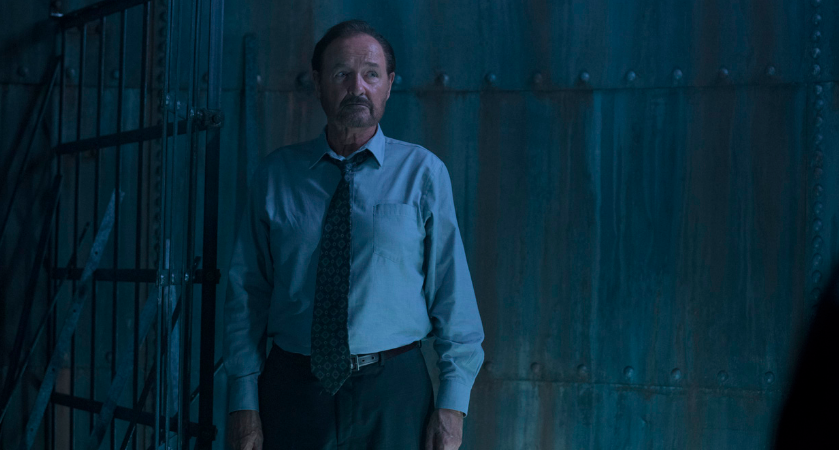 Henry pays Lacy’s widow a visit and begins to rummage through his personal belongings looking for clues as to what happened. As he’s looking through various personal effects; he stumbles onto notepads and memos embossed with this scripture from the book of Acts in the Holy Bible. The verse states: Even at that hour of night, the jailer cared for them and washed their wounds. Then he and everyone in his household were immediately baptized.” -Acts 16:33

This can mean many things, but we’re now getting a bit more character development about who Lacy is and how he felt in his position as warden of Shawshank. When Martha discovers after the fact that the man in her house is Henry Deaver, she immediately tells him to leave her property.

We then meet Jackie Torrance (Jane Levy), who is described as a morbid and death-obsessed woman who is the self-appointed historian of Castle Rock. And if you’re familiar at all with the movie The Shining, her name is a homage to the main antagonist of that movie. That also brings me to the fact that this show is riddled with Easter eggs from other Stephen King films. Fans of King will love and appreciate the remnants of information given which highlights films such as: Cujo, Stand by Me, and Needful Things.

In this episode, the new warden (Ann Cusack) not only has some big shoes to fill, but she’s got some problems that need fixin’. She does refer to herself in the pilot episode as “the fixer,” so this comes naturally for her. She decides to move “The Kid” (Bill Skarsgård) to another cell (yeah he’s out of the cage now) with a white supremacist. Although it’s never explicitly stated that he is one—the swastika tattoos inundated all over his body is a dead giveaway.

And speaking of dead, that’s what happens a little while later to the white supremacist inmate after sharing a cell with “The Kid”. Cause of death? Metastatic cancer in all major organs. This is getting weird. 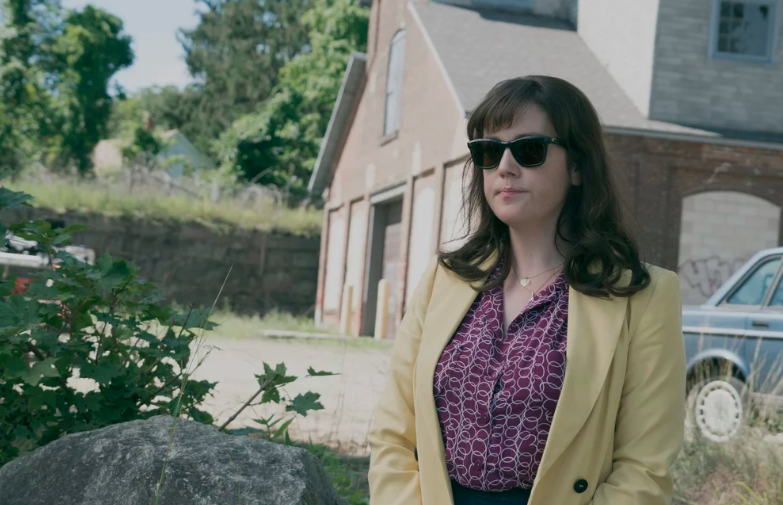 Molly Strand (Melanie Lynskey) is another character we learn a little more about in episode 2.  In the pilot, we see that she’s a pill popper and she appeared to know Henry and was a childhood friend.  Now we find out that they were pretty close and she was a little obsessed with him and had a schoolgirl crush. When a flashback to the night of Henry’s disappearance gives us a little exposition on what happened that night—we see young Molly (Cassady McClincy) questioned by law enforcement.  Shortly after she’s interrogated, we see fog coming from her breath as if she’s in a cold room, but the room itself is cozy and warm. So perhaps Molly has some powers as well?

Henry comes face-to-face (at a distance) with the unnamed inmate and offers to represent him. And then we discover that Lacy’s narration was a letter to Alan Pangborn the whole time.

After watching these first two episodes, Castle Rock is the psychological thriller series I’ve been waiting for. I had a feeling when I saw J.J. Abrams and Stephen King together on a project I was bound to enjoy it. Hopefully, the latter episodes are just as compelling.

Castle Rock is currently streaming on Hulu with new episodes every Wednesday.