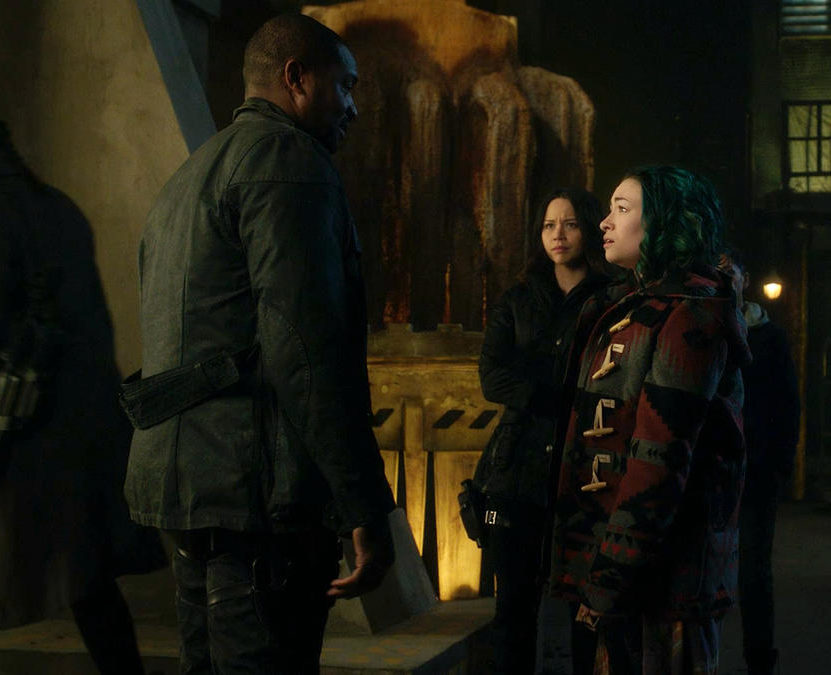 It’s always difficult to do a review of dystopic sci-fi based around corporate and governmental oppression fresh after anti-Black terrorism racks up another win. It’s not merely the depiction of jackboots intimidating workers that disquiets me, but the fact that the POV will no doubt be unsatisfying. Never fear, like most other Black people in America, I have a well developed double consciousness that will allow me to review the show I just watched and save the reflective political commentary until the end.

We start with a simple mission that grows complicated. The Raza crew need to replenish their supplies. It makes sense that they need to go find Tabor, their handler so they can book some work. Writing the character of Tabor out of the show in a way that leaves it open for David Hewlett to come back is a good move. He’s a fun character but definitely one that works well in small doses. Replacing him with Adrian and Solara injects a new dynamic into the mix, which works well for the most part.

I found the conflict between Two and Six to be very plausible, but I feel like it could’ve been built up over a few more episodes before coming to a head. I appreciate that it didn’t get acrimonious, but would have liked a bit more of a ‘moment’ between them during their goodbye. Two and Six have always been the parental figures for the crew, making decisions based on what they think is best, offering guidance, arguing and hashing things out, respecting one another’s voices, and finding resolution. Even in the beginning of season 2 when Two had every reason to mistrust Six, she extended herself, trying to understand why he did what he did. Then she put her safety on the line to save Six’s life and bring him back into the fold, overruling Three’s vociferous objections.

Two and Six have been through a lot including that lovely conversation on the Marauder last week. The characters balance one another incredibly well. Melissa and Roger play off each other expertly. As of this writing, I’m not sure if Roger has been taken down to a recurring character or if he’s off of the show completely, but either way, his solid, peaceful presence will be sorely missed in this ensemble.

In all reality, Six would not be able to beat back the corporations forever, war or no. It’s a munitions colony for goodness sake! At some point either Tralgot is going to come back to reclaim their assets or one of their enemies will come to commandeer them, and then Six and everyone else will be under their boot or killed. In the moment I was like, “Hell, they need the General, Six. wyd?”
ALSO READ
10 Must-See Anime Attractions For World Traveling Otakus

However, I allowed a pile of dead jackboots to seduce me from my good sense. The General is a bottom feeder trying to amass more assets for his own cause, unleashing murder, mayhem, and destruction to precipitate the conflict between Tralgot and the workers. Even squirrelly yet likable Adrian is trying to work an angle, hustling to become the would-be independent colony’s union representative. These people really get yanked around in big and small ways this episode.

Six’s attitude of imposing nonviolence on the colonists bugged me because it’s always the Oppressed’s responsibility to de-escalate and find the human way to resolve conflict, whereas the mighty do whatever they want, which allows them to stay in power. They can ensure low wage earners work in unsafe conditions for 3 decades using superior weaponry like this lot, storm through a colony ready to blow it sky high like Ferrus Corp’s commandos in the pilot episode, or be caught on tape murdering innocent people in front of their families and friends without threat of reprisal like far too many American cops. None of that matters, there will always be some schmoe advocating for their humanity even as they disregard everyone else’s.

Meanwhile, on Zairon Ryo has sent Misaki off-world to handle some military business. He probably can’t even look at her right now. Still, he does seem to have taken her counsel to heart and is ready to deal with his former friends aboard the Raza. He assembles a motley crew of assassins to take them out once and for all. I hope that this course of events leads Six back to his Raza family. They need him!