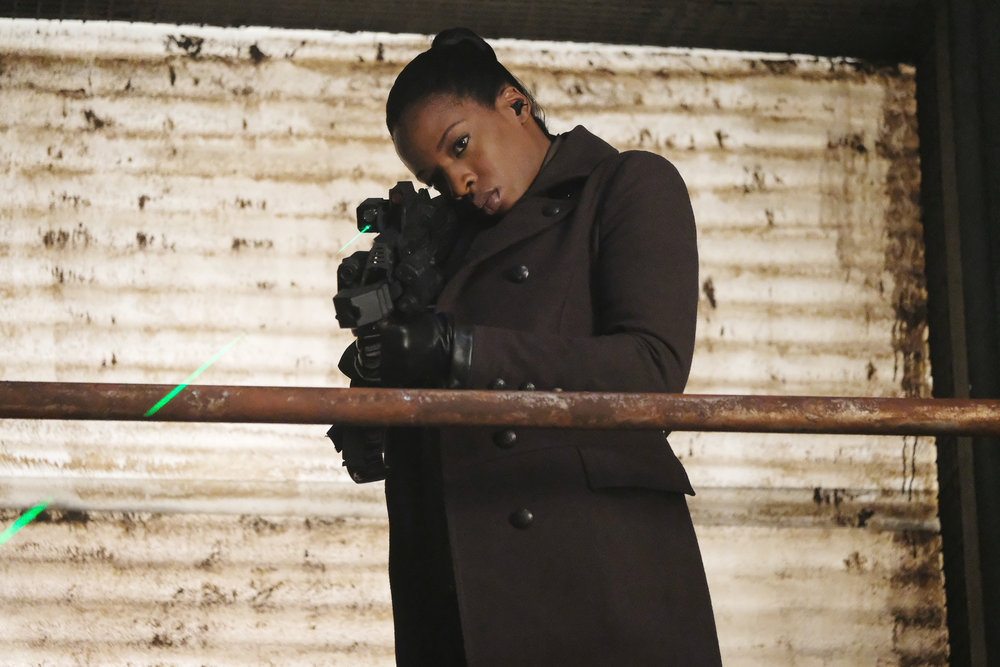 Dark Matter excels at misdirection. This was evident from the end of the Pilot when my mouth fell open at the reveal of the Raza crew. Maybe I’m just an easy mark, but I had a similar reaction at the 8 minute and 45-second mark of “One Last Card to Play”. (RIP All those innocent Ishida subjects).

When Portia and Boone were shown to be mixed in with the would-be assassin’s clan, my mind started mapping possibilities for Two and Three’s confrontation with Ryo. I settled in to enjoy what I thought would wind up being an infiltration sequence of the Ishida palace only to be blindsided.

In quick succession, we get two answers to ongoing plotlines: Zairon is at war with a fellow independent planet called Piere, and the escapees from the alternative universe are … well all of them save for Jace Corso, the alt-verse facesake of One. This was a good call on the show’s part since Two already had the cathartic revenge kill of main-verse Jace. He can always come back later, but for now, everything is already so fraught.

After Portia and Boone pull off that excellent con at the start of the episode, they become less interesting as characters since their goal is greed and not the complex, difficult ethical and survival dilemmas that our main Raza crew grapple with in each episode. They’re just another adversary the Raza crew needs to take down.

The alt-crew’s strength lies in their ruthlessness, but their weakness lies there too. They’re willing to do whatever it takes to win but they’re eager to turn on each other, as they do when they let Wexler be the bait and collateral damage for their plan. This flaw comes up again when Tash is willing to kill everyone in her crew to win. Thankfully, Alt-Android is there to keep that from happening. I’m thinking that Portia had Android created as a failsafe for herself, knowing none of her crew could be trusted.

Solara is the MVP on the planet, yet again! She’s really good at standoffs in groves of trees. She simply walks up to Wexler, takes his gun and backhands him to the ground, all the while probably reciting steps to enlightenment in her ex-monk brain. She barely changes facial expressions.

Five has amassed so many MVP awards at this point so her bursting onto the bridge is just another feather in her cap. It’s gratifying to see adequate and efficient bridge security on the Raza. Season 1 was a mess with people crossing, double-crossing, crisscrossing, and everything else. There should really be an automated security protocol on the bridge at this point.
ALSO READ
Actor Tatyana Ali to Appear in Peacock’s 'Bel-Air'

The episode overall did a great job of having two plans running against each other that the audience was largely in the dark about until everything played out. With the exception of the first twist, there weren’t any huge surprises, but it was all very satisfying. We’ve seen so many Crew Plans In the Mess scenes that we can pretty much supply it for ourselves at this point (including Three’s bluntly hilarious asides and Five’s eye rolls).

At the beginning of their story this week, Adrian is philosophically building a case for why he shouldn’t be on the Raza, trying to include Solara in his self-indictment too, only for her to be like, “Um don’t lump me in with you, dude.” It’s like when White folks talk about how “we” elected Trump and Black women have to remind them, “we, didn’t do shit.”

Who Adrian reminds me of has been gnawing at me since “Welcome to the Revolution” but became clear when he was talking to Two about his concert pianist aspirations. He’s a way more appealing, non-sniveling version of Andrew from Buffy the Vampire Slayer.

I am going to miss Adrian and Solara. Adrian brings such a contrast to the other characters, and Solara brings her own gorgeous and powerful blend to the dynamic of the Raza crew. I hope they come back in some capacity. My hat is off to Ayisha Issa and Mishka Thebauld. They have great acting chemistry and brought a lot to this season, so if this is farewell, they’re going out strong. If I had to tag myself in this episode, I’m the Android telling Solara she can stay even if Adrian leaves. He’s cool and all but Solara is wifey.

All is not lost! Kudos to Team Dark Matter for showing some restraint in not killing them off as is their wont. Of course, an episode with no major deaths means Portia is already sidling up to Ferrous Corp so her crew can take our crew out. I’m getting nervous!