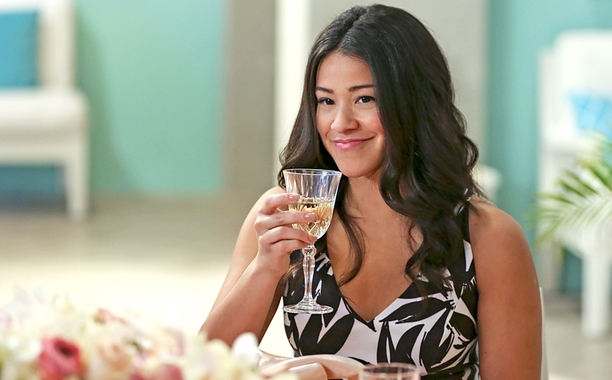 Jane the Virgin’s season three finale—”Chapter Sixty-Four”—is set against the backdrop of an impending tropical storm as we prepare for the most high-profile, celebrity-packed wedding since Will and Kate’s: Rogelio and Xiomara’s.

Jane is semi-stressing to plan her mom and dad’s Big Day.

She becomes an ordained minister and is searching for a wedding ceremony template when Xo asks her to write the ceremony from scratch, “your dad and I were kind of hoping you’d come up with something personal. We want the ceremony only you could give us.” Xo implores: “since you’re a writer.” Jane, knowing how many other things she’s got on her plate, but who can never say no to anything, reluctantly agrees—which actually causes me second-hand distress at how busy Jane is.

As Jane, Xiomara, Rogelio, and Alba run down the wedding checklist, it truly feels like a fairytale wedding in that this episode already feels like a fun, light-hearted family affair (the kind that Jane has been longing for since discovering Ro was her dad). With 48 hours until their wedding, Jane tells Ro “all your ex-wives and ex-agents send their regrets” and that “Marc Anthony is attending, and per your instructions, he will be asked ‘who are you?’ and turned away.” This is peak Super Jane, and nothing will slow her roll, even when a little rain turns into a tropical storm turns into a hurricane — she simply initiates Wedding Plan B.

At one point, a visibly shaken Darcy hops in Jane’s car, tells Jane that she’s pregnant, and asks Jane to break the news to Ro: “I just think he’d take it better, coming from you,” she says. I mean, come on man! Can’t Jane catch a break anywhere during all this furious wedding planning?!

Although Jane is the one who initially tells Rogelio, ultimately (thankfully) Darcy, Ro, and Xo all meet at the Marbella to discuss the baby.

It’s here that we get to see the customary drama that has given way to overwhelming feelings of positivity in this episode—this scene actually ends with Xo telling Ro “I wanted to marry you, but not like this.” Rest assured, our two lovebirds talk it out—and mirror Jane and Michael’s relationship, maturely deciding to be there for one another and the baby during this difficult time.

Speaking of Michael, much to my bittersweet enjoyment, he’s a central piece of this season’s finale (and a running theme in the previous episode, as Ro tries to come to terms with Jane’s dating life). When Jane visits her church’s priest for assistance in writing the wedding ceremony, she’s reminded of her time spent with Michael preparing for their wedding. As the episode flashes back to Jane’s own wedding preparations amidst her preparations for her parents’ wedding, we see Jane and Michael discussing their impending nuptials in the same priest’s office. They were supposed to write letters to each other to read when they needed them the most, and Jane laments that Michael never wrote his. The priest assures her that he read Michael’s letter, sending Jane on a frenzied chase to track it down. We then see various flashbacks of the events that led to his meeting Jane, and flashbacks of their relationship throughout the episode.

That’s okay, I’m fine—really, I’m not crying as I type this.

When Jane finally does get her hands on Michael’s letter, delivered via a mystery man who arrives at the Marbella after the wedding, it feels like destiny in the sincerest way possible. “Let me explain:” Jane has been slowly feeling some things for Rafael throughout this season, even as he’s been rekindling his relationship with Petra, who’s kind of still seeing Chuck. This love rhombus feels like it’s been leading up to Jane and Rafael’s reunion—only, it hasn’t. It’s been bringing us full circle back to Jane’s first love.

In the beginning of the episode, our narrator mentions that the Villanueva women have stood by each other through good times, bad times, births, deaths, and first loves: “his name is Adam,” flashback Jane gushes. In the next flashback scene, Xo consoles Jane as she tearfully laments that she’ll never fall in love “like that” again.

Flash forward to the present, where Jane is reading Michael’s letter while walking out to thank its messenger. She runs into none other than aforementioned Adam (Tyler Posey, finally!). “And never doubt that all I want, forever and always, is for you to be happy,” reads the end of Michael’s letter—and I dissolve into a puddle of tears.

Although this episode mostly centers on Jane’s family, we do get some answers regarding Scott’s murder: Eileen killed him. Yes—the real Eileen. “Let me explain:” Scott happened to see her just moments after he’d seen her doppelganger, aka Rose aka Sin Rostro in the Marbella. Eileen panicked and struck Scott—killing him—to protect Rose’s secret and keep herself alive.

If you think my reveal and subsequent explanation was a bit of a letdown, I assure you: I meant it that way. For whatever reason, be it the Villanueva’s family excitement about the wedding or Jane’s attempt at finding Michael’s letter, this episode had me disinterested in the overarching murder plot—it felt more like the background to Jane’s finally fairytale. And perhaps that was the writers’ intent?

Jane the Ordained’s best moments were the quiet ones: Alba yelling her praise at Xo to keep from crying, Jane and Rafael noticing Jane’s book on the bus ride to the Marbella, Chuck professing his lingering feelings for Petra, Jane resting her head on Raf’s chest as he calms her down about the gale force winds…no, I’m actually not really a Jafael shipper, I just appreciate the fact that these two can share more and more intensely intimate parts of themselves with each other and create a stronger bond with which to raise Mateo.

Other substantially notable developments that are sure to reverberate throughout season four definitely includes Anezka’s and Louisa’s fateful taxi ride in which they exchange vitally damaging information that leaves Petra with a gun pointed at her head and Rafael penniless. My overwhelming thought when Louisa comfortably settles in to Raf’s desk: “How the hell is the absolute trainwreck that is Louisa gonna run the Marbella?! Run it into the ground, sure.”

But friends, we’ll cross that bridge when we get there.

For now, it’s enough that Jane looks poised for her happy ending (one where she’s a successful, published author and kick-a** mom who realizes there’s no such thing as a “happily ever after,” which she lovingly tries to instill in Mateo). She’s for sure earned some happiness, even if it won’t last too long—as our narrator likes to remind us, “this is a telenovela after all.”

Catch Jane the Virgin season 4 on The CW this fall in its new time slot, Fridays at 9 pm EST/6 pm PST. Catch up on seasons 1 through 3 on Netflix.