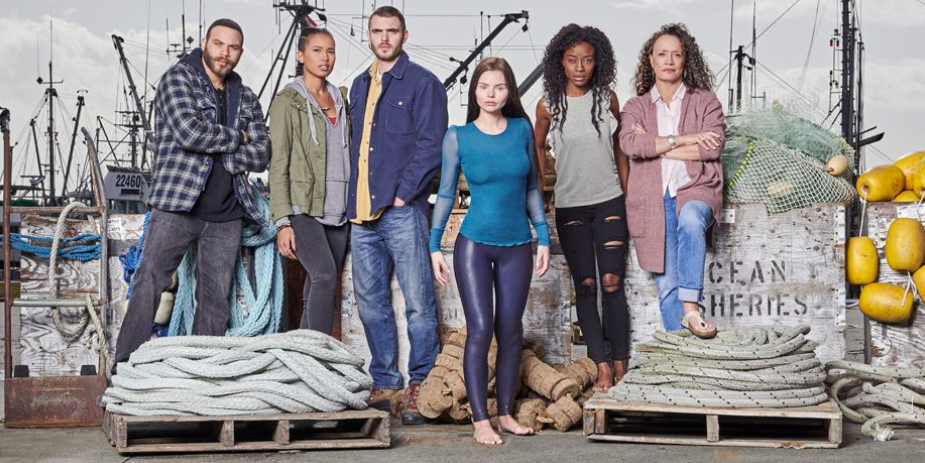 *Mild spoilers for Siren season one.*

When I was a little girl I used to swim underwater — the ocean, a pool, my bathtub —holding my breath as long as I could and praying to whomever gods were listening to please turn me into a mermaid. This was part escapist fantasy. It was also a genuine wish for my physical form to express more of my biracial Sri Lankan American and multicultural hybrid identity outwardly. Anaïs Nin’s quote, “I must be a mermaid, I have no fear of depths and a great fear of shallow living,” solidified my mermaid-out-of-water-ness. But in spite of so much amazing lore about these enigmatic and dangerous creatures of the deep, it wasn’t until FreeForm’s Siren that we received a proper and nuanced exploration of mermaids beyond shell bras, blue hair, and purple glitter.

The fictional setting of Siren, Bristol Cove, Washington, sells itself as the mermaid capital of the world due to the legendary history of the town’s founder Charles Pownall and the mermaid he fell in love with who joined him on land. But this isn’t a romance story: Charles and his mermaid had a baby who was killed for its “deformity.” When the mer-mother returned to the ocean in blinding grief, Charles went mad and after her, slaughtering hundreds of merfolk in the process. Bristol Cove markets a sanitized version of this tale of mass murder in which Charles and mer-bride lived happily ever after. Tourists flock from around the world to swim in the lie, capitalism at its most consumeristic and problematic.

And while Bristol Cove’s mer-tourism is its biggest economic draw, fishing is its second. When veteran fishermen catch a mermaid in their net, the town’s web of secrets quickly unravels as the body count rises. These are not your narcissistic Disney mermaids with nothing better to do than comb their hair. The mer of Siren have sharp teeth and claws along with their scales and flowing locks. They are uber-predators of the deep on the same level as sharks. And the mermaids’ transformation from aquatic to land mammal is like a werewolf shifting — painful, loud, violent, and grotesque. As in the stories of old, the mermaids’ song is deadly to any man who hears it. They are a matriarchy, after all.

Within the first episode, “The Mermaid Discovery,” Siren not only sets up a world where realistic mermaids exist, the levels of social commentary go deeper. Because of humans’ overfishing and climate change, mer-sisters Ryn (Eline Powell) and Donna (Sibongile Mlambo) were forced to travel too close to the surface in search of food, leading to Donna’s inadvertent capture. The military quickly swoops in and remand Donna into their custody, along with a sailor she wounded, where they immediately begin poking and prodding at her for science. She is kept in a too-small tank, tortured, and her stem cells extracted while she is awake, in a powerful indictment of military and medical industrial complexes that have kidnapped, enslaved, and used Black bodies for their experiments since the beginning of America. And yes, Donna is a dark-skinned Black mermaid, making this a particularly powerful statement about just how Black lives matter when it comes to war and science.

Ryn sheds her tail and goes onto land to find her sister, but first encounters Charles Purnell’s descendent Ben (Alex Roe) who tries to help her before she slips away. Ryn’s next human interlude involves a would-be rapist who she throws through his car window, killing him and sparking a town-wide manhunt for the monster that did this. Through another violent encounter with the mermaid, Ben realizes who — what — she is and begins enlisting others to help. Maddie (Fola Evans-Akingbola), a half Black half Haida conservationist, joins her boyfriend Ben to help this mermaid in need. They find another ally in the town eccentric Helen Hawkins, played by Maori actress Rena Owen, who claims to own the only authentic mermaid shop in an oversaturated market. Helen believes in mermaids and knows they are real, the fact that gets her labeled a kook by fellow Bristol Cove-ers, and helps Ryn on her quest to recover her lost mer-sister.

The injured sailor who was also taken captive by the military, gets a message to his friend Xander (Ian Verdun), although Xander remains in the dark about the presence of mermaids.  Ryn and Company eventually locate Donna, who in the meantime has used her siren song and wiles to shed her tail and escape from the military base.

The drama doesn’t end with the sisters reuniting. Donna, consumed with rage and revenge for the torture she survived, returns to the water and brings a cadre of merfolk with her on land to kill the ones who hurt her, including her sister, who is now seen by the merpeople as a traitor to their kind. I couldn’t believe my eyes when the lead merman warrior was also Black (played by Sedale Threatt Jr.), and the alpha female mer-leader is Asian (Aylya Marzolf). I cried. I’ve never seen either before, and seeing an Asian mermaid in Western visual media filled something missing in my heart. As it turns out, Aylya Marzolf is also biracial like me. Representation is so healing.

And the diversity doesn’t stop there. The cast of Siren is majority BIPOC, and many of them in inter- or in multi-racial partnerships. Like in real life, the diverse cast isn’t made a big point of in the show, it just is. It’s glorious.

In order to retrieve Donna as well as draw more merfolk to the surface, torturemonger Dr. Decker (Ron Yuan) and his military goons force an environmental crisis by repealing quotas for the fishing industry to starve the merpeople to land — colonization at its finest. I couldn’t help but think of when the US Army killed thousands of buffalo in order to force the Lakota people into starvation and onto reservations.

What results in Siren is then a perfect storm of exploitative humans vs. merfolk and their allies, ultimately becoming a treatise on what it means to be human in all of its compassionate complexities as well as destructive tendencies.

But the social commentary exploring issues of colonization, slavery, genocide, climate change, overconsumption, capitalism, and critiques of the military and medical industrial complexes doesn’t stop there. Themes of sisterhood, male privilege, and entitlement to female bodies, as well as attempts to dismantle toxic masculinity are also cornerstone themes in Siren, making this one of the most socially conscious and inclusive pieces of visual media since Sense8.

The show even goes so far as to address the obsessive nature of addiction through the metaphor of the enchanting siren’s song as well as delving into those beings — mer or otherwise — who live in border spaces and on the margins of society. This metaphor deepens with how the humans perceive these small, strong and fierce merwomen: they must be on drugs to accomplish the physical feats they do.

Best, all of these social justice themes arise organically from the story without being ham-handed, as it would have been easy to do without such solid writing and creative development behind each Siren episode.

All its positives aside, Siren does sometimes veer into hokey territory with the occasional stilted performance and some low-quality CGI, but these are easy issues to overlook with so much else going on. Siren is far from lighthearted fantasy fare and would be better classified as a horror drama, but there is still something extraordinary and magical about being able to escape into a world where mermaids are a plausible reality. Turns out, you can have mermaid ancestry without the ability to change in the water, so I’m off to officially change my species identification.

And even though the season one ending felt rather abrupt, it still leaves a lot of room to develop the story both inward and outward, and in potentially scarier ways than the first season managed. I was thrilled to see Siren has been renewed for a second season airing in 2019, which gives everyone who hasn’t seen this captivating show ample time to catch up. I’ll be over here watching it on a loop until then.

Sezin Koehler is a biracial Sri Lankan American horror novelist whose writings have been featured on Wear Your Voice, Bitch Magazine, Teen Vogue, Broadly, Ravishly, The Mary Sue, Huffington Post, and more. You can find her Tweeting about politics, Facebooking about writing, and Instagramming her growing collection of art and tattoos.