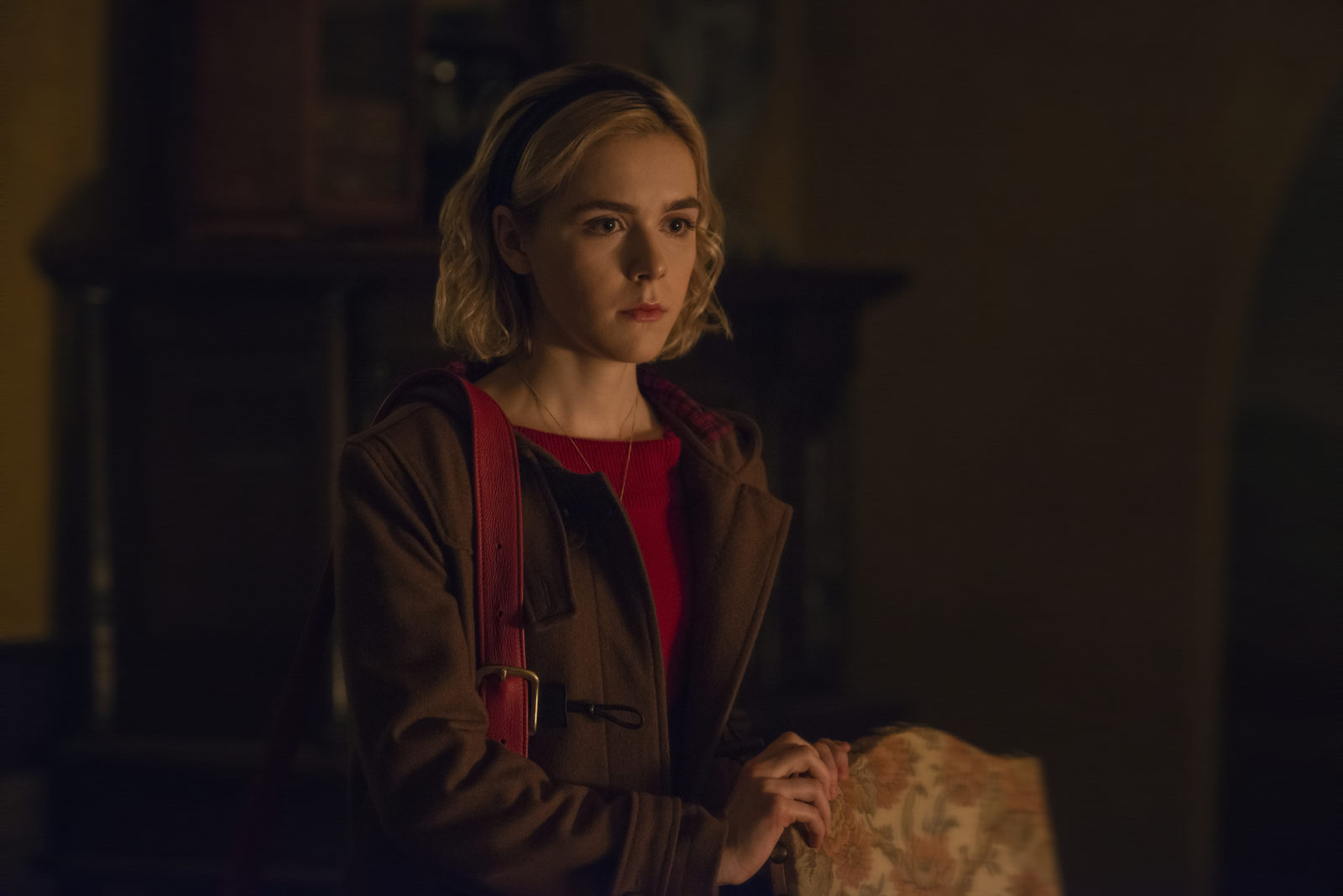 Sabrina The Teenage Witch is the newest Archie Comic to get the so-called Riverdale treatment, although to mixed effects in Netflix’s upcoming The Chilling Adventures of Sabrina. Sabrina Spellman (Kiernan Shipka) lives in the forest town of Greendale with her Aunts Zelda (Miranda Otto) Hilda (Lucy Davis), and cousin Ambrose (Chance Perdomo) in their mortuary-slash-home. While her family is all full-blooded witches, Sabrina is a witch-human hybrid. On the eve of her 16th birthday, she is destined to relinquish her ties to the mortal world and step into Satan’s Church of the Night.

Yes, Satan. The witches of Greendale all worship the dark lord. Sabrina’s 16th birthday is the night she officially signs his ledger and pledges her immortal soul to him.

I have been looking forward to this reboot for months, especially since Riverdale did such a fantastic job of Twin Peaks-ing the wholesome Archie Comics of my youth. And while it does have a few redeeming factors (which I will get to), the first five episodes of The Chilling Adventures of Sabrina have me painted in disappointment.

Firstly, witches don’t worship Satan. Satanists worship Satan. Most witches don’t even recognize the Judeo-Christian hierarchies that lend so much importance to the dichotomy of good and evil. Most witches shy away from binary thinking, focusing on a holistic view of the world, spirituality, nature, nourishment, and all these resulting magics. Linking witches to Satanism perpetuates a dangerous stereotype about certain kinds of women that often leads to their abuse, social and familial ostracism, and even death.

Secondly, The Chilling Adventures of Sabrina implies that witches are a race. When Sabrina is bullied about being half human, she accuses her bullies of racism. Witches in this context would not be a race, they would be a species. Having a blonde, white woman accuse actual women of color of racism is facetious at best, and offensive at worst. Especially when Sabrina even goes so far as to hang her Black classmate from a treebranch noose to “teach her a lesson.” This isn’t just socially and culturally insensitive — and repugnant — it also ignores the long history of Blacks being strung up by whites for this very reason. Stop whitewashing real racism. Stop making white women perceived victims of their race. White women are a protected class. The Chilling Adventures of Sabrina ignores that fact.

Thirdly, while I commend Sabrina for its inclusion of some major LGBTQ characters, their treatment is hella iffy in this show. Sabrina’s friend Susie (Lachlan Watson) is constantly getting beaten up, her face bloody and bruised for most of our introduction. And this is the crux of her presence, nothing much else other than being queer and bullied. Pro tip: If your character development consists only of an identity label, you’re doing storytelling wrong. Sabrina makes up slightly for this huge misstep by crafting a fascinating character in Sabrina’s gay cousin Ambrose, but it’s not enough to balance out the grotesque treatment of Susie.

And for these major issues, Sabrina still does its damnedest to prove its social justice cred by name-dropping buzzwords like Big Bang Theory to spew out lackluster pop-culture jokes. Just because you use words like “ally”, “intersectional”, “fascist”, and “white patriarchy” in dialogue doesn’t mean you’re woke. Being woke means creating a narrative that addresses the various social justice issues relevant to your audience. And Sabrina does not manage it, at least not in the first 5 episodes. Tokenism is the furthest thing from being socially conscious.

Because of this, Sabrina reads like the showrunners watched all the witch movies and television, then coded all the elements and tropes, dropped them into a cauldron with social justice vocab, and randomly pulled them out and inserted them into the narrative. There are shades of Teen Witch, Practical Magic, Buffy the Vampire Slayer, Jennifer’s Body, An American Werewolf in London, Jeepers Creepers, Blair Witch Project, Dark Shadows, Six Feet Under, Lost Girl, and more. But not in a clever homage way. It’s heavy-handed and obvious. They are trying SO HARD to mimic other successful shows that they never bothered to find their own voice. It feels they are trying to make Rob Zombie’s Lords of Salem with a Quentin Tarantino vibe, for a younger audience. And while that premise sounds cool, it’s far from accomplished. Seams are showing everywhere. This spell is a dud.

While the titular Sabrina is rather vanilla, the older women characters are all fabulous in their own ways and are often more interesting than the younger cadre. Miranda “I Am No Man” Otto and Lucy Davis as antagonistic yet co-dependent sisters are fantastic, and often horrifying. Michelle Gomez as the demon-possessed Mrs. Wardwell is deliciously evil. Chance Perdomo as Sabrina’s cousin Ambrose is also a welcome addition as a gay wizard with some actual agency in spite of being under house arrest.

Sabrina’s best friend Rosalind “Roz” Walker, dynamically played by Jaz Sinclair, should be the star of the show. Roz is an outspoken feminist, bookworm, and budding activist who steals every scene she’s in. I hope to see more of her as the show goes on. In fact, just give her a spinoff series already. It’s a waste of such a cool Black character to simply be relegated best friend like so many Black actors are.

To Sabrina‘s benefit, though, there is something charming and so old-school Archie comic that the majority of the telephones in this reboot are rotary even though the story takes place in a modern setting. This detail adds an effective touch of vintage magic to counteract the rest of the pop-cultural wallpaper overwhelming the show.

While I did watch the original Sabrina the Teenage Witch, I wasn’t a fan. I found Melissa Joan Hart insufferable and I prefer my witchy stories a tad darker. But what was subversive about it was the fact that it presented a totally non-stereotypical kind of witch who was superpowered, and also a total dork. She wasn’t a cool witch like on Bewitched or Charmed. Neither were her aunts. We never think of witches as wholesome, and there was something a little rebellious about that. The Chilling Adventures of Sabrina, in contrast, feels all too familiar and all too stereotypical.

What is indeed valuable about The Chilling Adventures of Sabrina is its discussion about consent in many different arenas. From sexual contact to the privilege of choosing one’s path in life and bodily autonomy, Sabrina battles for her right to make her own decisions. Sabrina is only one year older than Christine Blasey Ford, the same age when she alleges Supreme Court nominee Brett Kavanaugh attempted to rape her. Sabrina’s “dark wedding” at 16 to Satan is first presented as a choice, and quickly shifts into something else altogether. It’s truly disturbing. And wraps the current #MeToo era in an interesting metaphor.

The fact that Sabrina continues to fight back against ancient patriarchal systems that keep women in cycles of oppression is an important message yesterday, today, and tomorrow. I hope as The Chilling Adventures of Sabrina develops they will focus on this aspect of girl’s and women’s agency, fury, and empowerment rather than the many other distractions negatively plaguing the show.

The Chilling Adventures of Sabrina premieres on Netflix October 26th.