Crossing Souls has been in the works for an extended period, initially powered by a strong 2014 Kickstarter campaign before being picked up by mega indie publisher Devolver Digital. The action-adventure features a cast of teens solving a neighborhood mystery that, invariably, threads into a slew of nostalgic callbacks and design touches that hark back to the American 80s. Keeping pace with these references, Fourattic‘s eye-catching booth on the PAX East floor was awash in mementos mori for a departed era, conjured as a living room of old board games, video game ephemera, beanbag chairs, and even a Magnum, PI pillow.

I’ve been thirstily waiting for a chance to play the game, largely based on its overall look and animation style. The gaunt and lithe pixelated characters and map perspective remind me of beloved 16-bit cult-classic Zombies Ate My Neighbors! and I was curious as to how the developers planned to leverage this design into a compelling story. With the recent runaway success of Stranger Things, it appeared that the game could not have picked a better time to finally chart its release date. Much like the Netflix show, Crossing Souls also seems to draw so many references to pop culture that the distinguishing space between homage and hodge-podge pool hazily.

For a title purportedly set for release this year (I don’t say this to be sarcastic, but because release dates can change with the wind), there is a lot at play here that doesn’t work. One of the most powerful references the game points to is The Goonies, evident in the main cast themselves and the initial game area. At the very start, you control a single character wandering through their cozy cul-de-sac to find their friends, and with each member of the crew you run into, you gain a new character that can be switched to by pressing the shoulder buttons. Each character has a unique attack and often a few special skills. For example, Math is a bespectacled science prodigy and has a laser gun and rocket shoes, whereas Chris is able to hit enemies and their projectiles with a trusty baseball bat.

Representation and diversity initiatives are of significant concern to me here, and to illustrate why, I want to recall another entry in Devolver‘s impressive stable: action roguelike supreme Enter The Gungeon. Both games share some interesting DNA, especially in terms of references; Gungeon obsessively recreates items and weaponry inspired by films and games, including a brick gun that shoots koopa shells, a sword which shoots a laser projectile if you have full health (much like the original Legend of Zelda), and so on.

However, while these references are practical and affect gameplay, they have no significant bearing on the narrative at all. Gungeon has a rather interesting series of storylines, all revolving around a dungeon built upon the worship and manipulation of guns. This philosophy isn’t window dressing, but seeps into every bit of real estate; tunnels are gun chambers, elevators are large bullets you can enter, and the purpose of the game is to find a gun rumored to “kill” your past by, well, shooting it.

Additionally, the characters you can select from reference retro-culture without stooping to its often primitive relationship to diversity. There is a pilot, a prisoner, a space marine, and a hunter, all of whom you can initially select from. In my opinion, it would’ve been lazy at best, and insultingly uninformed at worst, to make the prisoner character a Black person. So imagine how happy I was to find that the space marine was Black, the Hunter was a woman of color, and the prisoner a white woman, a woman who is actually (spoilers) the former leader of a group of cut-throat criminals.

Are these small, meaningless details? To me, it’s proof-positive that Gungeon did not seek to slavishly ape its many inspirations, and took responsibility for being a modern game in a new era, albeit one stumbling over itself to produce a trove of satisfyingly nostalgia-scratching treasures, like a proton pack or the Polaris gun from Cave Story (both of which have mechanical collusion with their namesakes, by the way).

Let’s come back to Crossing Souls. There is a single protagonist of color, who is a young Black teenager in a tank top named…ummm… “Big Joe” (sigh). The aforementioned “nerd” character Math (sigh) is white, and his skills are related to science. Big Joe’s specialized skill is…pushing heavy objects.

I am aware of where this article will be published [hi BGN fam!], so I don’t feel the need to belabor how subtle yet incredibly problematic a decision this is, while also anticipating the most common responses from the internet choir: “Who cares?” “Why does it matter?” “Having a single Black character more closely echoes the era that the game is referencing.” I care, and it matters deeply. When Black characters in games are still relatively rare, despite some strong showings in 2016 (off the top of my head, both Mafia III and Watch_Dogs2 broke stereotypical standards and were excellent games to boot), these are details that we pay attention to. The experience leaves us in a position where a game seeking to echo nostalgia simultaneously bears no interest in respecting the people of color who may want to share in that nostalgia when playing it, and instead ends up in the exact opposite result: reminding us of how much of the pop culture that was constantly thrust in our faces during our youth was inescapably white. I’m not sure that any of us require these reminders.

The de facto lead (and white) character in the game, Chris, lives in a suburban 2-floor house (I’m going to blow your mind: Big Joe lives elsewhere, undefined in this demo, but I’ll go out on a limb and say it’s somewhere within The Urban Landscape). Chris has two parents, while Big Joe seems to have a single mom parent, although the demo may have simply opted not to show her counterpart on-screen. Chris learns how to use his signature bat by knocking back baseballs with his dad in the yard. Big Joe, on the other hand, shows you his skills by pushing his mother’s apple crates into a loading area. Math can hover, Chris can climb, but Big Joe is slow and has little in the way of navigation abilities, which means you will probably avoid using him as your primary selected character. Let me put this in other, critically honest words: you’ll probably switch to him when you have to perform physical labor. 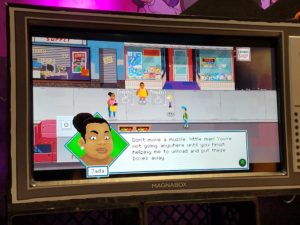 Furthermore, being forced to switch between characters to take advantage of each set of skills does not exactly render teamwork as the meaningful mechanic, which itself contradicts a primary theme of Crossing Souls: You’ll simply switch back to a character to keep as your general “traveling around the neighborhood” pick (I’d imagine Math or Chris, since some of their skills relate to movement), then swap to others to get into a quick fight. The potential significance of one of the characters being Black and body-atypical is lessened when there appears to be little reason to leave him selected by default.

Just like an old Final Fantasy game, encountering specific story beats will prompt a cut to a type of narrative scene where the other four then-unseen characters materialize, before disappearing once you regain control. Again, this does not exactly communicate camaraderie or scrappy togetherness, nor does Chris’ romantic obsession with Charlie, rendering the single female protagonist an object of lust and desire. To this last point, I will admit that I don’t know where the story intends to take these ideas, and it might yet have some surprises for us, nor am I denying the existence of adolescent infatuation or hormonal frustration…it just seems archaic, and aligned with the rest of the presented story.

Getting back to an objective read of the narrative at this point…it needs tremendous work. Crossing Souls looks fantastic in action, but then you start reading. Soon you’ll notice that most every character has an identical “voice” in the text, using the same verbal tics and filler words, speaking in droning, endless swaths of click-through exposition that never really arrives anywhere real or resonant. As previously mentioned, the game is awash in reference jokes, primarily based on words or images that appear similar to the real games, rockstars, films, or other pieces of pop culture that the game is numbingly trotting out for the player’s perusal. This becomes tiresome, eventually annoying, and did not amuse me once in the 50 minutes I spent on the demo. I’ve used the word “uninformed” at least once in this article, but it bears repeating.

I’ll give you a specific example: there is a street gang in this neighborhood named The Purple Skulls. When you finally run into them for a fight, you’ll find that their leader is a cartoonishly effeminate simulacrum of Prince. What exactly is the point of this reference, and why characterize Prince in this way? To me, this reeks of misogynistic vilification, and in a game where Blackness is already being presented problematically, this is egregious. Are they referencing him here because the gang’s color is purple? Are they aware of any other gangs that rep this color?

Look, the development team for this game is based in Spain, and I’m willing to bet that there are translation issues in what I’ve played. I truly, truly hope that some of the details presented above are re-examined prior to the game’s release. While our present-day pop-culture train is on a full-tilt scramble for retro revival – and I am admittedly seated on this train myself clutching a first-class boarding pass – I believe that we can celebrate the histories of our genres responsibly and with purpose. As it stands, the current demo of Crossing Souls leaves a lot to prove.