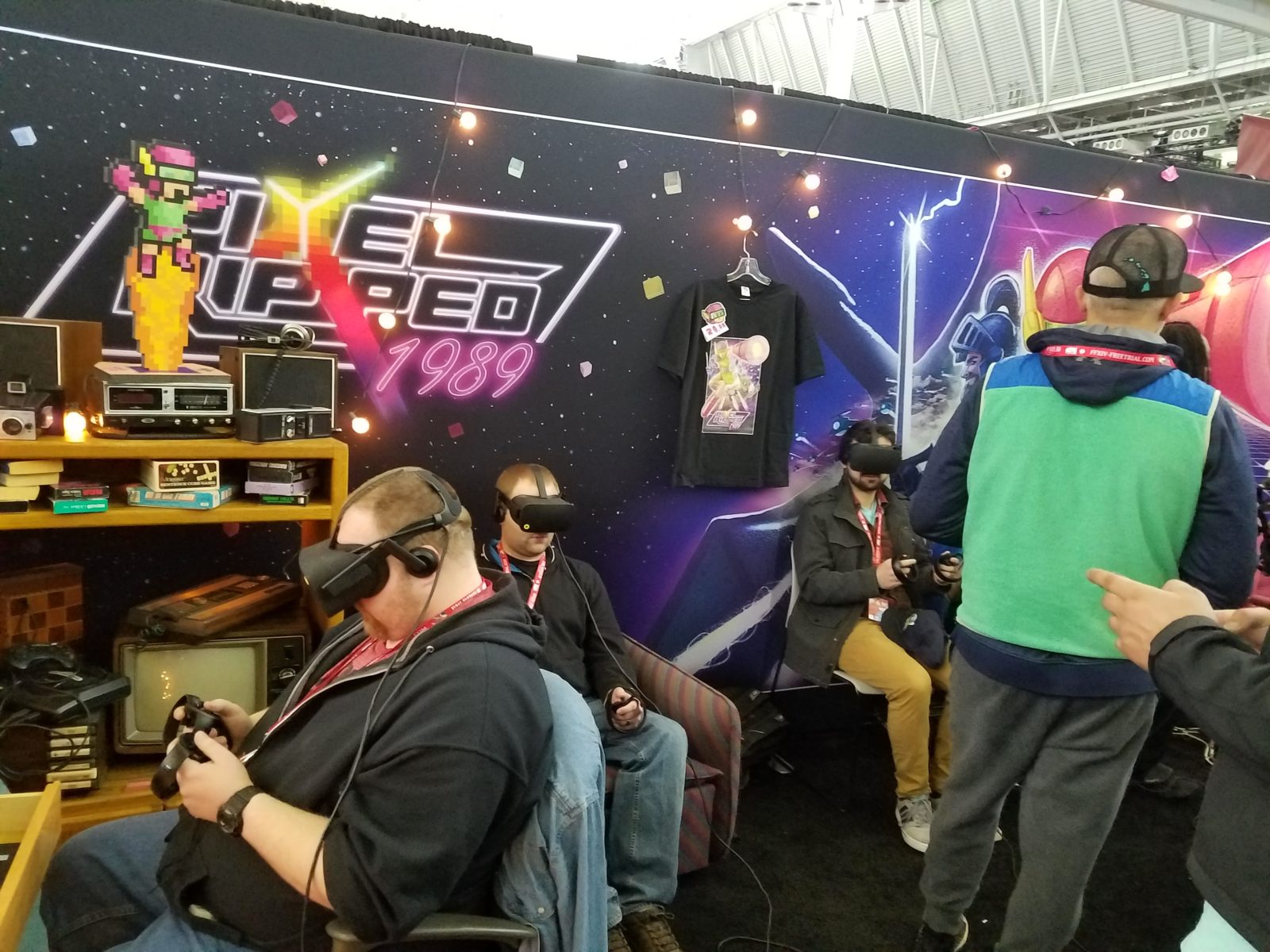 Pixel Ripped 1989 is my definite pick for PAX East’s game of show, full stop. Hot off the heels of a lauded appearance at GDC, the upcoming independently-developed experimental VR game presented a beautiful and energetic booth at the farther edge of Boston’s expo floor, replete with 80s artifacts like slap bracelets, VHS tapes, Atari consoles, wood-panel televisions, and shutter shades, as well as a cosplaying lead developer in the form of Ana Ribeiro.

At a glance, Pixel Ripped 1989‘s entire presentation may appear familiar in the wake of the 80s nostalgiac set-dressing dominating pop culture of late, but it’s meaningfully crucial and illustrative to the experience, and far from a cheap ploy. Its high concept combines an absurdist classroom portion where hiding your portable game system from the teacher is as important as beating the game-within-a-game that you’re playing—both mechanics are integral to the game experience itself.

In its first moments, you find yourself in the shoes of a pixelated character living in a pixelated, gameboy-ish black-and-white (or, more specifically, black-and-greenish) 2D environment, a hallucinogenically disorienting but strangely pleasant and comfortingly monochromatic and blocky 3D space. Turn to your right and your character cheerfully sticks her tongue out at herself in the mirror, and a screen in front of you begins to tell a story of a great evil threatening the land through low-rez televised news reports.

Soon enough, the game’s lead antagonist shatters the room you’re in, clad in angular robes and shattering chunks of pixelated masonry asunder, setting the game’s overarching plot into motion. Thrust into a more polygonal, multicolored reality, you discover a young nine-year old girl stuck in class, magically given a metaphysical portable gaming handheld system to play in secret, enlisted as the only person in the world who can halt this menace with her mad gamez skillz yo.

It gets exponentially crazier from there, but Pixel Ripped 1989 isn’t occluded by novelty; the game, as well as the game-within-the-game, are both stylistically refined yet possess remarkable depth. Even in my short fifteen minute demo, I noticed plenty of nooks and crannies to explore in the platformer portion, constantly forgoing certain areas which all featured flavor text and secrets, many of which reflected the world outside (or, um, inside the VR space. Self-describing location in this game gets really confusing). It also functions as great, somewhat simplistic action-platforming fun, with the VR hand controllers serving as an ersatz virtual portable gaming system keenly, making you feel like you’re holding an interactive device in a virtual space. Or, as Ribeiro puts it, “There are different layers, kind of like Inception for video games. Sometimes you are inside the Gameboy world, and sometimes you are outside of it.”

Functioning in part as a kind of love-letter to the Gameboy—and to portable gaming, gaming in secret, and adolescence in general, three concepts which feel relentlessly, poetically, meaningfully linked—Pixel Ripped 1989 is resoundingly fresh and alive, with every minute bursting with character and strangeness. The classroom you’re in might become engulfed in lava, or be invaded by celebrating soccer players. Ignore the classroom around you for too long and you’ll be harangued by the teacher and your classmates, creating weirdly spooky moments which surprised and discombobulated me, more than I would expect.

And the graphics themselves, in either incarnation, are not striving for photorealism, creating an intentionally surreal and absurdist palette that just repeatedly feeds into the concept, fostering a thriving feedback loop that intensifies the longer you play. It’s rampantly breathless.

“Gameboy was not the main console of my childhood. I actually played more Megadrive,” Ribeiro describes when I press her on the use of the all-but-named Gameboy in the game. “But you chose it for this game!” I insist, somewhat perplexed. “It’s not the only console we’re doing. We’re going to be releasing 1978, we’re going to try to release a new game every year. 1983 will be arcade machines. 1995 will be the fight between Nintendo and Sega. 1999 will be the first 3D games, like Nintendo 64.”

In person, Ribeiro is breezy, casually chatty (though possibly also exhausted after touring the game at several conferences this quarter), but immediately renewed with energy when discussing video games. She’s also decked to the nines, cosplaying her character from the game, a masquerade which seems wonderfully linked to her identity, and I rarely see a photo online without her helmet. Maybe this is one of the reasons that Pixel Ripped 1989 feels so exciting—there is so much of the developer inside the game itself, making Ribeiro’s neon-hued outfit an additional layer to the experience. Or, in other (clumsier) words: she’s the gamer outside the game about playing a game who inspired the game(s).

I find myself chatting with Ribeiro about the apparent complexity in this experience, and about how hard it is to describe it. In the course of my own attempts at doing so, she interrupts the notion of isolating one half of the game as more important than the other: “Both are important. The game within the Gameboy? It’s a game you try to finish. But to finish this game, you have to look around and interact with the ‘reality’ around you, the teacher, the nerds. The reality affects the game. [Pixel Ripped 1989] is like a game [experience] about being a gamer, because you can never really just play a game, there’s always something in your way. So that’s part of the gameplay.”

Pixel Ripped 1989 began its chromatic existence as a one-woman project (an impressive origin for a VR game, btw), with Ana Ribeiro teaching herself game development in relative solitude during its gestation period. Growing up in Brazil, was she encouraged to pursue games development as a career? “Ohhhh no. My small town is like, in the countryside of Brazil. I never met anyone who made games, I had no idea where they came from. Then I grew up, not knowing what I wanted, and ended up getting a psychology degree.”

So what’s the Brazilian game development scene like right now?

“It’s pretty much indie, which I like. Not a lot of AAA companies there.” With growing attention on South American development—including Brazil’s burgeoning BIG festival—this detail might very well change, ushering in fresh concepts like this one, and countless more to come.

While VR experiences have been slowly increasing in quality and creativity, there is always a part of me that fears the rampant march towards realism (and militarism) will somehow take priority over unique experiences unapproachable in any other gaming medium. This is why Pixel Ripped 1989 inspires me so much, and why I can’t wait for the rest of you to play it for yourselves.

Look out for Pixel Ripped 1989‘s upcoming release date on May 22nd on PSVR, Oculus and Vive and, in the meantime, feast on your eyes on its newest trailer:

#BGNPAXEast: Return to The Abyss in ‘Underworld Ascendant’