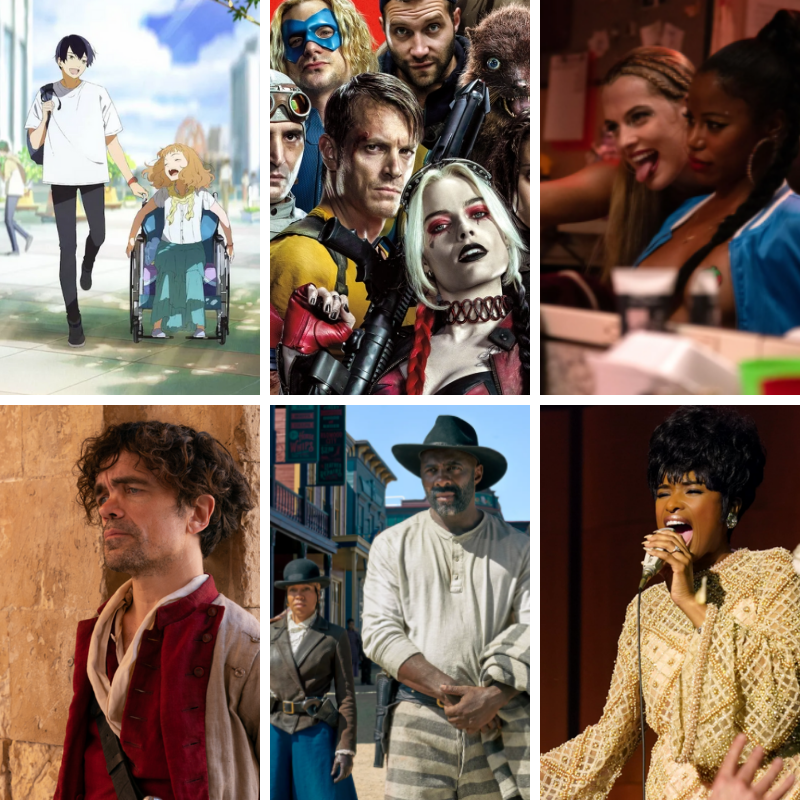 This has been quite the year for cinema, starting with critically acclaimed hits in January during Sundance all the way to awards season, which is currently in full swing. We here at Black Girl Nerds are excited to share with you some of our picks of what we consider the best films of 2021 by a select group of esteemed film critics.

From big-budget comic book films to independent flicks, our team provides a shortlist of our favorites and why these selections have resonated with us so much this past year.

What a remarkable film about the origin story of the dynamic Williams sisters told through the lens of their father Richard Williams (Will Smith). Smith delivers an impeccable performance in this incredible narrative along with actor Aunjanue Ellis who plays mother and wife, Brandi Williams. My hope is that Ellis will get an Oscar nod for this role and that the film will earn a Best Picture nod. It’s a perfect family film and contains all of the elements of a feel-good story. The awards attention it is currently getting is well-earned.

During a season where multiple biopics and documentaries about the illustrious Aretha Franklin were released, Liesl Tommy’s Respect stands out the most. Jennifer Hudson was perfectly cast playing the late Queen of Soul in a film that truly captured the highlights and lowlights of Ms. Franklin’s career. Tommy’s direction showed that Hudson felt comfortable playing the role. It didn’t come across as an imitation of Franklin, but a fully fleshed-out, inspirational portrayal. The costumes in this film were absolutely incredible and are filled with so much historical detail and accuracy of the film’s era. Respect also has a beautiful ensemble cast and music that resonates so deeply you’ll have to get the soundtrack immediately after watching.

The Eyes of Tammy Faye

One of the most compelling stories of our history is the televangelist scandal that occurred between the husband and wife couple Jimmy and Tammy Faye Bakker. Jessica Chastain delivers one of the best performances of her career depicting the controversial figure. Her cadence, laugh, and execution of Tammy Faye’s persona was spot on. The story also stuck true to the true events of the Bakker family’s timeline and didn’t take on too many creative liberties as many biopics tend to do. The gaudy costumes, makeup, and zingers from Tammy Faye are moments that give a unique identity to this film, which earns it a spot on a best films list.

I do have a sweet spot for Peter Dinklage. However, this film truly swept me off my feet.  This fantastical stage musical adapted for the big screen delivers incredibly passionate performances notably by Dinklage, who plays the titular character Cyrano. Also, Kelvin Harrison Jr., one of the most talented and underrated actors in Hollywood, gives his all in this story about two men who fall for the same woman in a complicated love triangle. It’s such a beautiful film all around from the acting to the costumes — even the cinematography hits all the right notes.

James Gunn’s reboot/remake/standalone sequel fixed all of the problems in 2016’s Suicide Squad. It’s easily my favorite DCEU movie so far, and definitely my favorite comic book movie of the year. Cleo Cazo (aka Ratcatcher 2) and Harley Quinn (Margot Robbie) are well-developed, play integral roles in the story, and thankfully, have costumes that make sense. The many additions to the roster fit in perfectly with the existing members of the Squad. Gunn’s 1970s gritty action film style was exactly what the franchise needed, and I hope he makes more installments.

When it comes to live-action Disney movies, I don’t expect to be blown away, so I was absolutely floored by how much I loved the villain’s origin story. The cast and characters were amazing, especially Emma Thompson’s Baroness von Hellman, a delicious villain that makes even Cruella seem kind-hearted. The rivalry between the two fashionistas plays out through Jenny Beavan’s extraordinary costumes. Beavan was tasked with creating a fashion line for the Baroness, a ’70s punk wardrobe for Estella, and another for the extravagant Cruella, on top of all of the film’s characters and background character costumes. I’ll be surprised if she doesn’t win an Oscar. Disney’s Cruella is visually stunning but also gives the iconic villain a rich backstory.

How do I love Zola? Let me count the ways. 1) Janicza Bravo’s direction is like a concert on film. Every scene is filled with a feast for the eyes. Every frame invites you to indulge. 2) Taylor Paige, Riley Keough, and Colman Domingo — these three are dynamic on camera. 3) Jeremy O. Harris! His defense of Lena Dunham aside, this man is a genius and, along with Bravo, he concocted a script where the words came as naturally as they did theatrically. Zola was a moment and is not to be missed.

The Harder They Fall

Growing up, my dad would constantly watch Westerns. I hated them. A big part was the fact that Black people were nowhere to be seen in these narratives except as some sort of subservient character. Enter The Harder They Fall, a rootin’ tootin’ gun-slinging Western starring some of today’s most beloved Black actors along with those on the rise. The movie is bright and loud and Black and will have you screaming for more as the credits roll.

When Andrew Garfield was asked if he could sing in order to play the role of Jonathan Larson, he asked simply, “When will you start filming?” After being told they would start filming in a year, Garfield replied, “Then yes, I can sing!” Cut to him hiring a famous vocal coach and learning to play piano in order to do justice to such an enigmatic figure. He tears the house down. Along with stunning performances by Robin de Jesus, Alexandra Shipp, and a murderer’s row of Broadway greats, Tick, Tick…BOOM! is a worthy entry to any best of list.

Spider-Man: No Way Home — I literally can’t say anything about how amazing this film was without spoiling it, but definitely one of the best of the Marvel franchise this year, with Shang Chi and the Legend of the Ten Rings a very close second.

Shang-Chi and the Legend of the Ten Rings

Going beyond the action and fantasy elements of the film, Shang Chi introduced the Marvel Cinematic Universe’s first Asian lead and majority Asian cast. The film echoes an authenticity that not all Marvel films, or even films in general, achieve. Combining traditional Chinese folklore and fresh humor from Simu Liu and Awkwafina, the film gracefully balances world-building while integrating characters into modern-day San Francisco. This story was seamlessly woven into the larger MCU and builds anticipation for what the futures of these characters will look like.

Josee, the Tiger and the Fish

It was an undeniable treat when Funimation acquired this gem for American theaters in July 2021 in both the original Japanese as well as the English dub. There are few anime films that delve into the intersections of disability and romance. This movie not only depicts an underrepresented identity in anime, it crafts a magical tale of two young people trying to understand themselves, pursue their dreams, and navigate unique obstacles thrown their way. It challenges common disability narratives while also providing a beautiful love letter to the human experience in all of its complexity. (NOTE: It came out in Japan in 2020 but didn’t arrive in the US until 2021, so it’s on my 2021 list.)

Based on Nella Larson’s book, this black-and-white film presents a story may seem simple on the surface, but actually creates a deeply thought-provoking complexity at its core. It puts into question the social construct of race and identity while critiquing the superficial standards with which people weigh their own value and the value of others. The story is brooding and sorrowful while also connecting to ongoing conversations of colorism, privilege, anti-Blackness, and even the ways in which belonging can be impossible for those living between white and black, a shade somewhere in between.

The Subject is a chilling psychological thriller set in Harlem, NYC. Jason Biggs plays Phil, a white documentary filmmaker who gains financial and critical acclaim after one of the subjects, a Black boy named Malcolm (Nile Bullock), is brutally murdered. As Phil shoots a second documentary using different Black subjects to capitalize on success, Malcolm’s mother, Leslie (Aunjanue Ellis), skillfully forces Phil to face the consequences of his actions. Ellis’ portrayal of Leslie is not a performance but an authentic embodiment of Black motherhood. It was satisfying to see a white man be held accountable and deal with the consequences of his actions — what a ride.

The Lost Daughter follows Leda (Olivia Colman), a brilliant college professor, on a solo working seaside holiday. Leda watches a young mother, Nina (Dakota Johnson), and her daughter’s rocky relationship, which throws her off balance. Reminded of how she failed her daughters at that age, Leda becomes obsessed. Motherhood is not for the weak, and not every mother wants to be a mother. Olivia Colman’s performance is breathtaking. She melts into the character effortlessly. Her vulnerability and unpredictability raise the stakes and tension among the characters deliciously. Maggie Gyllenhaal’s direction is sublime.  Everything about this film is fire. We don’t often get to see portrayals of motherhood that reflect the complexity of the relationship between mothers and daughters from the female perspective. More, please.

The artist’s life is never easy. In musicals, the characters sing to express what can’t be said. In this gut-wrenchingly moving film, Jonathan Larson (Andrew Garfield) was a playwright, lyricist, and composer. He passed away suddenly the day of the off-Broadway premiere of his groundbreaking Broadway musical Rent. This film is a behind-the-scenes look at how grit is built in an artist. After graduating college on a full art scholarship, Larson worked at the Moonlight Diner in Manhattan for nine years while he wrote musicals. Andrew Garfield is absolutely fabulous as Larson. Lin-Manuel Miranda’s direction is splendid. He captures the NYC artists scene in the 90’s perfectly.  The brunch scene, which featured more legendary Broadway stars than I could count singing together marvelously, was iconic. The music and choreography danced off the screen. I’m thrilled this film is on Netflix to sing over and over again.

Stay tuned next week for our Worst Films of 2021 list!