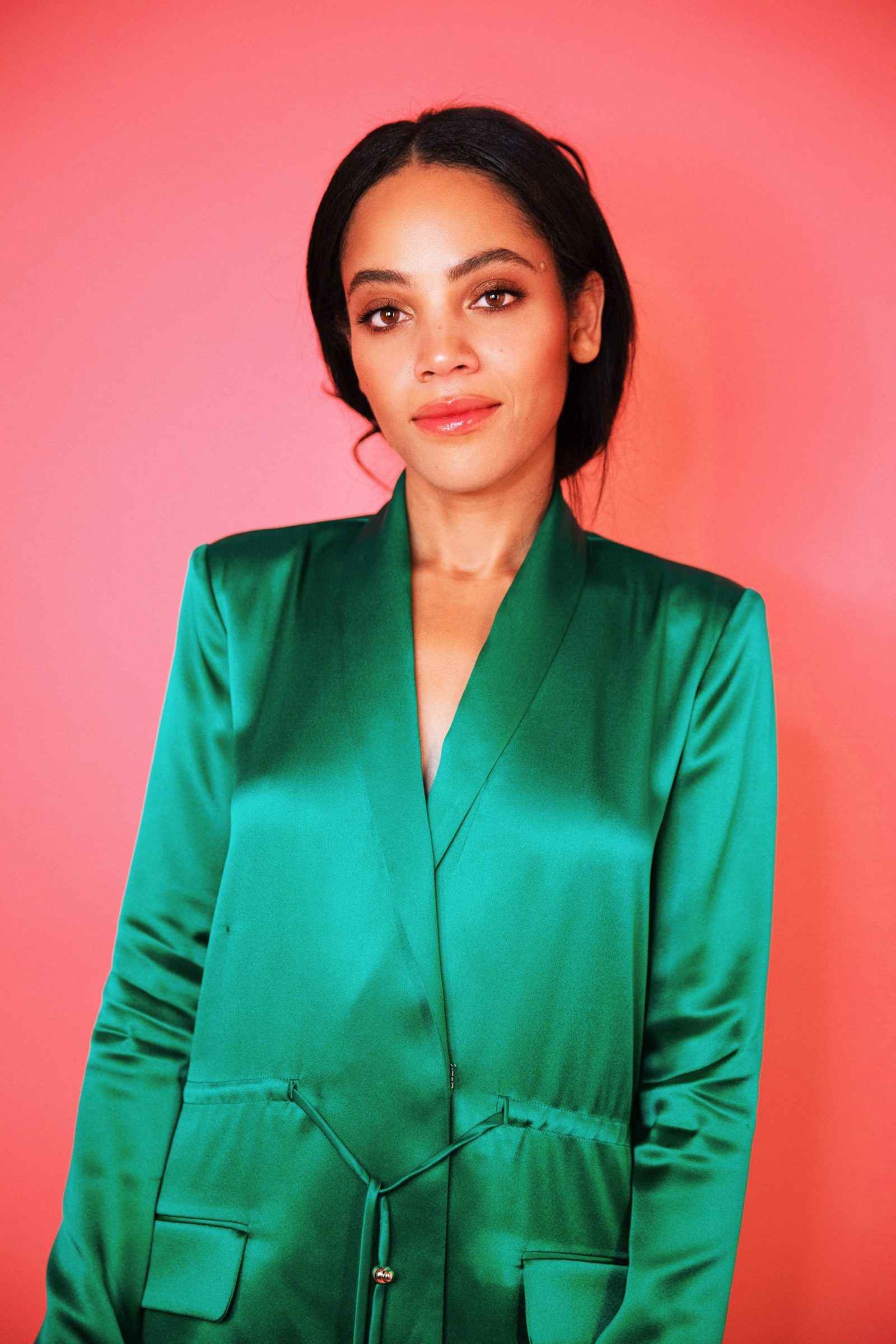 Actor Bianca Lawson is best known for her timeless beauty and work in TV shows such as Buffy the Vampire Slayer, Saved by the Bell: The New Class, Teen Wolf, The Vampire Diaries, Nikita, Pretty Little Liars, and Queen Sugar.

Tonight the premiere of Queen Sugar comes back to OWN TV and we’re excited to see what is in store for Darla and her complicated relationship with to Ralph Angel (Kofi Siriboe).

The step-sister to Beyoncé and Solange Knowles spoke about her upbringing in a family of entertainers, her career, what’s next for her in this new season of the Ava DuVernay produced series Queen Sugar and what the secret to her never-aging beauty is.

We all know Bianca has been around since the early nineties, and Kendra from Buffy the Vampire Slayer will forever live in our hearts. In an interview by journalist Joshua David, he asks Lawson how the industry has changed over the years.

“I feel like the quality of parts has improved. I feel like you’re seeing less of the best friend’s sidekick’s girlfriend or someone trying to take your man. I’ll get scripts and I would see what was offered to me and what the lead part was and thought that’s so interesting. I feel like I’m seeing better material. I think people want more diverse casting. It’s not perfect.”

On Being A Supporting Actress

The OWN TV series Queen Sugar is notably known for its diversity both in front and behind the camera with a total of 32 female filmmakers at the helm of this series now its fourth season. As Darla, Lawson plays a strong supporting character to Kofi Siriboe’s character Ralph Angel and throughout most of her career, Lawson has shown a great deal of versatility as a supporting actress.

For Lawson, it’s not about the number on a call sheet it’s about embracing who that character is and giving it her all. She chooses to be tactful about the roles she selects as well.

Growing Up In A Family of Entertainers

Bianca Lawson has grown up in a family of creatives. Her great uncle is Motown founder Berry Gordy. Both her mother (Denise Gordy) and father (Richard Lawson) have an impressive body of work in both television and film. And although the idea of Lawson being groomed into the position as a working actor would be inevitable, her parents didn’t want her to get into show business. Yet, Lawson has managed to sustain her career throughout all of these years and is successful at it.

“I think it gives you a perspective. It allows me to kind of take nothing personally. And I think the thing in an environment with what’s possible, and with my mom and my uncle Berry it is, so, so inspiring. If you’re in an environment where people are creative, it makes you feel like, ‘Oh yes I can do that too’. And it is a possibility. But you also see the downside and I think, my parents were just more like, go to school, be a child.”

Her parents believed the industry was nebulous and that her skills were better served in more traditional career paths like becoming a lawyer. And while supporting her, Lawson’s parents did strongly advise on how challenging this industry can be. However, Bianca Lawson has proved that she can do anything if she puts her mind to it and obviously her long-standing career speaks for itself. The seeds planted provided a strong foundation for the actor growing up. Her parents instilled valuable life lessons like being a good person and not letting the ego of the entertainment industry get to her head.

Lawson also learned important lessons on the issue of failure from her famous uncle Berry Gordy.  During a four-hour breakfast with him one morning, he told her that he has failed millions of times. However, his sisters who also owned their own businesses believed in him and invested in him. They continued this because they believed in their brother, which gave the legendary entrepreneur the tenacity to keep going even when the grass wasn’t so green on the other side.

On What to Expect for Darla this Season

And the grass isn’t so green among the Bordelon family now that Nova (Rutina Wesley) is publishing a tell-all memoir. The book contains intimate family secrets and everyone is in shambles after reading it. When asked if Darla will be impacted in the process here’s what Lawson had to say:

“She is going to be impacted. It’s a day of reckoning, right? It’s a big script. It will impact every facet of her life. Her practical life in terms of her job, her emotional life. This is like a test unlike any other. It’s going to be an earth-shattering thing.”

As a former addict, Darla is a character who has been on a tough road to sobriety. And the road can be a lonely process. Lawson explains how playing Darla impacted her skills as an actor.

Lawson describes Darla as that light that tethers forward and never moves backward. Darla has been carrying the weight of a secret in her soul and in this new season, for Darla truth and transparency are important. This new season will explore what family truly is and that its more than just being bound together by DNA. Lawson has fostered this great chemistry on screen with actor Kofi Siriboe over these past few seasons.

Lawson says, “Sometimes you just stumble onto a person and you operate on a similar frequency. I love working with Kofi because I think he gets me really well. I get him really well and it’s just always been to be kind of easy like that.”

Darla’s son Blue has matured and as kids grow older the dynamic in their relationships with their parents begin to shift. In season four, Lawson says we are going to see some hard truths come to the fold in their relationship and she also reveals that no one’s life will be the same after this book is released. 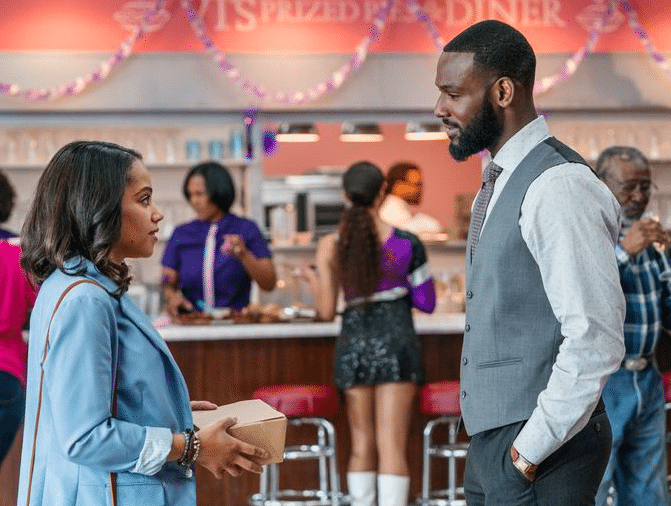 On the subject of Darla and Ralph Angel’s complex relationship and what is to be expected of their story arc in season four, Lawson had this to say:

“They’ve grown up together in a way. If the love is real, it will never die. I don’t know how the season is going to end, but I can only give you what I’m told when I’m shooting. I think when the chips are down, they keep circling back to each other. So we shall see if they circle back to each other. I have to co-parent and they have to deal with each other. I will say, don’t lose hope.”

The pressing question fans and just about everyone has about Bianca Lawson is her secret to aging backward. This is an actor after all, who played a 17-year old within the last 17 years. While many expect to hear a secret fitness regime or diet that Lawson uses as a remedy to fight aging, her answer is simple, just enjoy life and live it with passion. That is her secret to staying young.

“I think a part of it is not stressing out about it and using the same products forever. My Dad is always busy and always doing something and going forward and living your life that keeps you youthful. Living a healthy lifestyle, staying out of trouble, and keeping things very simple [is what I do]. I’ve seen people who have aged 10 years in one year, and they had their passion, their purpose, they were working, and they were really active in life and then something happened and they lost that thing.  I think being on pause and not engaging in life anymore you don’t feel as fulfilled.”

Sounds like Bianca Lawson needs to write a book on this topic because if this is her secret to aging, I want to know more about how to live life right!

Season 4 of Queen Sugar premieres tonight June 12th on OWN at 9/8c.

Interview conducted by Joshua David and editorialized by Jamie Broadnax

Joshua David – My strategy in business & social media is taking any complex idea & formulate a plan of action that efficiently and effectively provides clarity through content. I can build a rapport with anyone and appreciate thought leaders who spark discussions from a simple statement.
email: askjoshuadavid@gmail.com
Instagram: https://www.instagram.com/askjoshdavid
Jamie Broadnax – Jamie Broadnax is the creator of the online community for Black women called Black Girl Nerds. She’s the primary film critic for BGN and is a member of the Broadcast Film Critic Association.